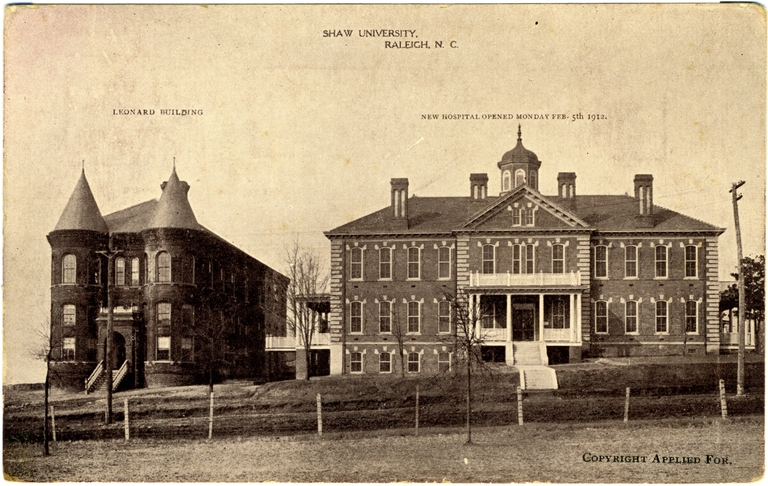 Gaston Alonzo Edwards (April 12, 1875-1943), architect, taught at Shaw University in Raleigh and designed some of its buildings as well as others in Raleigh and elsewhere. He was the first black architect licensed in North Carolina and the only registered black architect in the state for many years. Along with Louis H. Asbury of Charlotte, Edwards was among the first professionally trained architects who was born and practiced in North Carolina.

According to his granddaughter and biographer, Hazel Edwards, who traced his career from family documents and recollections and additional research, Gaston Alonzo Edwards was born in Chatham County, North Carolina, one of six children of Mary Edwards, a woman of color, and William Gaston Snipes, a white farmer. The United States census of 1880 listed Mary Edwards, aged 29, as the single head of household of a family that comprised four sons, including Alonzo, then aged six. William G. Snipes, 38, was a single man living alone in the next household. State law at the time forbade marriage among the races.

Gaston Alonzo Edwards began working at an early age to help his family and to save money for college. When he was 21, Edwards entered the Agricultural and Mechanical College for the Colored Race (present North Carolina A&T University) in Greensboro, where he graduated from the architecture program in 1901. After graduation Edwards took additional coursework at Cornell University, where he was listed among the students who had taken short courses (held in the winter and summer) in the decade 1899-1908.

After completing his schooling, Edwards moved to Raleigh, where he established the mechanical department at the state school for the Deaf, Dumb, and Blind for black students. Soon after this he joined the faculty at Shaw University, initially to teach natural sciences and to superintend the industrial department, which included building trades. He developed his architectural practice along with his academic career.

At Shaw, Edwards became responsible for the university’s building program, and he planned and superintended construction of key buildings there. As at some other black colleges, students were often involved in constructing campus buildings. Prime among those Edwards planned and managed construction for at Shaw was the Leonard Medical School Hospital (1910), a large brick building now known as Tyler Hall. It was funded in part by the American Baptist Home Mission Society. (The Leonard Medical School was established in 1882 in a towered building that stands next door to Tyler Hall and is known today as Leonard Hall; it was the nation’s first four-year medical school for black students.)

Near the campus, Edwards designed the Masonic Building on South Blount Street, formally called the Widow’s Son Lodge No. 4 and Excelsior Lodge No. 21 of the Free and Accepted Masons.

Edwards also became architect for the rebuilding of Raleigh’s largest black church, St. Paul’s A. M. E. Church, a project previously credited only to local white architect. In July, 1909, the imposing brick edifice, built over several years by Stewart Ellison and others, burned, leaving only the brick walls standing. Immediately leading citizens, black and white, began to contribute to its rebuilding, a project that proceeded rapidly, reusing the surviving brick walls. The architect for the rebuilding has generally been identified as white Raleigh architect H. P. S. Keller.

Recent research, however, shows that publications of the time name two different architects for the rebuilding: H. P. S. Keller and G. A. Edwards. The Raleigh News and Observer of September 4, 1909, and the Manufacturers’ Record of September 9, 1909, published notices seeking bids for rebuilding St. Paul’s from plans and specifications by Keller. In the same period, however, articles in northern and western newspapers lauded Edwards’s accomplishments including his role as architect for the church. The Indianapolis Recorder of August 28, 1909 stated, “An example of what thorough preparation will do for those who are willing to qualify themselves for the higher duties of life along educational lines is found in the thrift and industry of G. A. Edwards of Raleigh, NC. . . . He is now designing the new A. M. E. church at Raleigh. The old church was recently destroyed by fire.” Similar accounts appeared in the Denver Franklin’s Paper the Statesman of August 28, 1909, and in a much longer article about Edwards in the Charleston, W. Va. Advocate of March 3, 1910, which noted that he had been “given the contract of designing and superintending the construction of St. Paul A. M.E. church, Raleigh, which is to take the place of the old church which was recently destroyed by fire. The new church, when completed, will cost about $75,000” Moreover, in a letter of August 5, 1911, published in the Charlotte Observer of August 9, 1911, James B. Dudley, president of the A&M College in Greensboro, pointed out among the accomplishments of its graduates: “It may also interest you to know that St. Paul’s A. M. E. church of Raleigh, one of the most imposing and beautiful structures in that city, and one of the best churches the negroes have in the country, was planned and designed by a negro who got his architectural and mechanical training at the A. & M. College. He is now in charge of the industrial department at Shaw University. . . .” Clearly Dudley was referring to G. A. Edwards, whom he knew well. Further research may clarify these architects’ roles in the project.

Edwards attained considerable prominence and recognition in his field. A story in the Afro-American Ledger (August 28, 1909) cited him as a “rising young architect” of excellent reputation. In 1912 he was appointed by the governor of North Carolina to serve as a delegate for the third annual Negro National Educational Congress.

According to a biographical sketch of Edwards published in 1917, “On March 25, 1915, the General Assembly of N. C. passed an act requiring all architects to be examined, licensed and registered. Prof. Edwards not only passed the board successfully but enjoys the distinction of being the only registered Negro architect in North Carolina.” His business cards, as Hazel Edwards notes, highlighted this qualification: “Never build without a plan, consult G. A. Edwards—the only Negro licensed to do business in North Carolina.” Edwards applied for and received his licensing certificate, #54 in the official record book, on July 22, 1915, the only man of color among the initial group of architects whose licenses were granted because they were practicing prior to 1915. According to the 1917 account, “He cares but little for the frills and fads of architecture, but adheres strictly to the three Fs in designing, Fit, Firm and Fair. As a result he enjoys a liberal patronage from the white people as well as from his own race.” Although Edwards designed numerous buildings, including many residences, none has been identified thus far except for the Masonic Building and Tyler Hall.

Edwards married Catherine Ruth Norris, a music student at Shaw, in 1909, and they had five children. In 1917 the family moved to the small Vance County town of Kittrell, North Carolina, where Edwards became president of Kittrell College. In 1929, the family moved again, to Durham, where Edwards planned to continue his architectural career. He was listed there in the U.S. census of 1930 as an architect, along with his family. He designed houses and other buildings in Durham, which remain to be identified. (He is recalled as having had a role in designing the North Carolina Mutual Life Insurance Building for the leading black-owned insurance firm; however, the existing building of the firm in Durham was built in 1921 from designs by Rose and Rose.)

With the onset of the Great Depression and the drop in construction work, Edwards re-entered educational employment as principal of the Lyon Park Elementary School and the Whitted School, while continuing to design houses in Durham. He took a prominent role in Durham business and civic affairs as a board member of the Mechanics and Farmers Bank and other institutions and the Durham Committee on Negro Affairs. In Durham, the family resided in a house at 1712 Fayetteville Street, built ca. 1912; Gaston and Catherine Edwards lived there until their respective deaths in 1943 and 1972. Their daughter Hazel married Alex Rivera, who became a well-known photographer, and the couple lived there for a time.