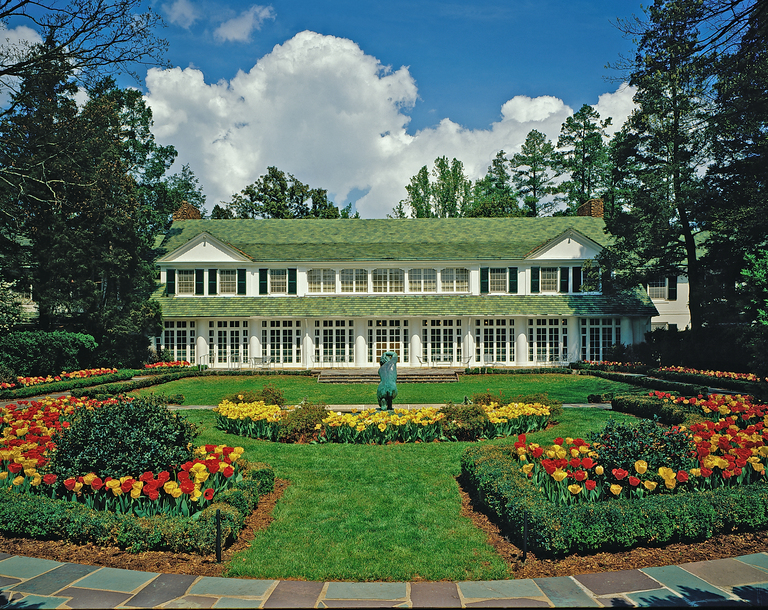 Charles Barton Keen (1868-1931), a prolific designer of suburban residences and country estates primarily on Philadelphia’s Main Line for more than thirty-five years, added a second locus of activity—North Carolina—when he became a favorite architect of wealthy tobacco and textile families starting around 1912. In several of his projects in North Carolina he was associated with landscape architect Thomas Sears. His best-known project in the state is Winston-Salem’s Reynolda (1912-1917) for Katharine and R. J. Reynolds. On the strength of that commission he found a wider clientele associated with the state’s unprecedented industrial wealth of the early twentieth century and who in the 1910s and 1920s were advancing the national trend from downtown living to country houses or newly created elite suburbs.

Born and educated in Philadelphia, Keen was the youngest of three sons of Harriet Emily Ide and banker Charles Burtis Keen. He studied architecture at the University of Pennsylvania (B. S. 1889) just prior to the formal establishment of Penn’s school of architecture. After travel in Europe, he worked for a year (1889) as a draftsman for Penn’s architectural school’s founder Theophilus P. Chandler; he then worked for two years (1890-92) for his cousin Frank Miles Day, an English-trained architect, Arts and Crafts advocate, and one of the three founders in 1901 of House and Garden, a monthly magazine of country house architecture. Keen also took classes at the Pennsylvania Museum and School of Industrial Art (1890-1891; 1891-1892), along with his future partner and colleague in Day’s architectural studio, Frank E. Mead (1865-1940).

Keen and Mead’s early practice (1893-1900) was primarily residential. Exploring an eclectic mix of Spanish Revival, Georgian Palladian, and Arts and Crafts motifs, the young architects designed semi-detached (duplex) houses for real-estate developers in the inner suburbs of Philadelphia as well as grander dwellings in Radnor and other prestigious suburban towns known for their locations along the Main Line of the Pennsylvania Railroad northwest of the city. They hit their stride with Swarthmore Lodge, an Arts and Crafts bungalow connected by a pergola to its hilltop landscape setting in Bryn Mawr, which was the first feature in the inaugural issue of House and Garden (June 1901). The partnership ended when Mead moved to San Diego, eventually to partner with Irving J. Gill and Richard Requa. Keen was left with an established practice that included country estates, summer places, and suburban residences in and near Philadelphia, Pittsburgh, Atlantic City, and Saratoga Springs.

Keen’s amiable nature, social skills, and design expertise surely appealed to his clients, many of whom commissioned several projects from him over the years. Gregarious and athletic, in his student days at Penn he participated in an array of collegiate sports, social clubs, and elected offices. He became an avid and accomplished golfer, and at the 1920 winter tournament at Pinehurst, North Carolina, he won his division as a member of the prestigious Pine Valley Golf Club. He was a regular exhibitor of the T-Square Club, an important venue for informal design competitions and professional fellowship of the Philadelphia Chapter of the American Institute of Architects. His early designs appeared in many books on country houses and in periodicals from Architectural Record to House and Garden_to the _Ladies’ Home Journal.

Keen was one of many architects working on Philadelphia’s Main Line, which had become an influential center of suburban and country house design at the turn of the twentieth century. Like other Philadelphia country house architects including Wilson Eyre, Horace Trumbauer, William L. Price, Brognard Okie, and Mellor, Meigs and Howe, his work represents a core esthetic—sensitivity to site, integration of house and garden, appreciation for local building materials, and restrained mingling of colonial vernacular, Arts and Crafts, and academic tradition.

Far more significant was Keen’s design for Reynolda, the 1,067-acre country estate north of Winston which he and landscape architect Thomas Sears planned for R. J. Reynolds and his wife, Katharine. Under construction from 1912 to 1917, the estate was intended to be self-sustaining with its own power plant, blacksmith shop and service station, farms and gardens, and greenhouses. In the main residence, called the “bungalow,” despite its large size, Reynolda’s distinctive architecture, featuring white stuccoed walls, massive local stone foundation, and green-tiled roof, extended shed dormers, deep-set porches, and heavy columns, transported Keen’s Main Line bungalow idiom to the Piedmont. Its picturesque village—with church, schools, post office, boat house, and housing for black and white workers, and a progressive farm complex including cow and dairy barns architecturally similar to the main bungalow—was like nothing Winston-Salem had ever seen. Gracious gardens by Sears, tended wooded areas, a 16-acre lake, and facilities for swimming, tennis, and golf showcased a leisured lifestyle.

While not rivaling Asheville’s Biltmore (see Richard Morris Hunt), Reynolda looked “magnificent” to locals, who also appreciated Katharine Reynolds’s interest in making Reynolda an “experiment station” to improve rural life. It also dramatized the transition from downtown to suburban elite living. Despite R. J. Reynolds’ death in July 1918, and Katharine’s remarriage to educator Edward Johnston in 1921 and her death in 1924, Reynolda established Keen’s and Sears’s cachet in Winston-Salem and the surrounding Piedmont. A Reynolds descendant observed that Reynolda became Keen’s great “selling card.”

Although the majority of Keen’s North Carolina work is in Winston-Salem, his first commission after Reynolda was the expansive (13-bay) Alexander Worth McAllister House (1918-1919) in Greensboro’s exclusive Irving Park golf club suburb for Pilot Life Insurance founder, real estate developer, and country club advocate McAllister. Keen soon designed other Irving Park houses for Clement C. Wright, attorney and president of Wright Hinge and Lock Company, and for Mary Richardson Preyer and H. Smith Richardson, children of Vicks VapoRub inventor Lunsford Richardson. The focus of Irving Park was the Greensboro Country Club, and after the third clubhouse burned, Keen designed a new one in the grand bungalow style associated with Reynolda and with his most famous golf clubhouse, Pine Valley in New Jersey (1914). Local tradition holds that Keen also designed several residences for the Mebane family adjacent to the golf course.

In the 1920s Winston-Salem was North Carolina’s biggest and richest city, and the R. J. Reynolds Tobacco Company was America’s most successful cigarette company; its decision to shift stock and voting power into Winston-Salem hands resulted in great local wealth. Other industries such as the P. H. Hanes Knitting Company, Chatham Manufacturing Company, and Wachovia Bank and Trust Company further enriched the local economy. Winston-Salem’s “era of success” ushered in a building boom not only downtown but in the new suburban and country house neighborhoods. Working with the second-generation beneficiaries of the Reynolds, Hanes, and Chatham tobacco and textile dynasties, during the 1920s Keen and Sears developed a network of interrelated and intermarried clients receptive to their experience in country house design and élite social practices. Some twenty Keen houses are extant today, many in exclusive residential neighborhoods designed by Sears. Several were for Reynolds family members including R. J. Reynolds’s nieces, Senah Critz Kent, Nancy Critz O’Hanlon, Mary Critz Follin, and Ruth Critz Gray, and Katharine Reynolds Johnston’s new mother-in-law Lola Johnston commissioned Keen houses in Reynolda Park, a “high class residential subdivision” planned by Sears adjacent to the Reynolda estate.

Among the other tobacco and textile families in Keen’s clientele during the 1920s, the Hanes and Chatham families built several Keen houses in Stratford Place, an exclusive and spacious neighborhood developed on land formerly owned by John Wesley Hanes and planned by Thomas Sears—French Classic Revival for Lucy Hanes and Thurmond Chatham, Georgian Revival for Robert and Mildred Hanes, and Tudor Revival for Frederick and Elizabeth Hanes. Keen also crafted grand classical revival houses on estate-like lots in Buena Vista for J. W. Hanes’s brother Alexander S. Hanes and cousin P. Huber Hanes, Sr. Other commissions for suburban residences came from Winston-Salem bankers, lawyers, and businessmen who participated the city’s prosperity, such as the Stockton brothers, banker Richard and clothier Norman; lawyer Bunyan Womble; and furniture manufacturer B. F. Huntley. In 1928, Keen and Sears collaborated on Robert E. and Nancy Lybrook Lasater Estate (Forest Hill Farms), a 1,400 estate overlooking the Yadkin River, for clients who had commissioned Keen’s first house in Winston-Salem some 16 years earlier.

Already associated with golfing and country club life in Winston-Salem and Greensboro, in the late 1920s Keen also attracted commissions for residences in Hope Valley, the golf and country club suburb of the booming tobacco city of Durham. In the mountain golf retreat of Roaring Gap west of Winston-Salem, where many of his clients summered, he may have designed summer places for E. H. Griffen and Aubrey L. Brooks of Greensboro; he evidently made plans for the Roaring Gap Club and chapel, but it is unclear if he designed the extant buildings.

During the busy decade of the 1920s, Keen juggled his time between Philadelphia and North Carolina, as did his protégé and on-site architect William Roy Wallace (1889-1981). In May 1923, at the instigation of Katharine Reynolds Johnston, Keen relocated his family to Winston-Salem and established an office in the Wachovia Bank Building to oversee his multiple projects, which included the magnificent, state-of-the-art Richard J. Reynolds High School and Memorial Auditorium, which was funded by Katharine Johnson as a memorial to her late husband. Wallace and his family also came South. By 1924, Keen moved back to Philadelphia and enticed Wallace with a partnership to return with him. Wallace continued to travel back and forth to supervise Keen projects, and in 1928 he settled permanently in Winston-Salem, where he established an independent practice.

Charles Barton Keen died of a stroke in Bermuda in February 1931, after several years of illness during which Wallace managed on-site work and then finished his projects. The productive and popular architect left behind no personal or business records. His only documents are architectural plans in the hands of a few owners of Keen residences; the extensive published coverage of his early work in the northeast; and the extant buildings which are lived in and enjoyed from Philadelphia’s Main Line to North Carolina’s Tobacco Road.