The Manufacturers’ Record of April 18, 1918 noted that bids were being accepted for the 9-story American Exchange National Bank Building, which had been designed by Hughes. The tallest building in town at its completion, the classically detailed skyscraper at 100-102 N. Elm St. was one of several fine early 20th century skyscrapers that help define downtown Greensboro. It was opened in 1921, and Hughes moved his office there. Originally heavy Doric columns and an entablature defined the first two stories. Around 1940, the lower two floors were remodeled with aluminum storefronts. A renovation ca. 2012 restored much of the original character. 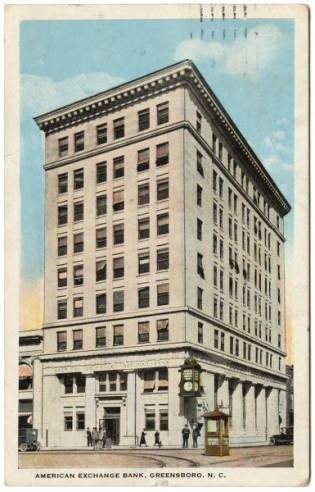