As stated in Tony P. Wrenn, Wilmington, North Carolina: An Architectural and Historical Portrait (1984), Brady received a building permit in 1905 to construct this house of brick and artificial stone, the latter of which was quite a novelty at the time. He may have resided there for a brief period, but in 1907 he sold it to H. L. Henderson. The Wilmington Dispatch of May 28, 1903 described patent stone as “a hollow concrete stone, which was recently introduced in Wilmington,” and was “cheaper than brick and as durable as stone.” There are a few other examples in Wilmington buildings, but this is one of the few intact, large dwellings made of it. The blocks are cast to resemble rough-hewn granite, complemented by cast window and door lintels and decorative frieze. It likely served as an advertisement of the material—and Brady’s skill in building with it. 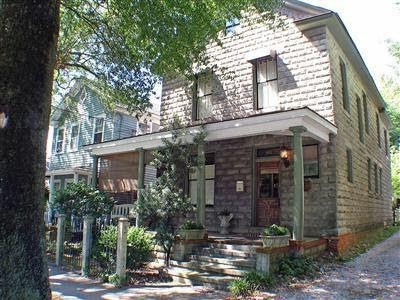