The August 3, 1895, edition of McBee’s publication, The Churchman, reported that the cornerstone of the chapel of St. Augustine’s school had been laid on Monday, July 15. “The designs are by Mr. Silas McBee of North Carolina and New York.” The chapel was to be of stone, part of it taken from the grounds of the school. Fundraising had begun. The News and Observer of February 27, 1896, reported that “The handsome new stone chapel at St. Augustine’s school is nearing completion.” Further details of the chapel’s construction were included in the January 22, 1898 Churchman, which noted that the building “was erected entirely by untrained colored masons” and built of granite quarried on the school grounds and from Greystone in Henderson North Carolina. The photograph shown here illustrates McBee’s design as initially built. In the early 20th century, the chapel was altered in harmonious fashion by the addition of the north transept (1904), removal of the tower (1917), and at about the latter date, construction of a gabled porch with a belfry tower—resulting in the present configuration of the chapel. Information courtesy of Mary Ruffin Hanbury. 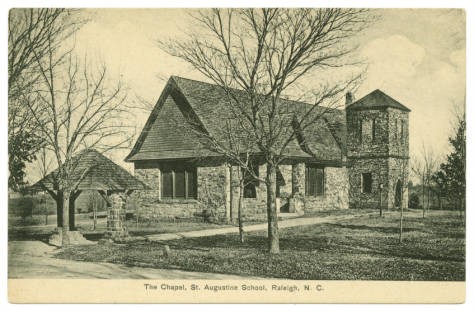