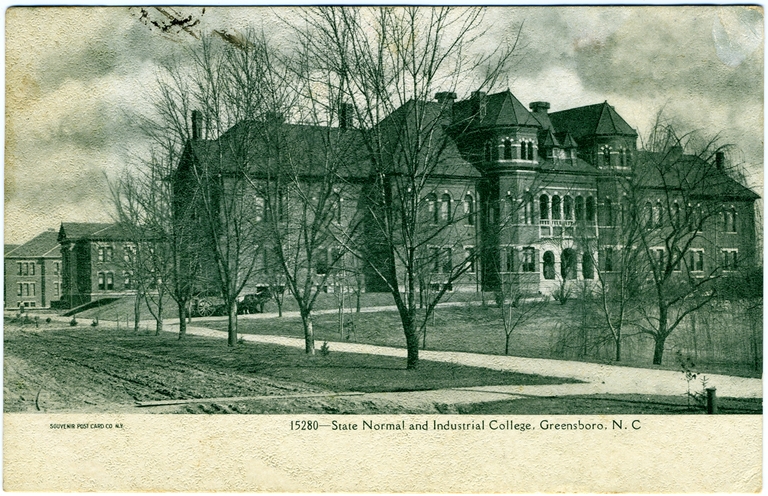 Orlo Epps (1864-1926) was one of Greensboro’s principal architects around the turn of the 20th century. Like many architects and builders of his era, his practice encompassed every popular style of the day and a multitude of building types from houses to colleges to mills. During the 1890s in Greensboro, Epps was associated with architect C. M. Hackett, in the firm of Epps and Hackett, then worked on his own for several years before returning to New York.

Orlo Epps was born in Elkhart, Indiana (where both Orlo and Epps were common names). He moved to Oneonta, New York at age 16, and attended Cornell University (1884-1888), where he studied architecture, and he practiced briefly with Oneonta builder Lyman H. Blend. About 1890 Epps moved to Greensboro, a small but growing city that in the 1880s and 1890s had few architects. He bought a lot there in 1890, where he built his own residence, and formed a brief partnership with C. M. Hackett, of whom relatively little is known. How and when Epps and Hackett joined forces is unknown, but by 1891 their firm gained the major commission for the Julius I. Foust Building (Main Building) of the newly established State Normal and Industrial School for White Girls (present University of North Carolina at Greensboro). Greensboro leaders had offered winning bids in land and funds for the school, which was North Carolina’s first state-funded college for women.

For the woman’s college, Epps and Hackett planned a massive, red brick edifice in Romanesque Revival style with prominent front towers and an arcaded, rough granite entrance. One of the state’s principal surviving examples of the imposing Romanesque Revival style “Main Buildings” erected for the colleges of the period, it remains the centerpiece of an extensive campus. When more room was needed, the firm also planned the large Brick Dormitory next door to the main building. In 1892 the Greensboro city directory showed Hackett residing in Epps’s home. During the 1890s Epps and Hackett also designed some commercial and fraternal buildings in downtown Greensboro, including a business block and a hotel for Basil J. Fisher, an entrepreneur who developed the Fisher Park suburb. Also in the 1890s, Epps served as professor of physics, mechanics, and applied mathematics at the new North Carolina Agricultural and Mechanical College for the Colored Race (now NCA&T), also in Greensboro. Whether he planned any buildings on the campus is unknown, and no buildings survive from that period. During his tenure in Greensboro, Epps engaged in several projects that were reported in the Manufacturers’ Record, about which little is known. Among these were the Knights of Pythias Building (MR Dec. 12, 1891) and the B. J. Fisher Business Block and B. J. Fisher Hotel (MR June 24, July 22, 1892).

Epps designed several residences in Queen Anne style, including his home in Greensboro. He planned the Tallulah A. Richardson House in nearby Reidsville, an elaborate residence and the town’s prime example of the Queen Anne mode; the contract was signed in August, 1890. (Similar houses in both Reidsville and Greensboro may also be Epps’s designs, but documentation is lacking.) When the partnership with Hackett ended is not known, but by May 15, 1902, Epps was listed on his own in the Manufacturers’ Record. About 1900 Epps had begun a practice in Washington, D.C., while maintaining Greensboro ties. He was listed in Greensboro city directories until 1903.

Epps made an especially important connection with the city’s Cone family. The Cone family—brothers Moses and Ceasar [sic]—had come to Greensboro in the early 1890s and established a textile manufacturing empire. It is possible that Epps and Hackett planned the Cones’ first mill, Proximity Mill(begun 1896 and named for its proximity to cotton producers), a brick complex with round-arched openings and mansard-roofed towers, but this has not been ascertained.

As their wealth grew, Moses Cone and his wife, Bertha, decided to create a mountain retreat. They assembled 3,600 acres in Watauga County where, influenced by Biltmore Estate, they developed an estate called Flat Top Manor (1899-1901) which included a landscaped setting and a working farm complete with bridle paths, a dairy farm, and livestock, with some thirty tenants and their families. At their mountain estate, the Cones welcomed visits from their large family, including Moses’s illustrious sisters, Etta and Claribel Cone of Baltimore, major art collectors and friends of Gertrude Stein, Matisse, and others in Paris arts circles. For Flat Top Manor, Epps designed one of the earliest and grandest Colonial Revival mansions in the state. A contrast to the generally rustic and picturesque mountain resort architecture, the 23-room frame house is symmetrical in form and features a long porch with Ionic columns, a pedimented entrance pavilion, and Federal Revival style detailing. The Cones, children of a German immigrant merchant, were among many New South industrialists who employed an architectural vocabulary that linked them with American and Southern traditions and emphasized the family’s identification with America. Epps’s work for the Cone family continued when he planned the 3-story, brick office building for their Cone Export Commission Company Office Building (1902) in downtown Greensboro.

In 1905 Epps moved back to Oneonta, New York, where he practiced architecture with Lyman Blend for several more years. He was active in civic affairs including the local socialist party and was an advocate of women’s suffrage. He and his wife Charlotte (Carrie) Mackley of Oneonta had two children, Helen and Max.