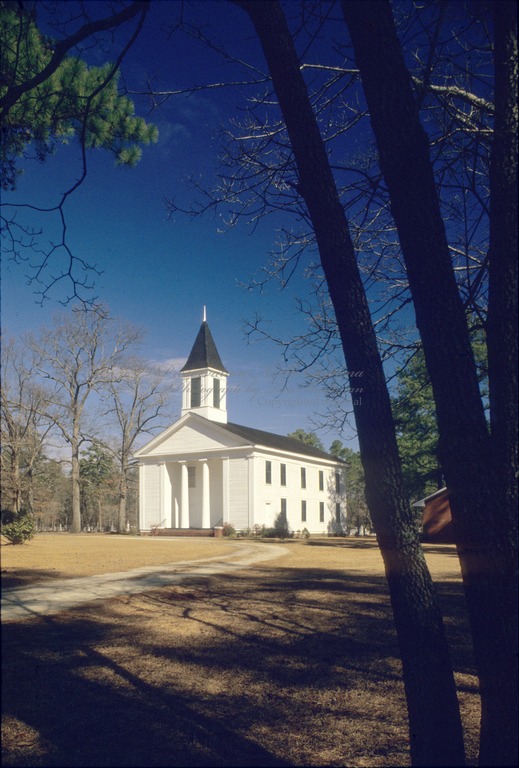 Gilbert P. Higley (September 3, 1823-July 5, 1896), a Connecticut-born carpenter, is described by local tradition as builder of the Greek Revival style Philadelphus Presbyterian Church (1860-1863) in Robeson County. Philadelphus is one of an important group of antebellum Greek Revival frame churches built for Highland Scots Presbyterian congregations in the upper Cape Fear region. It is one of the very few of these for which a builder has been identified. Higley may have drawn upon New England precedents as well as architectural pattern books in designing the church with its Doric columned portico set in antis beneath a pediment.

Gilbert P. Higley was the son of Pliny (Plinny) and Martha Higley of East Granby, Hartford, Connecticut. (Gilbert’s middle name was probably Pliny for his father; later generations used that name.) By 1850 he was in Robeson County, North Carolina, where he was listed as an unmarried carpenter from Connecticut (age 30) in the United States Census. In 1850 Higley married Ann Eliza Norment, and the couple had several children. By 1860 he had property valued at $800 in real estate and $200 in personal property, and headed a household that included Ann Eliza, three small children, and four apprentice carpenters, indicating that he was busy at his trade. It is likely that Higley built other churches in the area as well as houses and other buildings. Yet, though he lived a long life and continued his trade as a carpenter in Lumberton and Robeson County, no other buildings have been identified as his work. During the Civil War, Higley fought for the Confederacy in the 51st Regiment, North Carolina Infantry, from 1861 to 1865. In 1880, the 56-year-old carpenter was residing in Lumberton with his wife and four children, including a son, aged 16, also named Gilbert P. Higley. He was buried in Lumberton. His descendants continue to live in the community.