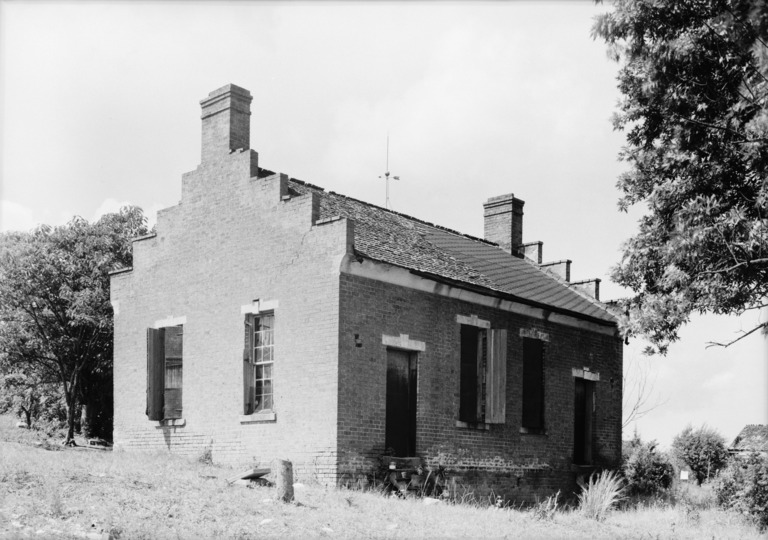 Abraham Spencer (before 1794-1849), sometimes referred to as “Captain” Spencer, was a respected antebellum bricklayer and plasterer in Oxford, Granville County, whose practice extended across several counties from present Durham County to Northampton and Halifax counties. Employing skilled slave masons and plasterers, from the 1810s through the 1830s and 1840s, he undertook many public and private projects. He and his workmen laid chimneys, built masonry foundations, and plastered walls for frame houses. They also constructed some of the relatively few urban brick buildings in the area at the time.

Spencer’s early life is not known. It is possible that he was a native of Virginia, just over the state line from Granville County; in 1816 Abraham Spencer wed Martha Bilbo in Mecklenburg County—probably the Martha B. Spencer cited in later years. Like other successful mechanics, Spencer owned real estate and slaves, and he increased his holdings over the years. In the 1810s and 1820s he owned from three to five slaves plus a small amount of land, and in the 1830s, he bought several town lots in Oxford, a tract of 214 acres outside the town, and a 13 3/4 acre plot on Grassy Creek where he established his brickyard. By 1840, he listed thirteen slaves in his household. He also took apprentices to the brickmason’s trade, including Samuel Richardson, aged 16, in 1825, and Moses Mays, aged 14, in 1835.

The earliest known documents concerning Spencer’s work appear in the papers of Orange County planter Duncan Cameron. In 1826 Cameron paid Spencer $39 for lathing and plastering a chapel—the small, frame plantation chapel called Salem Chapel on Cameron’s estate, Fairntosh, near Hillsborough. A few years later, in 1832, Spencer tried to get another (unidentified) job with Cameron. The house in question may have been Burnside, built for Duncan’s son Paul near Hillsborough, or the large house built for Duncan Cameron on Hillsborough Street in Raleigh, or another building entirely.

In a long appeal to Cameron, Spencer wrote,

I have been informed that you were about Commencing a Large Building I asked Mr. Smith to mention me to you as a Brick layer and plasterer and in reply to it you inquired after Mr. Turner. feeling a little hurt at being and thinking your objections were my prices (as I can think of no other for I execute my work with neatness and dispatch) I have taken the liberty to write you informing you my prices [.] Six or seven years ago I had for lathing and plastering 20 cents pr yard which might be called high now but I have been gradually falling ever since last summer I got down to 12 1/2 cents for lathing and plastering 8 cents for plastering along last summer I plastered a large house for John D. Amis about the size of the one I understand you are going to built it was lathed the plastering came to $130 and I am willing to come Lower as the times are hard I will doe plastering this summer at 11 1/2 cents I mean lathing and plastering and if the job can be made worth $200 I will do it at 10 cents. I will doe Brick work in proportion I hope you will not [take] me as insisting on being imployed by a man who has no disposion [sic] to doe so But I assure you it would be a Gratification to me to know what objection there is to me as it mite be of service to me in future life.

Abraham Spencer is best known for his role in three public buildings, all still standing: the clerk’s offices in Halifax and Northampton counties and the jail in Halifax. In April 1831, the county court of Northampton contracted with Spencer to build a “Fire proof Clerks & Registers Office” in Jackson. (Some years before, in 1827, the committee had developed a plan with the assistance of Warrenton carpenter Thomas Bragg, Sr.; how much this plan shaped the 1831 building Spencer constructed is not clear.) The Northampton County Clerk’s Office Spencer agreed to build was to measure 48 by 20 feet and contain three rooms. To make it as fireproof as possible, he was to construct the walls, floors, and foundations of brick, provide the windows with stone sills and zinc casings, and install a zinc roof. He was paid in installments geared to stages of completion: $500 on June 10, 1831; $450 on August 11, 1831; and the “last” payment of $450 on September 27, 1831.

The next spring, Spencer provided a plan and agreed to build a similar building, slightly smaller, for the Halifax County Clerk’s Office in Halifax. The building committee reported that they had conferred with several “gentlemen of distinction in the mechanical arts,” and had selected “Abraham Spencer, Esqr.” after receiving his cost estimate and a floor plan for a building 32 by 24 feet. (His plan, sent from Oxford, survives in Halifax County records at the State Archives.)

Both clerks’ offices display similar and distinctive features unusual if not unique in the region, possibly reflecting Spencer’s (or Bragg’s) designs. The 1-story brick office buildings have simply finished openings set into walls of brick laid in Flemish bond. Most striking are the gable ends that rise in a series of bold steps high above the gable roof and are adorned with pyramidal pinnacles. Plastered lunettes are centered in the gables, and plastered coved cornices underline the eaves. Whether Spencer erected any other buildings of this type is unknown. One possibility is the 2-story Brick Store on Main Street in Warrenton (1830s), which displays walls in Flemish bond, a plastered lunette in the stepped gable end, and a plastered cornice under the eaves.

Spencer’s work on the Halifax clerk’s office must have pleased local officials, for a few years later, after the county court authorized construction of a new Halifax County Jail in 1837, he took the contract. He completed the simply finished, 2-story, brick building of 1:3 brick bond in 1838 at a cost of $4,250.

In common with other builders of his day, Spencer sometimes deployed his workmen to various building sites as far from Oxford as Louisburg, Jackson, and Orange County near Hillsborough. For his house near Louisburg, planter Nicholas Massenburg paid Spencer $111.75 for plastering, and Spencer sent “two hands” to work on the Massenburg Plantation House project in October and November of 1838. “Captain Spencer’s Albert” accomplished much of the work without supervision. Massenburg, who kept a record of the workmen, noted on October 5, 1838, “2 Plasterers Began to lathe today Capt. Spencers hands from Oxford.” On November 21, 1838, “Plasterers finish the house late in the evening which was done by Capt. Spencers Albert of Oxford.”

On another occasion, when Spencer’s crew was already working on an unidentified project in Northampton County, local planter H. K. Burgwyn “bargained” with “Ruben, Spencer’s foreman,” to finish the brick and plaster work on his own house then under construction. The two signed a contract on March 21, 1841, for Ruben and his hands to make 30,000 brick, underpin foundations, put up chimneys, and do lathing, plastering, and ornamental work. Burgwyn estimated Ruben to be “a slippery fellow,” and insisted on a witnessed contract. And indeed he soon received a letter from Spencer himself stating that he would not send the men back to Burgwyn’s job—suggesting that Ruben might have exceeded his authority in contracting for the work.

Spencer died intestate in October, 1849. In an unusual observation about mortality rates, a note in Spencer’s estates papers said of his widow Martha B. Spencer, that she was 55 years of age and “having passed the critical periods of her life. & having a good constitution, I think the probabilities are in favour of her living fifteen years.” The settlement of the estate involved the disposition of the elder Spencer’s slaves, his brickyard lot, the lots on which he resided, and other property. His estate records show that certain of his slaves were hired out to make money for estate, including earnings of $85 in the year 1850 by his slave Pleasant Spencer, evidently a skilled artisan. Among the slaves listed in the division of Abraham Spencer’s estate were Pleasant, Patrick, Amanda, Caroline and children, Reuben (perhaps the Ruben who had made a contract with Burgwyn earlier?), Charles, Henry, and Sarah. Pleasant Spencer was hired from the estate for a time to A. F. Spencer for $85 a year, perhaps to enable A. F. Spencer to continue his father’s trade.