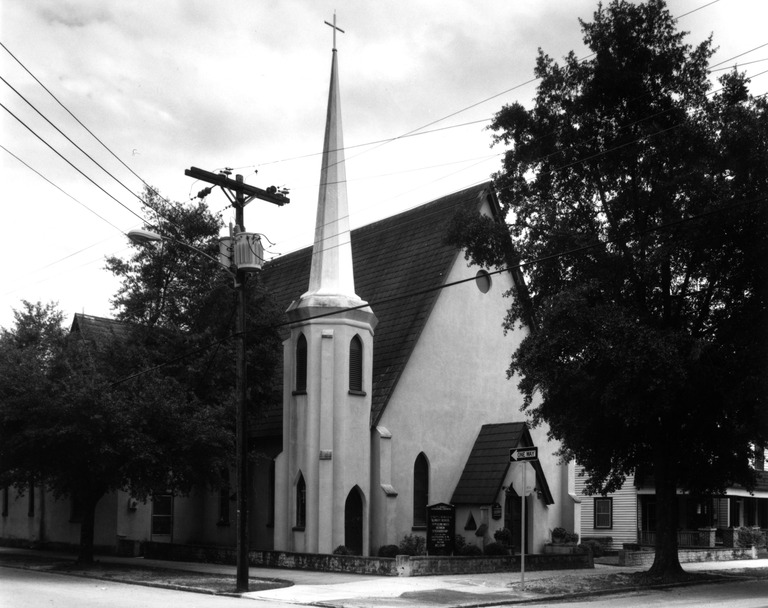 Emerson and Fehmer (fl. 1870s-1880s) was an architectural firm noted for its work in the northeastern states. The partners consisted of William Ralph Emerson (1833-1917) and Carl Fehmer (1838-1916), architects who also had notable careers on their own. Their work concentrated in the Northeast, with few known works in the South. It was probably through national Episcopal connections or through some unidentified northern donor that the prestigious firm supplied the Gothic Revival design for Wilmington’s St. Mark’s Episcopal Church (1871-1875)—the first church built in the diocese for a black Episcopal parish.

As explained by Tony P. Wrenn in his account of St. Mark’s in Wilmington, North Carolina: An Architectural and Historical Portrait, the congregation was organized in 1858 as a mission of St. Paul’s Episcopal Church and included both black and white parishioners. By 1866, St. Mark’s had developed into a black mission, and it received its first black minister in 1869. The parish was organized in 1872.

In contrast to most other Protestant denominations, the national Episcopal Church (which had split briefly during the Civil War) reunified quickly after the war and encompassed both black and white parishes. In many cases, formerly integrated parishes supported the establishment of separate black missions and parishes. Some black congregations were assisted by northern benefactors and some of their churches were designed by noted northern architects.

As Wrenn’s account describes, in September 1875 the Spirit of Missions, the Episcopal magazine, reported that North Carolina Bishop Thomas Atkinson had consecrated St. Mark’s Church on June 18, 1875. It was, according to the report, “the first Church consecrated in the Diocese for colored people.” The brick church measured 61 by 35 feet with a ridgeline of 41 feet and 20 feet to the eaves. “It is of brick and church-like in style. The designs were furnished by Emerson and Fehmer, of Boston, Mass. The roof is sharp, the chancel recessed, the windows pointed Gothic.” The church not only epitomized the picturesqueness of the Gothic Revival favored by the denomination but featured the recessed chancel and other elements identified with high church practices that were rare in the predominantly “low church” North Carolina diocese. The cornerstone had been laid in 1871, and work proceeded as funds permitted. After a few more years, the intended corner tower was complete. Construction was supported by donations from Wilmington and also from Boston, New York, and Washington DC. St. Mark’s is believed to be the oldest church building in the state built by and for a black Episcopal congregation.

Williams Ralph Emerson and Carl Fehmer were leading Boston architects whose partnership lasted from the 1870s into the 1880s. They were founders of the Boston Society of Architects in 1870 and established notable reputations for their work in many styles, including the Colonial Revival style, the Shingle Style, and others modes of the day. Their design for the small, sophisticated Gothic Revival church in Wilmington is a rare example of their work in the South.

It is probable that the church was constructed by Alfred Howe (see Howe Family), a longtime member of the congregation and one of the city’s leading black builders both before and after the Civil War. He was involved, as Wrenn points out, in the purchase of the lot and served as Senior Warden of the congregation. His son, Valentine Howe, also a builder and a vestryman of St. Mark’s, is believed to have carried out renovations to the church in 1897.