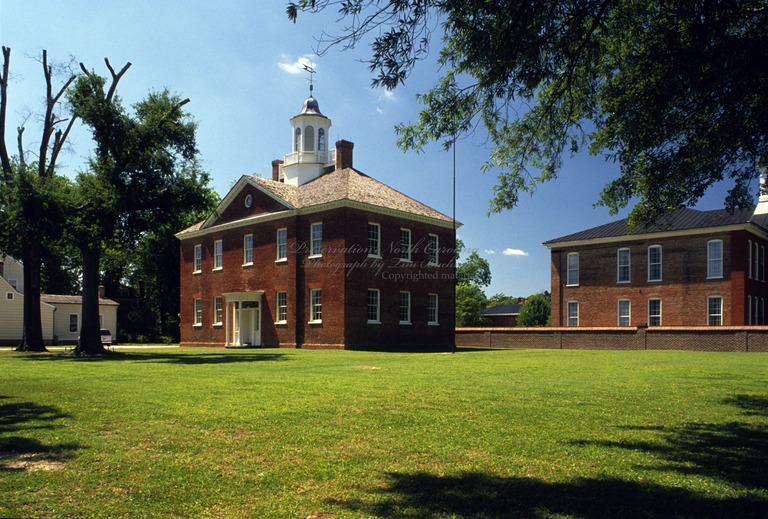 John M. Oliver (ca. 1769-1840), was a carpenter and house joiner active in New Bern during the city’s Federal period construction boom, from the 1790s into the 1820s. According to his obituary, he was a native of New Jersey who lived for many years in New Bern and then moved to South Carolina, where he died near Greenville, South Carolina in 1840, in his 71st year, a “quiet, orderly citizen.” The date of his arrival in New Bern is not known, but he was working at his trade by 1799 and by 1803 was a member of New Bern’s St. John’s Masonic Lodge. He is probably the John M. Oliver who married Sallie Clark in Craven County in 1798.

John M. Oliver was involved in constructing the New Bern Academy (1806-1809), a brick edifice in Palladian format and Federal style. In a letter dated September 21, 1809, Hardy Sanders wrote from New Bern that J. M. Oliver had fallen from a “stage” (or scaffolding) at the “Academe” and had sustained a broken right knee, injured wrist, and lacerated face. According to New Bern Baptist memoirist John D. Whitford, John Oliver also worked on building the Baptist Meeting House. Whitford also recalled that New Bern joiner and chairmaker Robert Hay had resided for a time with John Oliver at the Olivers’ residence and was associated with him in house building.

Oliver, like many leading New Bern artisans, owned slave workmen. In an advertisement in the New Bern Carolina Centinel of June 2, 1821, Oliver offered for sale three Negro house carpenters, “equal perhaps to any in Newbern”; their names are not known. Also like other New Bern artisans, Oliver collaborated with fellow artisans in various local projects. He worked along with New Bern brickmasons Joshua Mitchell and Donum Montford to build the Craven County Jail in 1821-1824. He doubtless worked on other New Bern projects during the city’s Federal period heyday of construction, but none of these have been identified as yet. According to his obituary, he moved to South Carolina fifteen to eighteen years before his death in 1840, dating the move to the period ca. 1822-1825.