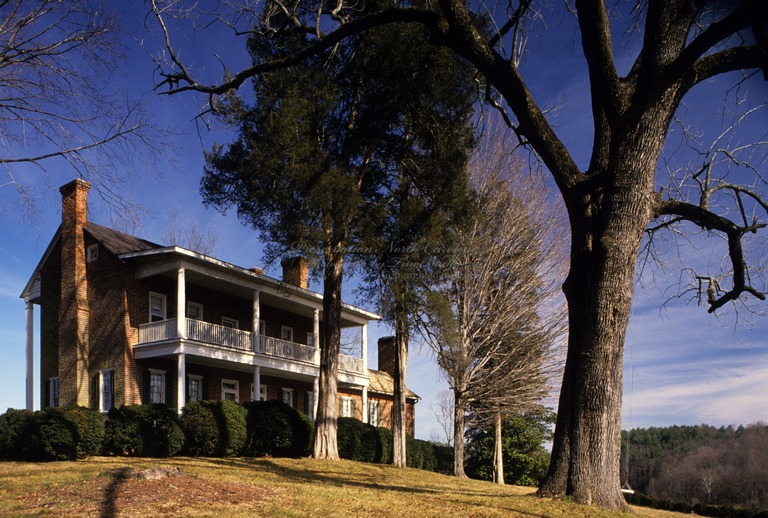 Jonas Bost (December 8, 1794-December 30, 1870) was a carpenter of German lineage in the western Piedmont who lived in Catawba County and executed projects there and in Burke and Mecklenburg Counties. Like many rural artisans, he combined his trade with farming and took a prominent role in local civic affairs.

Jonas Bost was the eldest of eleven children of Elias and Mary Ikerd Bost. Through his father, he was a grandson of William and Catherine Bost and a great-grandson of Johannes Wilhelm Bost (Bast), a German-born pioneer who came to the region from Pennsylvania in 1754 and obtained land in present Catawba County in 1762. Here a German community flourished, including the large Bost family. Jonas’s father, Elias, was a house carpenter and a substantial farmer, from whom Jonas probably learned his trade. In 1818 Jonas married Rosannah Mehaffey, and the couple had seven children.

Local accounts report that Elias Bost built his own house, the Bost-Burris House near Newton, about 1810 and finished it with Federal style woodwork inspired by the popular pattern book, The Young Carpenter’s Assistant, by Owen Biddle. It might also have been was built or finished somewhat later by Jonas Bost. It is also possible that Jonas or Elias Bost worked on St. Paul’s Lutheran and Reformed Church (ca. 1818), which was built by local carpenter Henry Cline of logs from an earlier church, and which features Federal style motifs in its finish woodwork, especially the sounding board suspended above the pulpit.

By 1819, Jonas Bost had mastered his trade, for in that year he took Joseph Burns, aged about 14, to “learn the mystery of a Joiner.” Although Jonas Bost practiced his trade for many years and across a wide geographical region, few examples of his work have been identified.

The woodwork at Bellevue, an elaborate brick plantation house in Burke County, is the only documented example of Jonas Bost’s Federal period handiwork known to survive, and it displays the high quality of his craftsmanship. Built for a leading planter, James Erwin, Bellevue features a local rendition of the Federal style in the main mantel, which features carved sunbursts and engaged colonnettes, and refined detailing on the cornices and paneled wainscoting. Bost’s bill for $500.47 listed each element by traditional “measure” or by the item: flooring at $2.50 per square, wash board (baseboard) at $0.03 cents per foot, a “seller door” at $1.00, a chimney piece (mantel) at $15, another at $7.50, and a “peaza” (piazza) for $20. Comparison of Bellevue’s details with those of other regional buildings may suggest other work by Bost.

Bellevue is part of an important group of stylistically related plantation houses in the Catawba Valley, most of them of brick and following variations on a three-room plan, and featuring high quality Federal style woodwork. It is one of the few for whom an artisan has been identified. Whether Bost accomplished the finish carpentry on other houses in the group remains unknown. Among the related houses in Burke County are Quaker Meadows, Cedar Grove (dated 1825), Pleasant Valley.

In Charlotte in the 1830s, Bost contracted to construct outbuildings and a fence for the superintendent’s quarters at the United States Mint’s branch in that city. The high cost, $5,500, prompted questions that resulted in a detailed description of his work, which included a brick kitchen-smokehouse-bathhouse, a stable, an icehouse, and a frame summerhouse and wood house.

After Catawba County was established in 1842, Jonas Bost served as chairman of the county court and handled the purchase of land for the new county seat of Newton. He built the first stocks, pillory, and whipping post near the courthouse. He also took an active role in promoting plank roads and railroads in the county.

Bost opened and operated a hotel (which he may have built) in Newton. About 1850, he built in Newton for his family the Bost House, a modestly finished Greek Revival style frame dwelling. He appeared in the U.S. census of 1850 as a house carpenter, and in 1860 he identified himself as a hotel keeper and farmer. Bost owned two plantations and as many as fourteen slaves. One of his slaves, W. L. Bost, later moved to Asheville and recalled his early life in a narrative recorded in the early 20th century. After the war, Jonas Bost returned to his trade as carpenter—and was thus identified in the census of 1870—but none of his postwar projects has been identified. Bost and his wife and other family members are buried in East View Cemetery in Newton.