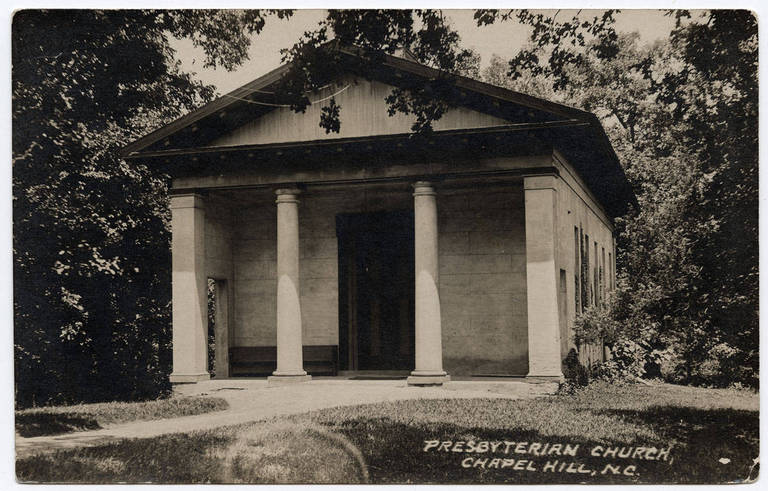 Harry (fl. 1840s) was an enslaved carpenter who belonged to Judge William H. Battle and his wife Lucy Martin Battle of Chapel Hill. Like some other slave artisans, he worked on a variety of projects with relative autonomy, building both for his owners and for those to whom they hired him. Letters between Lucy and William Battle illuminate the details and relationships involved.

Harry’s date and place of birth are not known. Before coming to Chapel Hill, the Battles had resided in Raleigh and in Franklin County, and they had inherited slaves from their parents. When they moved to Chapel Hill in 1843, the Battles bought a small house from Kendall B. Waitt, a white Chapel Hill carpenter. They engaged another carpenter, a Mr. Jenkins, to repair and enlarge the house with Harry’s help. It is not known whether Harry was already a skilled carpenter or whether he gained his training from Jenkins while working on the William H. Battle House. The house was completed by August, 1844, and from then through the following September, Harry was building and repairing outbuildings for the family complex: Judge Battle’s office, a smokehouse, a well house, corncribs and sheds, stables, several slave quarters, and a fence and gate enclosing the property.

Because Judge Battle was often out of town on court duty, he left Harry with instructions and arranged for the payments for building materials. Battle wrote to his wife in March 1845: “I was glad to learn from you that Harry was getting on pretty well with the work and that the other servants had given you no cause for complaint. I expect Harry will hardly finish the work I laid off for him time enough for you to be much troubled with hiring him out. Should I be wrong in this supposition however, you may dispose of him as you may think proper.”

Harry then visited the various local sawmills to select flooring, plank, shingles, and other building materials as he needed them. By September, 1845, he had nearly completed the Battle compound. On September 27, wrote Lucy, Harry was “finishing his own house—has put a closet under the stair steps.” He evidently did all the carpentry work, while other men accomplished the masonry. Lucy Battle’s letters to her husband indicate that Harry performed his work unsupervised; intervals of as much as three weeks passed before she inspected his progress.

In addition to having Harry work on their own buildings, the Battles sometimes hired him out to others in the community, often relying on him to arrange his own employment. In March, 1845, David L. Swain, the president of the University of North Carolina in Chapel Hill, hired Harry to build a fence around the university’s Steward’s Hall. In September, 1845, Lucy reported, “Harry is now nearly out of a job as there is no timber to be had—he went out to the Merritts’ this morning to see about it. He says Mr. Green speaks of hiring him next week.” This was probably William Mercer Green, a university professor and chaplain who operated a brickyard. Green led construction of the Episcopal church, the Chapel of the Cross, in 1844-1848 (see Thomas U. Walter), and he may have wanted to hire Harry for the project. The Battles were members of the congregation.

In October, President Swaim again employed Harry to work on a large ice house that several local residents were building jointly. On October 11, 1845, Lucy wrote to her husband that Mr. Jenkins (the carpenter who had built their own house) had called upon her “to hire Harry to help him build Mrs. Scott’s House—I told him he could have him. . . . he does not seem to like to give $15 pr month unless I bord [sic] him which I don’t like to do as I am going on the last side [of meat].” (Board meant to provide the workman with his food.) Harry entered into the discussion himself: “Harry says he has always received $15 and the person who hires him boards him—he wishes to know what you say.” A week later, Lucy reported, “Harry has gone to work for Mr. Jenkins. I sent him word that he must board him or pay me more than $15 a month so he concluded to do so.”

Harry’s name does not appear in Lucy Battle’s correspondence again until March 11, 1848, when she wrote to her husband, “I came near setting Harry to making an arbor for vines from each corner of the house to the paling as he said it would take only three dollars.” A few weeks later, she decided to have the arbor built when Harry’s schedule permitted: “Harry says he can do it, as soon as I get the timber—he is now working on the Presbyterian Church but says he can stop long enough to do my job. I expect that church will be finished now before ours.” The Chapel Hill Presbyterian Church, a stuccoed masonry building, was designed by New York architect Alexander Jackson Davis in Tuscan style and built by Raleigh contractor Dabney Cosby. Cosby may have hired Harry for the project, or the congregation may have employed Harry and perhaps another carpenter separately. By 1850, Harry was working for builder Kendall B. Waitt, for Lucy wrote to her husband on April 13, “I went to Sis. Catherine’s last night—she sends her love and says that her porch is just as it was—except that Harry came and told her that Mr. Waitt intended to send him there to finish it very shortly.”

The last mention of Harry in Mrs. Battle’s correspondence appears on April 24, 1851: “Sam Morphis has had the house that Harry lived in plastered and they will move in I suppose as soon as it is dry enough as Lizzy, I understand is very anxious to go in there.” (Sam Morphis was a mulatto slave who was well known in Chapel Hill; he hired his own time, driving a “hack”. According to William H. Battle’s son, Kemp P. Battle, after Sam Morphis married Lizzy, a slave of the Battle family, he became closely associated with the family. Morphis’s owner sought to free him in 1856, with the support of many university students.) Lucy Battle’s letter does not indicate why Harry had vacated the house he had built for himself—whether he had died, been sold, or simply moved to new quarters.