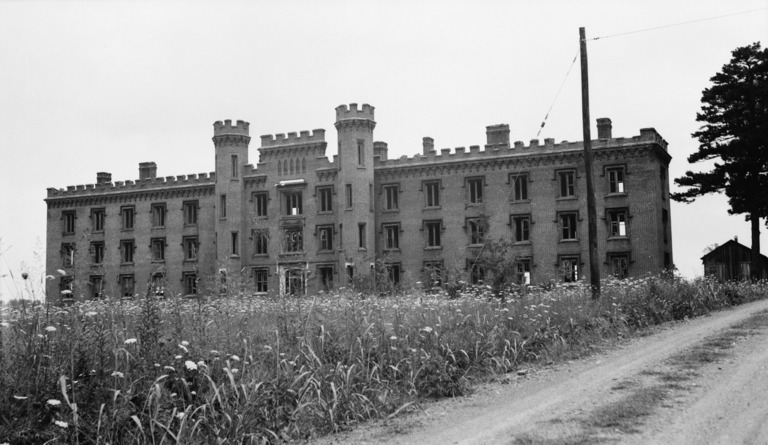 John A. Kay (fl. 1850s) was a Columbia, South Carolina, architect who provided designs for the large, castellated brick buildings of the Hillsborough Military Academy, which was built in 1859-1860. He is not known to have had any other commissions in North Carolina.

Identified as a native of Englandborn in about 1830, he was in South Carolina by the mid-1850s, and worked extensively on the South Carolina State House in Columbia, where he was identified as the “assistant architect.” In 1859 he was noted in the city directory in Columbia as an architect residing at the corner of Lady and Bull streets, and in the 1860 U.S. census was listed as an architect, aged 30, a native of England, in Columbia, with his wife, Mary, a native of Ireland. He was the owner of real estate and four slaves. Following his military service for the Confederacy as an engineer, as noted by John Bryan in his history of the South Carolina State House, Kay stayed in Columbia for a time working on completion of the war-damaged State House, but by 1869 he had moved to St. Charles, Missouri. He is surely the John A. Kay, architect, listed in St. Charles, Missouri, in 1870 with his wife, Mary, but there are discrepancies: the 1870 census said he was only 31 and a native of Georgia, and his wife was only 19; since the couple was living along with several others in a household headed by Joseph Fielding, a civil engineer, possibly the report to the census taker was erroneous. When and where Kay died is unknown.

Kay probably gained the commission for the Hillsborough Military Academy through Charles C. Tew, the South Carolina-born head and founder of the academy, who was a graduate of the Citadel in Charleston, South Carolina. Tew probably selected the military style for the Hillsborough facility after his alma mater’s imposing castellated Barracks building. Leaders of military academies of the day frequently selected castle-like styles with their fortified appearance as suitable designs for their institutions, as exemplified by the Citadel, the Virginia Military Academy, the North Carolina Military Academy (NLS) in Charlotte, and many others. The castellated style was often associated with the Gothic Revival mode.

Kay planned a large, 3-story edifice more than 200 feet long for the Hillsborough Military Academy Main Building, and used a similar mode for the smaller, 2-story Commandant’s House. As Mills B. Lane has noted, the Commandant’s House resembles a plate in Samuel Sloan’s Model Architect (1852), with its central and corner projections. Leading local brick builder John Berry and Henry Richards, Sr. constructed the buildings. Colonel Tew enlisted promptly and was killed early in the Civil War, but the school continued to train young officers for the Confederacy. Although the main building was destroyed in 1938 after serving a variety of purposes, the Commandant’s House has served as a private residence for many years.