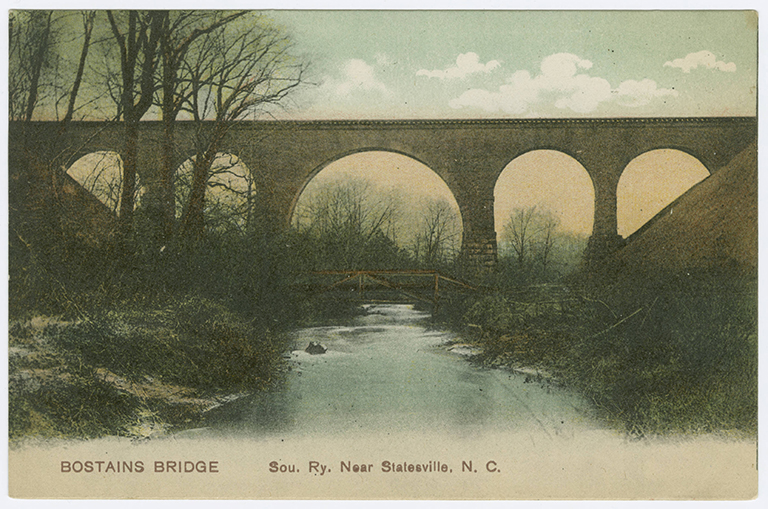 Robert Hendry (ca. 1829-May 14, 1869), one of several stonemasons of Scots background who came into the western Piedmont of North Carolina in the antebellum period, was employed in constructing masonry bridges for the Western North Carolina Rail Road (WNCRR). His only documented work is the magnificent Third Creek Bridge, built in 1857 from a design by architect William Raeder. Also known as “Bostian’s Bridge,” it is often cited as the finest antebellum railroad bridge standing in North Carolina.

Hendry’s early life and training are not established, but he was evidently in Salisbury by the early 1850s, when the Salisbury Carolina Watchman of November 18, 1852 listed his name among the individuals for whom the local post office was holding mail. (The previous year, the Raleigh newspaper had included him in a similar list for that city’s post office.) A large granite obelisk in Salisbury’s Old Lutheran Cemetery marks the graves of James Hendry (d. 1854) and his wife, Janet or Jennet (d. 1852), believed to be Robert’s parents. Robert Hendry’s known career as a mason for the WCNRR occurred in 1857-1858: from July 1, 1857 to June 30, 1858, he was paid a total of $6,612.64 for masonry work. Such a large amount suggests that he was superintending workers in his employ. He was paid an additional $98.40 in September 1858.

The only specific project documented to Hendry is the Third Creek Viaduct, which was included in a list of completed works between Salisbury and Statesville by James C. Turner, chief engineer of the WNCRR, in his August, 1857, to the president and directors of the railroad company: “5th. The second crossing of Third Creek is a Viaduct 250 feet in length founded on Rock, and consists of five semicircular Arches, four of 34 feet span, and one of 60 feet span, 60 feet from surface of water to grade, Granite Abutments and Piers, with Brick arches.” A year later, an article in the Salisbury Carolina Watchman of October 12, 1858, praised it as “The most extraordinary bridge structure in the State, and we think the most graceful and beautiful.” Although Raeder was credited with its design, Hendry was likely responsible for the high quality of its execution.

The Raleigh Register of October 20, 1858, republished the Watchman’s account, citing Raeder’s plans and specifications and Anderson Ellis “of Davidson county” as the contractor. Ellis “employed Mr. Robert Hendry to do the work, a gentleman of established reputation as a stone and brick mason.” The newspaper asserted, “Persons visiting Statesville should not fail to see this piece of work. . . . A train has never yet crossed it, and judging from the amount of grading to be done . . . several months must elapse before its strength can be tested in this practical way. It will be high riding—a little too high for nervous people.”

Whether Hendry constructed any other masonry structures in the area is not yet documented; in an article in the Salisbury Post of April 25, 1971, local historian James Shober Brawley attributed to Hendry’s handiwork the granite wall enclosing the English Cemetery on North Church Street in Salisbury.

On February 29, 1860, Robert Hendry married Mary Jane Johnston (1841-1870), daughter of John Sloan Johnston, a member of a prominent family from the Third Creek area then living in Salisbury. Robert enlisted in Company E, Fifth Regiment, North Carolina State Troops on May 18, 1861 and was appointed first lieutenant. He continued to be listed in newspaper accounts as part of the regiment through most of 1862. Robert Hendry died on May 14, 1869 and is thought to have been buried in the Old Lutheran Cemetery, though there is no known marker for him.