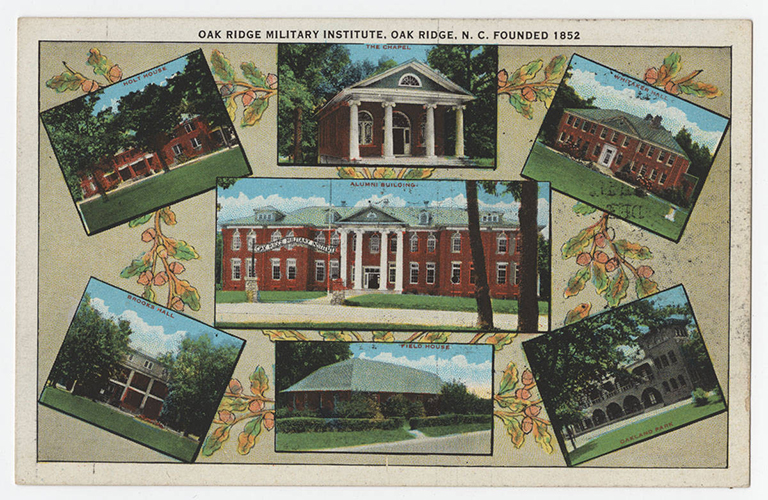 G. Will (George Williamson) Armfield (1849-1927) was a Greensboro architect and contractor in the early 20th century, who had spent his younger years as a merchant before embarking on a new career in construction about 1900. Although there are numerous contemporary references to his building projects, especially residences, only a few of his works are identified, with the best known the Oak Ridge Military Academy Alumni Hall at the Oak Ridge Institute in Guilford County.

Armfield was born near Jamestown, in Guilford County on January 23, 1849 to Joseph S. and Nellie Iddings Armfield. The Armfield family had been residents of western Guilford County for many years. According to The Gate City, Greensboro (1910), Will was educated at the Flint Hill Academy, Jamestown, and “took a course in Civil Engineering and Architecture under Dr. Brack Craven.”

Will married Esther (Ester) Wakefield, a native of Canada, in 1875, with whom he would have at least five children: Joe, Myrtle (Minnie), Clay, Roy, and Hugh. In that same year, Armfield moved to Greensboro and engaged in the dry goods business, first as a salesman and then as a partner with S. S. Brown in the firm of Brown and Armfield. After they dissolved the partnership in 1881 or 1883 (accounts vary), Armfield opened his own dry goods business in a new building on South Elm Street and gained a strong reputation for his good bargain prices. The store is pictured in Gayle Fripp’s Greensboro (1997) at 236-238 South Elm Street. Fripp notes that an 1887 business directory said he carried a full line of dry goods, carpets, clothing, shoes, hats, and general furnishing goods of all kinds. As described in the Armfield Family Newsletter (Vol. 9, No. 2, June 2014), G. Will was a “staunch Republican,” which in the politically heated 1880s and 1890s led many (Democratic) citizens of Greensboro to boycott his store. Indeed, on December 7, 1888, Armfield published in the Greensboro Patriot a “card” objecting to certain persons seeking to “injure my business as a merchant of Greensboro, on account of the interest I took in the late election.” He noted that he was a Republican but “my politics have never been mixed up with my business,” and most of his employees were Democrats. The newspaper’s editor condemned the “very foolish” boycott: “We abhor Mr. Armfield’s politics, but we respect boldness and independence.” He continued his mercantile business for a few more years but sold it in 1893. For the next several years, he held various positions including as a bookkeeper for a furniture company.

In the late 1890s or early in the 1900s (accounts vary), Armfield turned to full-time architecture and building. How he learned this business is not clear. Operating out of his residence at 350 South Ashe Street, he was listed in the 1905 Greensboro city directory listed him as a contractor, but the directories of 1907 and later listed him as an architect. The United States Census of 1910 recorded G. Will Armfield as a 60-year-old architect, heading a household that included his wife Ester, 52, of Canada. The Gate City of 1910 said Armfield had “planned and erected over one hundred houses in Greensboro.”

When North Carolina passed an architectural practice act and began the formal registration of architects, G. Will Armfield of Greensboro was granted certificate #1 on May 15, 1915. He was one of a large number of men who were certified based on having already been in practice prior to 1915. The Armfield Family Newsletter stated that his son Joseph joined him in architectural practice, and G. Will Armfield continued in that line of work as late as 1924.

Armfield gained a number of substantial commissions, of which the best known is the large, classically inspired Alumni Hall (1914) at the Oak Ridge Institute in the village of Oak Ridge in Guilford County. He also undertook commercial and residential buildings in Greensboro. One of the few that have been identified as standing is the large, Southern Colonial-style residence Harden Thomas Martin House of 1909, built on Mendenhall Street in Greensboro as a retirement residence for Reidsville merchant Martin. The Manufacturers’ Record of July 23, 1908 noted that Armfield was building the house for Martin. Armfield’s blueprints for the house remained with the house and are now in the Special Collections Research Center at NCSU Libraries.

Among many other published references, the Charlotte News of October 21, 1905, noted that Mr. E. J. Justice had awarded a contract to Armfield to build a “handsome and modern” 12-room house in the Fisher Park suburb, just west of North Elm Street. The Manufacturers’ Record printed several citations of Armfield’s projects in Greensboro, among them three apartment houses (February 1, 1906), including one for S. L. Gilmore and Nina Brown; a store for H. T. Ham (May 28, 1908); two residences for Mrs. J. B. Welborn, one for Mrs. Bernie Gilmer, and another for Ernest Clapp (April 1, 1909); a residence for Mrs. Nelson (March 3, 1910); and three more residences—for I. H. Denny, Mrs. F. C. Welborn, and J. H. May (March 17, 1910). Another publication, Southern Hardware, noted in its issue of May 15, 1913, “Architect G. Will Armfield will have plans complete about May 15 for a two-story frame residence to be erected by Dr. J. W. Taylor at a cost of $5,000,” and he was also preparing plans for a $3,000 bungalow for Mrs. R. Kerner, both to be in Greensboro. Most of these projects await further identification.

Armfield was active in civic life, including service as a board member of the Guilford Battleground Company and in bringing the North Carolina Industrial and Normal College (present University of North Carolina Greensboro) to his home city. He also served on the Guilford County Board of Commissioners and was active in West Market Street Methodist Episcopal Church. At the time of his death, Armfield was residing at his longtime home at 350 South Ashe Street in Greensboro. He was buried in Greensboro’s Green Hill Cemetery.

There is a collection of G. Will Armfield Family Papers (MSS. COLL #102) at the Greensboro Historical Museum, which may shed further light on Armfield’s life and practice; there is no posted finding guide to that collection. See http://archives.greensborohistory.org/manuscript-collections.