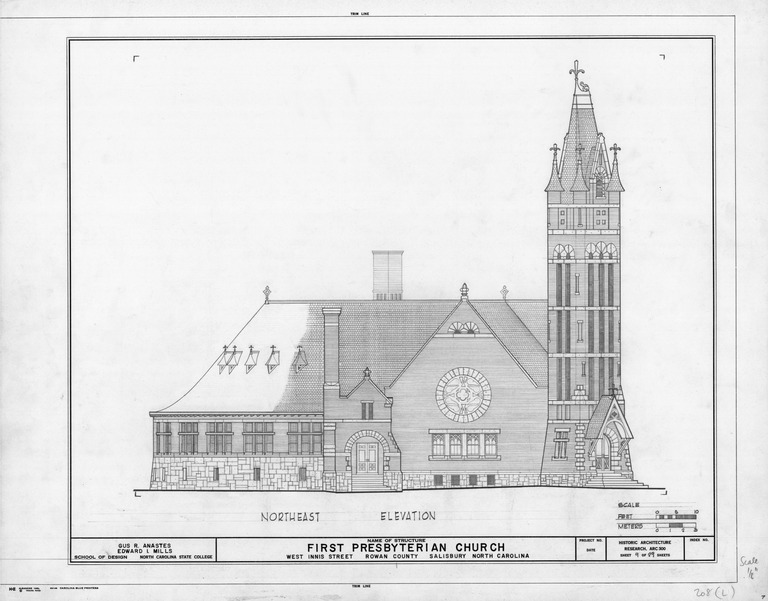 Charles Webber Bolton (1855-1942), a leading church architect in Philadelphia in the late 19th and early 20th centuries, planned scores of churches during his long career, including one of North Carolina’s most imposing Romanesque Revival churches, First Presbyterian Church (1891-1892) in Salisbury.

Born in Zelienople, Pennsylvania, he studied at Lafayette College in Easton, Pennsylvania, and went to work as an architect in 1881 in Pocahontas, Virginia. He soon moved to Philadelphia where he established a long-lasting practice. Beginning in the 1880s, his Presbyterian church designs were featured in the denomination’s publications. He also planned buildings for Methodist, Lutheran, and Baptist congregations, as well as some educational buildings. After the turn of the 20th century he took as partner his son, Charles L. Bolton. His obituary credited him with designing more than 500 churches.

For Salisbury’s venerable First Presbyterian Church congregation (organized in 1821), Bolton designed a large, brick edifice, trimmed in stone and featuring a spacious auditorium plan. Its dramatic form and tall tower made it a landmark in the small community and distinguished it among the late 19th century churches in the state. The congregation probably selected Bolton because of his national prominence as an architect for the denomination; it was not unusual for North Carolina clients in large and small towns to commission work from distant urban architects who specialized in certain building types, such as Albert L. West for Methodist churches, and Richard Upjohn and Hobart Upjohn for Episcopal ones. When the great church was razed in 1971 to make way for a new facility, the bell tower was preserved and still stands. This is Bolton’s only known work in North Carolina.