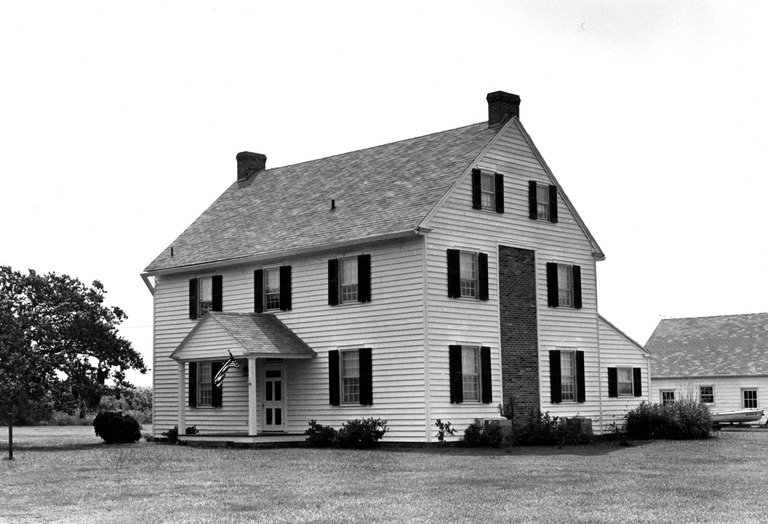 Caleb F. (Foreman) Brooks (1797-1885), a house carpenter, was born in Gull Rock on the south side of Lake Mattamuskeet in rural Hyde County, North Carolina, and spent his entire life in that locale. He is the earliest known carpenter identified with the construction of specific houses in the county. Strong local and family tradition attributes three notable antebellum houses to him. It appears that his period of greatest activity as a carpenter was before 1850.

The scant documentation of Brooks’s life comes from gravestones, census records, and a few local records. He was practicing his trade by 1830, when he took Abraham B. Jones, aged 17, to the house carpenter’s trade, and in 1834 he apprenticed William N. Satchwell, 15, to the same trade. In 1838, he was one of several legatees of his father, William Brooks, who left his property in land, slaves, and personal possessions to his children and grandchildren. Caleb was to receive William’s house and plantation and a slave named Jack. In 1850 Caleb was listed in the United States census as a mechanic—a term often applied to builders as well as other artisans. He was apparently single and was living with family members and others in a large household headed by his sister, Arcade or Arcada. In the 1860 census, no occupation was given for him, and by 1870 he was listed as a farmer. At his death in 1885, the inventory of his estate included a box of tools and a chest of tools, with a combined value of $13.00.

The only known receipt for Brooks’s carpentry work is one of June 6, 1859, for $12.00 for making a coffin and case for Samuel Lindsey Swindell of Hyde County. Family memory, however, attributes specific buildings to him and describes his habits. His descendant, Mrs. Ercell Gibbs, recalled her grandmother’s accounts of Caleb Brooks as a self-educated carpenter who was slow but sure. According to Mrs. Gibbs, Brooks treasured his tools, kept them in top condition, and would never lend them.

The small geographical range of Brooks’s reputation as a builder is in keeping with the county’s remote location in coastal North Carolina, which affected the architectural character of local plantation houses. New Bern was the closest population center, and the model of the city’s Federal style houses was translated into a similar but simpler form in Hyde County. Especially distinctive in the county is the repeated use of the interior, exposed-face chimneys seen in North Carolina chiefly in New Bern and its sphere of influence. Built for educated men whose wealth was tied to the rich soil of Hyde County and who probably maintained business ties with New Bern, the three houses attributed by family tradition to Brooks are at the center of this trend, and he probably built other structures as well. (Mrs. Gibbs believed that he also built several more modest houses, all destroyed since 1930, between the villages of Nebraska and Middletown.)

The Riley Murray House (1821-1826), the largest of the three at 2 stories tall with a center-passage plan two rooms deep, is also the most elaborate. It features interior-end, exposed-face chimneys and is handsomely detailed with fluted pilasters at the entrance and Federal style finish throughout. The smaller center-passage plan Joseph Young House (ca. 1830), which is only one room deep, likewise has a classically treated entrance with colonettes. The neighboring Young-Roper-Jarvis House (1830s), built for Joseph’s cousin Richard Young, had a similar form and plan but was more simply finished, with details of cornices and other elements identical to those of the Murray house. All three have similarly treated chair rails and open-well stairs. Still unknown is what other buildings Brooks may have constructed, especially during the later years of his long life.