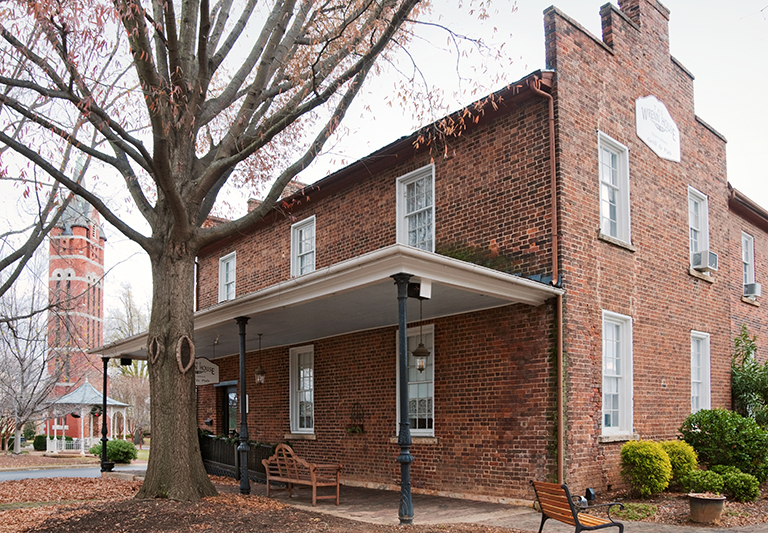 Robert Cox (fl. 1830s-1850s), a brickmason active in the western Piedmont communities of Lexington and Salisbury, is known to have constructed two substantial brick buildings in Salisbury, and he likely erected several others. He is one of the few brickmasons of his time and locale for whom any surviving work is known.

In 1839, 1840, and 1841, as a resident of Davidson County near Lexington, Robert Cox advertised his availability to employers in local newspapers including the Salisbury Western Carolinian of January 31, 1840, that he would contract with “any Person, or persons,” in Davidson and Rowan Counties who wanted houses, factories, or any other kind of buildings erected of brick, and promised to build them as cheap, as durable, and in as good style as any workman in this country.” Offering as well to “mould and burn the Brick,” he referred to his long experience in moulding and laying brick. He referred potential customers to two recent “specimens of his work” in Salisbury—a fireproof clerk’s office, probably the Rowan County Clerk’s Office, and the Salisbury Female Academy. Only the latter still stands.

Cox had taken the bid for the academy in 1838, in response to advertisements in February of that year that specified that the intended building would be a 2-story brick structure over a rock foundation, “to be done in a plain, but substantial and faithful manner and of the best material.” The resulting building, which takes essentially a domestic form, is constructed of brick laid in Flemish bond, with stepped gable end walls incorporating the chimneys. The interiors are finished with restrained Federal style woodwork. Similar features appear in other local buildings which might also have been Cox’s work. Prominent among these in Salisbury, as noted by architectural historian Davyd Foard Hood are the Cyrus West Building (ca. 1839, 203 S. Main St.) and the Smith-Pearson House (ca. 1847, 305 N. Main St.), both 2-story houses with Flemish bond brickwork and stepped gable ends, but their builders are not documented. Cox moved from Lexington to Salisbury by 1840, where he was listed in the United States Census of that year. In 1850 the census (the first to indicate occupations) showed the brickmason as head of a household that included his wife, Sarah, aged 42, five children (Susan, Pheby, Margaret, Burgess, and Nancy), and a 21-year-old brickmason, William Pool. Cox evidently owned no real estate. In 1851, the Salisbury Carolina Watchman of July 17 carried a brief account of a “narrow escape”: Robert Cox and his son aged about 14 years were building an “inside chimney” in a local house. When they had the chimney about 25 feet high, “the whole came tumbling down with a crash carrying with it the scaffold on which the lad was standing. He was of course incapacitated amidst the brick and timbers, a frightful scene for a parent to witness, but escaped injury, excepting a small scratch on the chin.” In 1860 Robert and Sarah Cox were still in Salisbury, along with two grown daughters employed as seamstresses. No information has been located about Cox’s subsequent life or work.