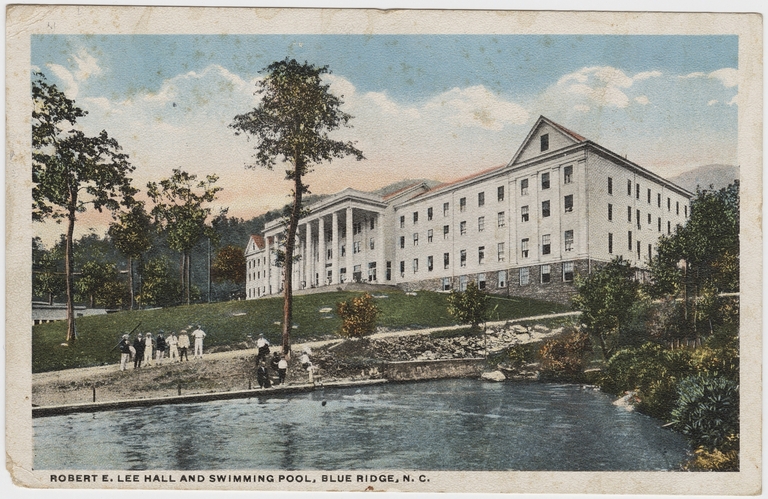 Louis Eugene Jallade (February 16, 1876-February 26, 1927), a native of Montreal, Canada, was a Beaux-Arts trained architect who practiced in Boston and New York. His only known work in North Carolina is Eureka Hall (Robert E. Lee Hall) at the Blue Ridge Assembly campus.

As related by Sandra L. Tatman in Philadelphia Architects and Buildings, Jallade came to the United States as an infant in 1877 and was naturalized in 1897. He was educated in New York schools and ateliers before going to Paris to study at the École des Beaux-Arts (1901-1903). He returned to the United States and worked in the office of Allan and Collins in Boston. In 1906, he established his own practice and had a successful career with a specialty in YMCA buildings. He also designed a range of property types including churches, schools, factories, residences, and libraries, with the Union Theological Seminary in New York especially well known. He was active in the New York Society of Architects, the Architectural League of New York, the American Institute of Architects, and the Beaux Arts Institute of Design.

The conference center was the brain child of Willis D. Weatherford, then the International Student Secretary of the YMCA for colleges in the south and southwest, who originated and pursued the idea of establishing a permanent campus, and he may have contacted Jallade to serve as architect for the initial buildings of the new YMCA student training center for Christian leaders of the South.

Although architects for many important buildings in western North Carolina chose more rustic or naturalistic modes regarded as suitable to the mountain setting, in this case either the client or the architect selected a more formal and classical style for the large frame building with an “immense colonial porch” of “lofty white columns like those at Arlington” (Asheville Citizen-Times, April 14, 1912; Charlotte Evening Chronicle, September 6, 1913)—Arlington being the Lee plantation house. Although the Colonial Revival style is often associated with “Old South” values, in this case it was used for an institution with a strongly progressive mission in a design that was likely intended to reflect the southern setting and spirit of hospitality, as was the initial name, Robert E. Lee Hall. It was renamed Eureka Hall in 2015.