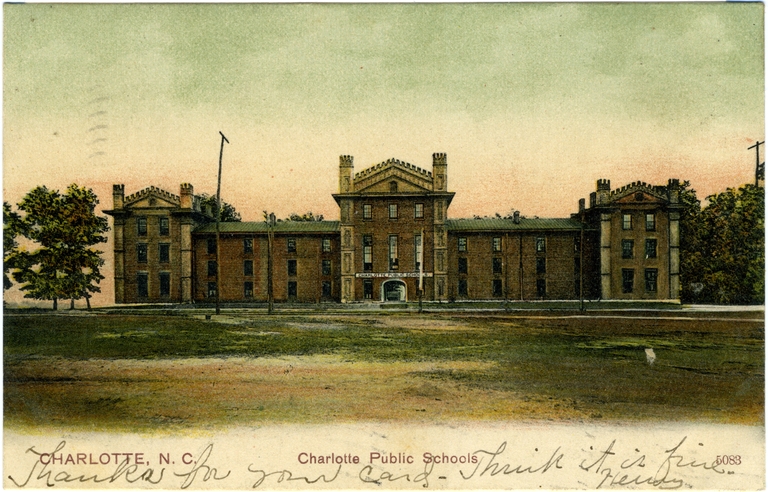 Jonas Rudisill (January 17, 1818-May 3, 1895) was a carpenter who worked in Charlotte for nearly half a century and typified the versatility of many 19th men in the construction trades; he identified himself as a contractor, building supply manufacturer, and architect. Although he advertised regularly in the local newspapers over many years, little is known of his projects, with the North Carolina Military Institute (1858) in Charlotte his principal known work.

At his death, the Charlotte Observer of May 4, 1895, reported that Jonas Rudisill was born at Beaver Dam, Lincoln County, and in 1839 married Miss Mary Caldiron (April 8, 1822-January 8, 1895) of Mount Mourne. He and his family moved to Charlotte in about 1850, where he established himself as a contractor. In 1850, the United States Census listed him as a carpenter in Charlotte aged 33, a native of North Carolina, and head of a household that included his wife Mary, 27; their baby, Sarah; Catherine Warlee [Wallack/Wallick?], aged 53 (Jonas’s widowed mother); four carpenters in their 20s; and two carpenters’ apprentices. He owned real estate worth $500.

For a time Rudisill was associated with one P. S. Whisnant in a manufacturing partnership, which they dissolved in 1857, as announced in a notice in the Charlotte North Carolina Whig of September 7, 1858. Rudisill planned to continue operating his Steam Plaining Mill,” to fill “all orders for Sash, Blinds, and Doors,” and to dress lumber. His advertisement in the same newspaper on December 7, 1858, pictured his 2-story factory and announced that along with manufacturing sash, blinds, and doors, he was an “Architect and Builder” with “Designs Furnished and Buildings Completed on the most reasonable terms and in every style of architecture.” His business was located on College Street at 8th Street. He continued to advertise in these terms as late as the Charlotte Western Democrat of January 24, 1860.

The only example of Rudisill’s antebellum contracting work found thus far is the North Carolina Military Institute in Charlotte. The Charlotte Democrat of June 29, 1858, reported that the contract for the building had been awarded to Rudisill (for the woodwork) and Taylor and Allison (for the brickwork), with the whole superintended by one Sydney Reading. The brick building was to be 270 feet long and the style “the Gothic Castle” which would make “quite an imposing appearance.” The Raleigh Semi-Weekly Standard, of October 6, 1858, carried an account from the Charlotte Democrat noting that the North Carolina Military Institute buildings were “in rapid progress of construction. The walls of the main building are nearly half way up, and the contractors, Taylor and Allison, and Jonas Rudisill, are pushing forward with the hope of having the building ready by the 1st of February.”

After the Civil War, Rudisill continued his activities. The 1870 industrial census recorded that he had a saw and planning mill and sash and blind factory that employed ten workers. The Charlotte Observer reported on January 20, 1874, that “an old contractor” predicted good prospects for builders in Charlotte that spring. Jonas Rudisill had just returned from “the North where he has purchased a complete outfit of the latest improved machinery for his new Sash and Door Factory and Planing Mills, and will commence business soon.” In the same newspaper of March 15, he announced, “having Finished my New Door, Sash and Blind Factory,” he was “now ready to contract for House Building” and to take orders for doors, sash, blinds, molding, brackets, etc., produced with the “latest improved machines, and nothing but the best kiln dried lumber.” He also continued his contracting business: the Charlotte Democrat of May 25, 1874, reported that Mr. Ransom Gray was building a “handsome” 2-story residence next to the Episcopal church, and “Mr. Jonas Rudisill, the good old Charlotte carpenter,” had commenced the work in April. It appears that the optimism of early 1874 waned as the impact of the Panic of 1873 spread, ruining the fortunes of many and leaving many builders unpaid for their work and investments. Perhaps to purchase the new equipment, on January 3, 1874, Rudisill had mortgaged the lot on which his machine shop stood, including a 25-horsepower steam engine and boiler and other machinery. In 1878, the mortgaged property was sold at auction (Charlotte Observer, November 16, 1878).

The 1870 census listed Jonas, a carpenter, with his wife, Mary, in a household that included daughter Sally, aged 20; Catharine Wallack, 72; and Charles Moore, a mulatto house carpenter aged 40. The 1880 census identified Jonas as a carpenter and house builder aged 64. His and Mary’s household included their daughter Sarah and her husband Minor C. Mayer and their children; and Jonas’s elderly mother, Catherine. The household also included a black cook and a black drayman.

Rudisill continued to be active in his business throughout his long life. He was an active Methodist, an Odd Fellow, and an alderman. He was survived by his daughter, Sally Mayer, and two brothers, Abel and Michael. Burial was at Charlotte’s Elmwood Cemetery.