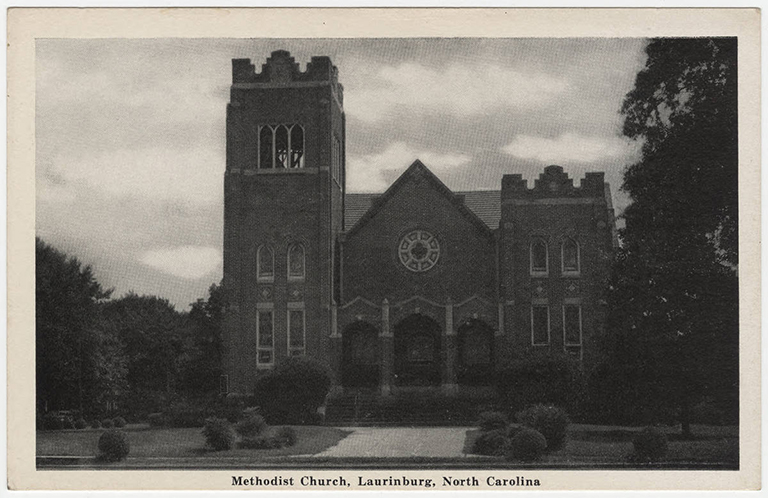 William Daniel Tucker (May 5, 1880-March 31, 1949) was a prolific local builder who left a longstanding mark on the architecture of his adopted home town of Laurinburg and the surrounding area. Earning a solid reputation with his projects encompassing many building types for more than four decades, he was considered the most prominent builder in Laurinburg’s history. His First Methodist Church of 1918 is one of the town’s most substantial local buildings of the early 20th century.

Laurinburg, incorporated in 1877, was one of the state’s many small towns that blossomed in the early 20th century as a railroad trading center and county seat in a cotton and tobacco producing area, which also developed a business in truck farming. As the county name and the names of many streets and residents indicate, it was part of southeastern North Carolina’s Scots settlement zone that reached from Wilmington into the Sandhills, with a strong Scots heritage and identity, as indicated by such local groups as the gentlemen’s “Argyle Club” for which Tucker would erect a building in 1908.

William Daniel Tucker, generally known as W. D. Tucker, was born in Union County, N. C., one of eight children of Henry, a farmer, and Mary Margaret (Maggie) Stegall Tucker. According to his son, W. D. Tucker, Jr., William left home at the age of 13 or 14 and migrated to the railroad town of Hamlet, N. C., where he found work at a lumber yard. It was in Hamlet that Tucker learned to read and to count. According to Tucker, Jr., despite his father’s lack of schooling, he could figure the cost of a building on a single sheet of paper.

In the 1890s, according to family history, or perhaps slightly later, W. D. Tucker moved to Laurinburg, where he began a career in building that continued until his death. He arrived in Laurinburg as it was expanding in size as well as rebuilding old downtown frame buildings with substantial brick ones. In 1905 Tucker married Bessie Beachem (May 28, 1877-April 25, 1952) of nearby Anson County. They had two children, Edwin Lee (1905-1971) and William Daniel Tucker (1912-2001). Tucker, identified as a contractor, and his family appeared regularly in Laurinburg in the United States censuses.

In addition, Tucker at various times owned a door and sash factory in Laurinburg, was a silent partner in two automobile dealerships, owned the Scotland Crate Company, which manufactured cantaloupe and asparagus crates for local truck farmers, and served as mayor of Laurinburg. Tucker was known as an exacting workman, his son recalled, and had a practice of building the foundation for a building and allowing it to set for six months to allow for settling. (It was often difficult for the owner to be willing to wait that long.)

Although Tucker built throughout Scotland County, he was primarily employed in Laurinburg. As the market town and county seat grew during the generally prosperous farming years from the 1900s to 1930s, Tucker gained so much work that he left a lasting mark on the town’s architectural development. Examples are especially abundant along East Church Street, South Main Street, and the neighborhood around the Central School. He built in all the popular styles of his day, including the Classical Revival, bungalow, Tudor Revival, Romanesque Revival, Colonial Revival, and in standard commercial and industrial forms.

Upon Tucker’s death, the Laurinburg Exchange published the following tribute: “He was a master workman and was intolerant of anything short of that in others. When he built a house people knew it was built right and that it would endure. . . . There are houses in Laurinburg, churches, schools, business structures, here and elsewhere, which bear the imprint of the master builder and the good workman. His exacting standards, his uncompromising insistence upon excellence of execution in any and all jobs, his integrity and the rule by which he lived are worthy of emulation of all those who would become good workmen and masterbuilders.”

Because Tucker was active in the early 1900s and lived until 1949, he and his building activities were remembered by a number of Laurinburg residents through much of the 20th century. Many of these sources are the children of Tucker’s clients and have personal recollections of their houses being built. It is not unusual for present-day owners to state with pride that their houses were constructed by William Daniel Tucker, the most prominent builder in Laurinburg’s history. He was buried in the Hillside Cemetery in Laurinburg.

Note: In 1980-1981 during his survey of Scotland County, architectural historian Thomas Butchko, author of this biography, interviewed many residents of Laurinburg who remembered Tucker or stories about him. He also corresponded with Tucker’s son, W. D. Tucker, Jr., who had moved to Alabama sometime before his father’s death in 1949. The building list below was researched and written by Butchko based on these interviews, as well as newspaper references and other sources. The status of the buildings (standing or no longer standing) has been updated by Michael T. Southern from digital mapping sources. Additional information newly available (2017) through Ancestry.com provides some further details about Tucker in the biography above. As of this writing, only a few issues of Laurinburg newspapers are available on Newspapers.com, and the newspaper references below are from Butchko’s research. Tucker evidently was not listed in Laurinburg in the 1900 census but appeared regularly in subsequent censuses. He might be the William Tucker, a carpenter aged 20, boarding in the Daniel Sides household in Cabarrus County in 1900.