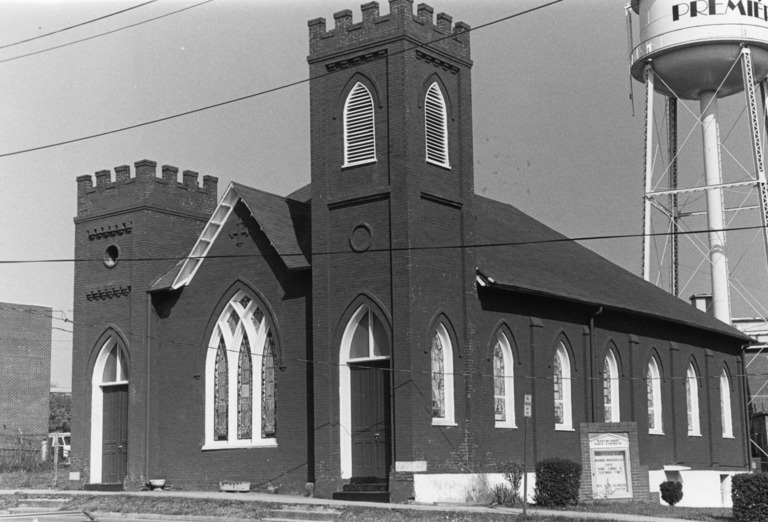 Philo G. (Gaither) Harbison (1856-1957) was a prominent African American carpenter and contractor in Morganton, N. C. during the late 19th and early 20th centuries. According to Suzanne Pickens Wylie’s Jonesboro Historic District National Register of Historic Places nomination, Harbison was born into slavery in 1856 but resided in his owner’s house and learned to read and write. His mother’s name was Lizia Harbinson (sic). The names Gaither and Harbison were prevalent among local whites as well as black citizens. Philo G. Harbison gained training as a master carpenter and became a contractor. Although the only extant houses cited to him are his own residence and a few rental houses for black residents, he is said to have constructed houses for white citizens as well. His best-known building is the Gaston Chapel A. M. E. Church (1910-1911), a substantial brick church in Gothic Revival style, built for a congregation that traces its beginnings to about 1872.

Harbison was part of the group of accomplished black citizens whom Janette Greenwood identified as “the better sort” in Bittersweet Legacy, an analysis of Charlotte in this period. He owned a commercial building on West Union Street and possibly a store on Main Street. His “Harbison Hall” was occasionally the scene of Odd Fellows meetings, concerts, and various social events. He owned for a time the only planing mill in Morganton. Harbison was consulted by the city council on issues concerning the local black community. Hardison and his wife were evidently active in St. Stephen’s Episcopal Church in Morganton. In the 1880s, he was active in the Republican Party (see Morganton Star, October 26, 1888). In 1889, Harbison left for San Francisco, and on August 1, 1889, the Morganton Star published a letter from him in which he wrote that while he liked California very well, he urged those who had homes in North Carolina should “stay at them, and listen not to those lies the agents tell you.” He subsequently returned to Morganton.

Harbison’s role during the racially charged political events of the 1890s is little documented in the local newspapers. He did publish in the Morganton Herald of August 20, 1896, a notice “respectfully request[ing]” the “colored voters of Burke county” to meet at the courthouse on August 29 to “consult as to what they shall do in the coming campaign”—in which Populists and Republicans (including most blacks) created a Fusion campaign against the white supremacist Democratic party. The Fusionists won in 1896, then lost in 1898 and 1900. It is not clear what stance Harbison or his friends adopted.

Harbison must have maintained a working relationship with leading white citizens, for the Morganton Herald of November 9, 1899 identified Hardison as “one of the most progressive colored men in Burke” and noted that he was having his brick store room on Union street refitted throughout.” In 1904, when Harbison went for treatment at a Baltimore hospital, the Morganton News-Herald of December 15 referred to him as “one of Morganton’s best colored citizens,” and when his daughter Mary graduated at the head of her class at Scotia seminary, the same newspaper (June 7, 1906) identified Philo Harbison as “a worthy Morganton darkey.” Harbison took an important role in building up the Jonesboro neighborhood, which developed primarily between about 1895 and 1935. Covering several acres of irregular terrain, the neighborhood maintains a semi-rural character. It comprises both large and small houses, but most of them are modest cottages, shotgun plan houses, and bungalows. Jonesboro was so called by at least 1898, but the area was occupied by black citizens as early as 1880. Residents of Jonesboro included some of Morganton’s most prominent black leaders, whose homes generally stood on W. Concord Street. Harbison is known to have built his own residence there, the Philo G. Harbison House, plus several shotgun plan houses on Jones and South Anderson Streets, which he used for rental housing. He likely built others as well.

Harbison’s death certificate gave his birth and death dates as January 28, 1856-August 2, 1957. His mother was identified as Lizia Harbinson (sic) and his wife as Lillian (Lillie). His father’s name was not given; from Philo’s middle name, as noted above, his father might have been a member of the locally prominent Gaither family. Philo married Lillie Perkins in Buncombe County on April 29, 1886. In 1900, Philo was listed as a house carpenter in Morganton, heading a household comprising Lillie and six children, and in 1920 he was listed as a contractor with a lumber mill and head of a household that included Lillie and four children. By 1940, at ages 84 and 73, respectively, the couple had one daughter in their household. At his death at the age of 101, Philo G. Harbison was buried in Olive Hill Cemetery at Morganton. His son, Philo Leroy Harbison (1894-1986), who also lived a long life, worked for the Pennsylvania Railroad and served in World War I. He too was buried at Olive Hill Cemetery (Asheville Citizen-Times, June 11, 1986). He was survived by a sister, Kathleen H. Ford of Morganton.