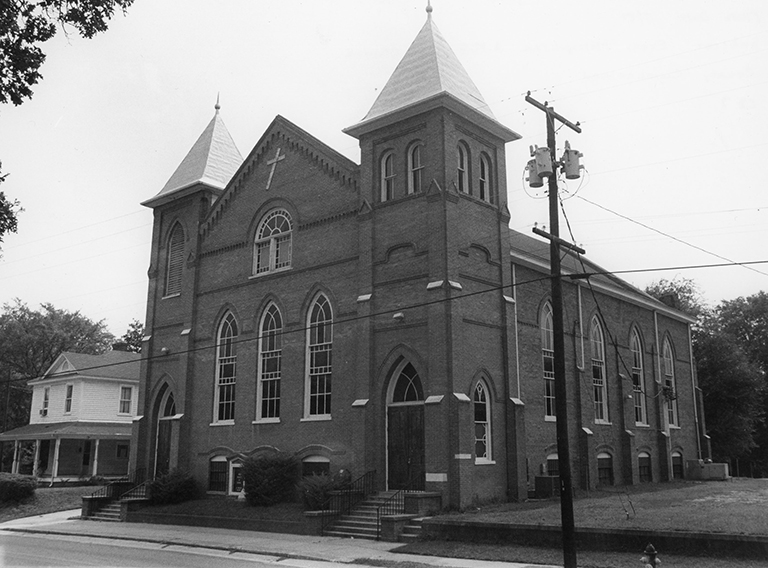 Dallas Perry (ca. 1845-1919) was an African American carpenter and builder prominent in Fayetteville in the late 19th century. Although his work encompassed a wide range of building types, his principal known surviving work is the venerable Evans Metropolitan African Methodist Episcopal Zion Church of 1893.

Indicative of his activities and stature in the community in the late 19th century, articles in the Fayetteville Weekly Observer took note of several of his building projects. On April 19, 1888, the newspaper reported that Perry had nearly completed a “very tasty residence” on Ramsey Street in Fayetteville, part of several “improvements” in that area of town.

On December 14, 1893, the same newspaper reported that Perry had drawn the plan and was superintending the construction of “the new Church edifice of the Evans Chapel congregation.” This was an important black congregation, having been founded ca. 1796 by a free black minister, Henry Evans, known as “the father of Methodism” in eastern North Carolina. The Gothic Revival, two-towered brick Evans Metropolitan African Methodist Episcopal Zion Church of 1893 still stands as a landmark of Fayetteville and home of the oldest church congregation in the city; Perry’s role is documented by the brief article in the newspaper.

Perry was probably best known for the Haymount Presbyterian Church (begun 1895), which was widely admired for having an extraordinarily beautiful spire. The Wilmington, N. C., Semi-Weekly Messenger of August 19, 1895, carried a report on its “largely attended” cornerstone laying ceremony, but the church history states that the “historic edifice” was erected by Perry in 1905. (It is possible that the project took this long to complete, with the tower perhaps the last part accomplished.)

In addition, on June 14, 1898, the Observer published a detailed description of the “elegant and convenient” new house of Captain J. B. Underwood on Green Street, noting its drawing room, parlor, dining room, butler’s pantry, and kitchen, plus bedrooms and bathrooms—all handsomely finished. Underwood “was his own architect, but he bestows unstinted praise on the contractor, our worthy colored citizen, Dallas Perry.”

No further articles about his projects have been found through newspapers.com; although it was common practice for white newspapers to carry news of black citizens and institutions before 1900, after the hardening of Jim Crow laws and practices following the elections of 1898 and 1900, that practice dropped off.

Little is known of Perry’s early life or how he learned the carpentry trade. The United States Census of 1870 showed Dallas Perry as a 25-year-old carpenter in the household headed by (his mother) Susan Perry, aged 48. Other Perry household members included Henrietta, 60, Smithey (a woman) aged 70, and younger men, probably Dallas’s brothers, Douglas and Robert, the latter a farm laborer. On May 3, 1877, Dallas Perry married Mary E. Leary in a ceremony performed by Episcopal minister A. A. Benton. The marriage record did not note the name of Dallas’s father but identified his mother, Susan Perry. Mary Leary’s parents were identified in the marriage record as Matthew Leary and Julia Leary.

Dallas Perry had married into one of Fayetteville’s most noted families of color: Matthew N. Leary (ca. 1798-1880) was a free mixed-race man who became a successful harness maker and property owner before the Civil War and one of the wealthiest citizens of color in town. His wife, Julia or Juliette was of French background—variously reported to have come from France or the West Indies. Matthew and Julia Leary had at least five children, of whom Mary E. was the youngest. Some of the Leary children left North Carolina for the North, including Mary’s brother Lewis Sheridan Leary, who was fatally wounded while participating in John Brown’s raid at Harper’s Ferry. Others of Mary’s siblings remained in North Carolina, including her politically active brothers Matthew Jr. and John S. Leary, the latter an attorney who was one of the first African Americans admitted to the North Carolina bar and taught law at Shaw University. For Dallas Perry, the marriage reinforced his connections with the local leadership and doubtless helped his business. Dallas and Mary emphasized the Leary family link by naming their children for Mary’s family members.

In 1880, the United States Census listed Dallas Perry, 34 a carpenter, heading a household that included his wife Mary E., 32, and daughter Julia L., aged 1, and in 1900 the census showed him as a carpenter aged 52, heading a household that included his wife Mary, to whom he had been married for 23 years, and their children [Matthew] Leary, 19, Mary E., 18, and Dallas L., 15. Just two households away lived the prominent African American minister James Hood and his wife and daughters. There were both black and white households on Ramsey Street at that time. The 1910 census showed a similar household, with the children now grown and daughter Mary employed as a music teacher at the “university.” This was present Fayetteville State University, which Mary Leary’s family had been involved in founding. As was true of several other prominent black artisans’ children, Dallas and Mary Perry’s sons became successful professionals, in this case physicians (see below).

Perry and his family lived in a Fayetteville neighborhood known for its notable black residents. Among the houses there were “spacious red-brick homes built by Dallas Perry, a noted black architect, and contractor J.W. Waddell.” The neighborhood included within a few blocks three doctors, three undertakers, two druggists, two ministers, a school principal, a half-dozen teachers, insurance salesmen, butchers, shop owners, a bookkeeper and a restauranteur. Many of the residents were members of St. Joseph’s Episcopal Church or Evans Metropolitan AME, while others walked to First Baptist on Franklin Street.

At Dallas Perry’s death in 1919, the Fayetteville Weekly Observer of May 7 noted the “Death of a Good Man” and cited him as “one of Fayetteville’s oldest, best known and most highly respected colored citizens. At that time he had been living with his son Dr. M. L. (Matthew Leary) Perry in Maxton. His other children included Dr. Dallas L. Perry of Winston-Salem, Dr. J. S. (John S.) Perry of Hamlet, and Mary E. Perry, a teacher of music at the “State Normal School” (present Fayetteville State University). The account said nothing of his occupation as a builder but noted that he was “a kind and affectionate husband and father and a staunch Christian, carrying with him in every undertaking the standard of righteousness.”