The imposing brick edifice in Gothic Revival style is the home of the city’s oldest independent black congregation, which began when black members of Edenton Street Methodist Church held separate services as early as the 1840s. It has a long, rich history. While maintaining the connection with Edenton Street Methodist Church until Emancipation, the black membership moved to this site in 1853, where they worshiped in a frame church (formerly Christ Church) that was moved to the site. After the Civil War, the church—known as the “African” church”—hosted the 1865 and 1866 state Freedmen’s Conventions, and allied with the A. M. E. denomination.

The congregation built a large brick church over several years, as funds permitted. The Raleigh Gazette reported on December 5, 1896, “We are pleased to note that St. Paul A. M. E. Church of this city is rapidly nearing completion. Hon. Stewart Ellison, who is general manager, is due much praise for the rapid dispatch with which he is having the work done. This church, when completed, will be one of the finest in the State. It will be a credit to the denomination, to the city, and to the race.”

Only a few years after it was completed, in July, 1909 the church went up in flames. Immediately, as the News and Observer of July 13, 1909, reported, a mass meeting was held at which local leaders including such prominent white men as Josephus Daniels expressed their support for the rebuilding, and widespread financial support ensued. The rebuilding incorporated the surviving brick walls. As related in the biographical sketch of Edwards, both he and white Raleigh architect H. P. S. Keller have been named as architects for the rebuilding.

The Charleston, W. Va. Advocate of March 3, 1910 carried another laudatory article about architect Edwards, which reported that he “was given the contract of designing and superintending the construction of St. Paul A. M.E. church, Raleigh, which is to take the place of the old church which was recently destroyed by fire. The new church, when completed, will cost about $75,000.” 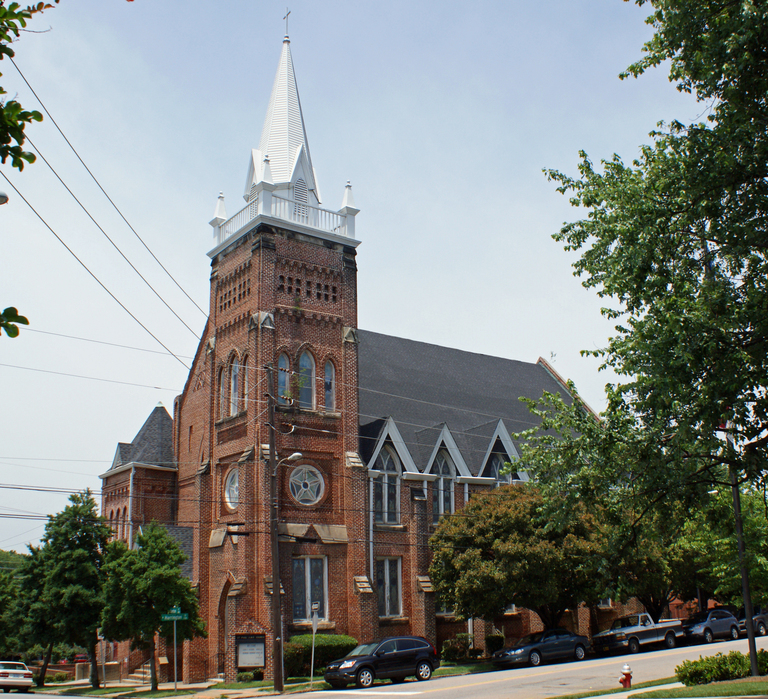