A panel on the building lists public officials of the time of its construction as well as H. L. Bonitz, architect, and R. H. Brady, contractor. The Wilmington Messenger of June 30, 1907, had reported that the design was by architects McMillen and Cooper, architects, of this city.” Bids had been received from contractors, including Brady, but all were considered too high. In a second call for bids, R. H. Brady took the commission on a bid of $7,500; the architects were still identified as Cooper and McMillen (Wilmington Morning Star, July 11, 1907). A few months later, Brady was reported as the contractor for a combination fire station and market house, at a cost of $10,000. For some reason, the city decided to employ a different architect: Henry E. Bonitz. On July 24, 1907, a notice to contractors announced invited bids for the consolidated market and fire house at 4th and Campbell streets, with plans and specifications to be seen at the office of H. E. Bonitz, architect. On December 22, 1907, the Wilmington Messenger reported that the new facility—“without a doubt the finest and best equipped fire engine house in the state”—was nearly complete and described its modern features in detail. Curiously, this account reiterated that the plans were drawn by Charles McMillen and the contractor was R. H. Brady. The Wilmington Messenger of April 5, 1908, however, reported that building was begun on October 5, 1907 and completed on April 2, 1908, and that the architect was H. E. Bonitz and R. H. Brady the contractor. McMillen, who left Wilmington in 1908, had evidently exited the project and Bonitz took it over. 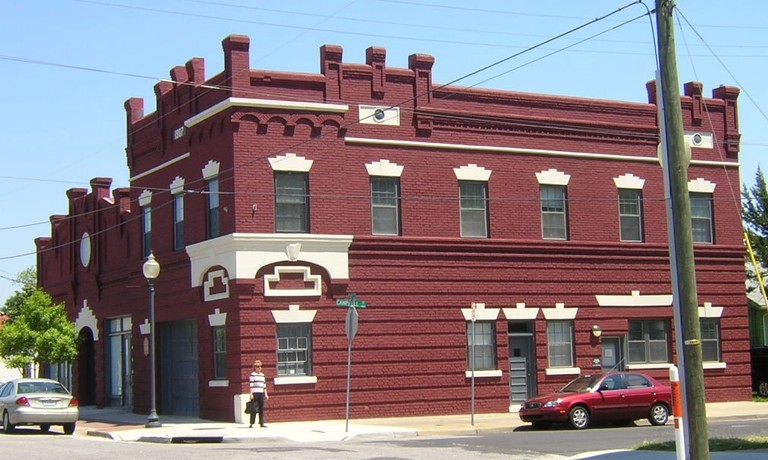