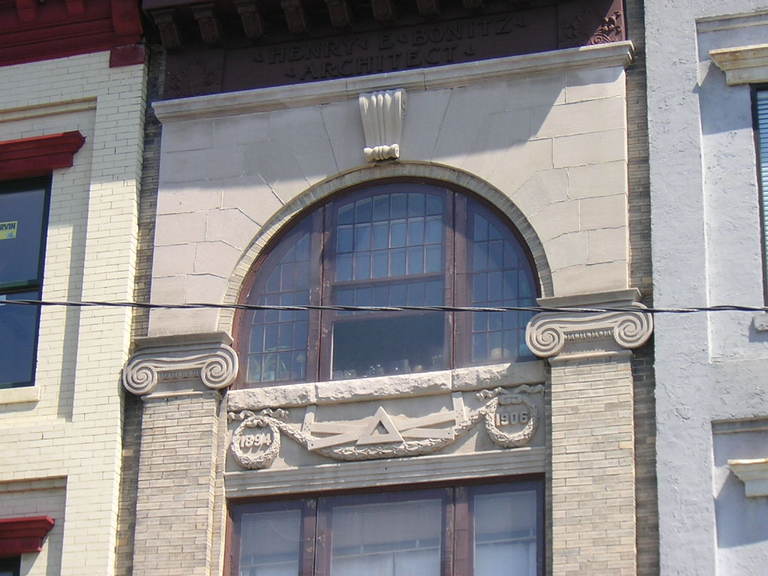 Henry Emil Bonitz (1872-1921), born in Goldsboro, North Carolina, of German parentage, established an extraordinarily prolific practice as an architect in Wilmington, with scores of projects in the port city and its environs, and many more in other towns and counties in North Carolina.

Henry Bonitz was a son of John Henry William Bonitz and Marie (Mary) Elise Stegner Bonitz. John, a native of Hannover, Germany, had immigrated to the United States about 1855 with his two brothers Henry and Julius. John worked briefly in Baltimore and then in Washington DC before moving to Goldsboro in 1859. In 1862 he married Marie Stegner (1845-1921), whose family he had met on board ship to America. He went into business in Goldsboro and was joined by his brother Julius, with whom he owned the Goldsboro newspaper, the Messenger. In 1886 or 1887 the Bonitz family moved to Wilmington, a city with an established German community, where they published the local Messenger for a time and operated the Bonitz Hotel at 2nd and Market Streets. (The hotel had been built as the Carolina Hotel in the 1840s by brothers Robert B. Wood and John C. Wood [see Wood Brothers].)

In Wilmington, young Henry Bonitz attended Tileston School before enrolling in 1889 at the newly established College of Agriculture and Mechanic Arts (present North Carolina State University) in Raleigh. In 1892, Bonitz “stood first in Mechanical Engineering,” and in 1893 he graduated in the first class of the college with the degree of bachelor of engineering.

After graduation, as noted in his obituary, Bonitz worked for a year and a half with the leading Wilmington architect-builder James F. Post (1818-1899) before inaugurating his own practice. From Post, Bonitz gained practical knowledge of the building industry as well as a greater understanding of the city of Wilmington. The first notice of Bonitz’s independent practice was an advertisement in the Wilmington newspaper in September 1894. He took a post-graduate course in Philadelphia in 1895.

Bonitz’s career was developing at the time when architectural professionalism was on the ascendancy in Wilmington and in the state. He was soon competing with other architects such as Charles McMillen, Burrett Stephens and Joseph F. Leitner. In the early 20th century, as noted by his grandson, John H. Bonitz, Jr., Henry Bonitz became one of the first licensed architects in North Carolina. His license certificate, dated July 16, 1915, was #46 as listed in the official registration book of the North Carolina Board of Architecture; he was among the early group of men who were licensed in the state based on their having been in professional practice prior to the licensing act of 1915.

Throughout his life, Bonitz’s German heritage served him well in encouraging a large patronage among German-descended clients, and his membership in St. Paul’s Lutheran Church opened doors for projects undertaken for the prosperous German communities in Wilmington and other towns in North and South Carolina. Especially notable are his many commissions for Lutheran and Reformed churches. When he married Kate C. Burnett at St. Andrew’s Presbyterian Church in 1898, he gained access to another large denomination of clients. The Bonitzes had four children: John Henry William, born October 19, 1898; Katherine Marie, born August 31, 1901; Marjorie, born June 24, 1905; and Katherine (Kathie), born June 22, 1913.

Bonitz had offices in several locations in Wilmington, beginning in the family’s Bonitz Hotel. From 1902 to 1905 he had his practice in the Chamber of Commerce building and then in the IOOF Building. From 1906 until his death, however, Bonitz had his office in his own building, the Henry E. Bonitz Office at 213 Princess Street, which features his insignia on the façade. His residential pattern followed a similar track, from living in the family hotel for the first seven years of his practice, then residing for two years at 213 N. 5th Avenue before moving into the house he remodeled for his family at 711 N. 7th Street.

Like most architects of his time, Bonitz developed his stylistic approach over the years. His first known independent work, the Woolvin-Warren House (1895, reflected the Italianate style favored by his first employer, James F. Post, in such features as the canopy porch and bracketed cornice, but it also incorporated elements of the coming Queen Anne style, including bands of colored glass surrounding the large plate glass windows and a spindled porch treatment.

Most of Bonitz’s 19th century residences display the Queen Anne style individualized by certain hallmarks, including a distinctive arrangement of small windows at the stair landings, and windows of varied shapes—square, rectangular, lozenge, circular, semicircular, and elliptical—some edged with colored glass. Around the turn of the 20th century, Bonitz like other architects shifted from the Queen Anne mode to a Neoclassical vocabulary, and by 1905 his houses typically displayed classical details. His 20th century commercial buildings often featured arched upper story windows and façades divided by classical pilasters, and he sometimes used cast iron pilasters at the street level to accentuate façades such as the J.H. Strauss Store (1914) in Wilmington. In his numerous church designs, he employed both Romanesque and Gothic Revival elements, typically rendered in strongly three-dimensional fashion with robust corbelling, buttresses, and towers. His Lutheran churches shared in the denomination’s propensity for red brick with vividly contrasting white accents emphasizing the bold forms.

For his masonry buildings, Bonitz employed brick from various suppliers. He was secretary-treasurer of Wilmington’s Hydraulic White Brick Company in 1901, and he used the company’s brick in 1902 for the Bank of Whiteville, and again in 1906 for the Monroe and Co. Furniture Store and the George R. French and Sons Store in Wilmington. A few years later, he used Borden brick, manufactured in his native Goldsboro, in the C.D. Maffitt Building (1912) in Wilmington and other works.

Because Bonitz’s family owned Wilmington’s newspaper, the Messenger, until 1908, the architect gained frequent publicity in the newspaper’s pages and thus generated an unusually full record of the buildings he designed. The Messenger reported chiefly on buildings that were actually built, but also mentioned designs that were only proposed. An example of the latter was the Masonic Temple on Front Street, for which Bonitz and Post both submitted designs, but the commission went to Charles McMillen, an architect from Minnesota who specialized in Masonic buildings.

Bonitz was active in professional and civic affairs throughout his career. He served as secretary of the North Carolina Institute of Architects in 1899; a member of the executive committee of the Southeast Architectural League in 1900; president of the Wilmington area’s chapter of the Agriculture and Mechanic Association (alumni of present NCSU) in 1914; grand secretary of the Knights of Pythias; and grand regent of the Royal Arcanum of North Carolina. He was secretary-treasurer of the Wilmington Stone and Construction Company and vice-president of the Wrightsville Beach and Suburban Development Company in 1907, for which he designed the large group of cottages the company built on Wrightsville Beach. Bonitz also held the position of building inspector of New Hanover County in 1905 and 1906.

About 1905 he began to take on apprentices and employees, many of whom became prominent in their own right. In May of 1905, the local newspaper noted that James Matthew Kennedy, who had been “connected with the office of Henry E. Bonitz,” was leaving for Raleigh to join the firm of William P. Rose and Harry P. S. Keller. Others of Bonitz’s apprentices and draftsmen included James L. Long of Hopkinsville, Kentucky; John D. Forbes of Baltimore; and William Michaelis of New York.

Henry Bonitz died at age 49, following an operation for kidney stones, at James Walker Memorial Hospital, a building where he had supervised construction. In his will, his benefactions showed a concern for children, especially orphans, in donations to four orphanages. According to his grandson, the architect’s original drawings were lost when his widow washed out his linen drawings to use for napkins and tablecloths. During his relatively short life, the hardworking Bonitz planned buildings in at least 37 of the 100 North Carolina counties. Of his 132 known works in New Hanover County, 53 are known to survive.