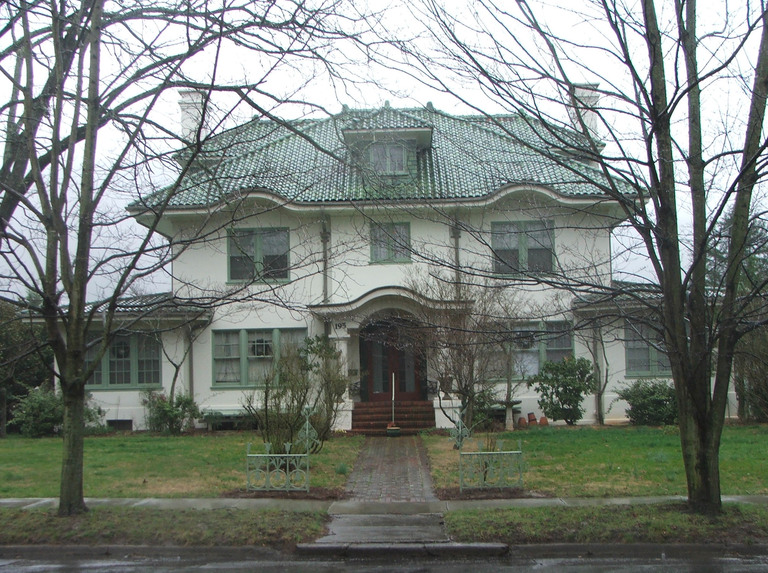 William J. East (1865-1936), architect, was a native of Bellevue, Pennsylvania, who moved to Asheville in 1912 and remained there the rest of his life. According to the Asheville Times (June 10, 1917), East studied architecture at the Polytechnic Institute of Pittsburgh, which “whetted the appetite of the Pennsylvanian and he went across the water to the Atelier Carl Bartberger of Carlsrhue [Carlsruhe], Germany.” He married Evalyn Ross of Pennsylvania, and for a time the couple lived with her parents. He practiced architecture in Pittsburgh for several years and was a president of the Western Pennsylvania American Institute of Architects.

Arriving in Asheville on February 6, 1912, East entered into the city’s lively architectural community, became an active Rotarian, and was at one time chief draftsman for the county. He was a founding member of the Architect’s Association of Western North Carolina in 1926. The Asheville Times of January 16, 1929, reported that he had been elected president of that group. East’s use of especially robust masonry work may reflect his German training. His best known project in the mountain city is the Castanea Building (1921), a boldly executed commercial building of local orange-brown brick with strong brickwork detailing and a curved façade paralleling the bend of the street. He combined brick with vivid terra cotta ornament in the I. O. O. F. Building and doubtless other structures. By contrast, he used sleek planar forms in the Newton School (1923) and the Haywood Building (1917-1919), the latter a large complex built with concrete mixed and poured on site.

Near Asheville, at the famed Presbyterian retreat center of Montreat, working under the guidance of the Rev. R. C. Anderson, president of the Montreat Association, East planned the large, stone Assembly Inn (1929), a fortress-like edifice where the architect and stonemasons used local river rock stone to dramatic effect, accented by the glitter of mica flecks, and marble floors from Tennessee. East also laid out plans for the Lake View subdivision and planned an office building there. Contemporary newspaper accounts stated that he designed a large number of residences and also specialized in industrial architecture. Although few of his houses have been identified, his drawings at the Pack Library include those for the Andrew Gennett House, a stuccoed residence with striking curvilinear roof of tile, which was built in the mid-1920s in the Grove Park neighborhood. East’s obituary in the Asheville Citizen of May 4, 1936, stated that he had designed buildings as far west as Ohio and as far east as New York, and singled out the Castanea and Haywood buildings among his Asheville projects. He was survived by his widow and a son, J. R. East of Cleveland.