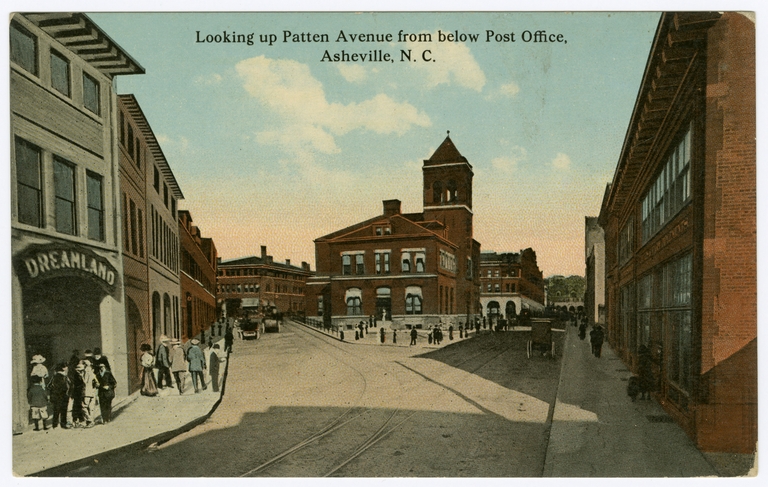 Peter A. Demens (May 1, 1850 - January 21, 1919), Russian immigrant, entrepreneur, and builder, was a bold if not always successful player in the derring-do capitalism of three late 19th century American boom towns. Before his arrival in Asheville in 1889, Demens had built a railroad on Florida’s Gulf Coast that led to the development of the town of St. Petersburg, named for his Russian birthplace. Although he lived less than three years in North Carolina before moving on to Los Angeles, he left three western North Carolina architectural landmarks, two of which still stand. One is the state’s finest remaining Romanesque Revival building; the other is one of the most unusual private residences in North Carolina.

Peter Demens was his anglicized name. Based on accounts he provided, he was born Piotr Alexewitch Dementief on May 1, 1850, in St. Petersburg, Russia, reportedly to an aristocratic family that owned estates in the province of Tver. He was well connected socially and well educated; according to his Los Angeles Times obituary, he achieved the rank of Captain of the Imperial Guard and the title “Marshall of Nobility.” A man of democratic political opinions, he immigrated to the United States in 1881 with his wife, Raisse, and their four children; three more were born in this country.

It is possible he was forced to leave Russia in the aftermath of repression following the February 1880 terrorist bombing of the Winter Palace in St. Petersburg. Demens told associates in Florida he was a “political refugee,” but after his death his daughter disputed that idea—perhaps to protect his memory from an undeserved association with the Bolsheviks—and attributed the move to his enthusiasm for American laissez-faire capitalism. His attraction to entrepreneurial risks and the winner-take-all atmosphere of American boom towns supports her claim, though there may be truth in both explanations.

Demens first settled in Longwood, Florida, and entered the lumber business; within a few years he was profitably building station houses for a branch of the South Florida Railroad. There is no evidence that he received any direct training in architecture or construction in his early years, and his role as a builder in this country was as a manager of money, men, and materials. Between 1886 and 1889 he devoted his energy to construction of the Orange Belt Railway from Sanford, Florida, to the Pinellas Peninsula, the site of present-day St. Petersburg, where he envisioned “a city of international importance” at the best natural harbor on Florida’s Gulf Coast. He faced enormous physical and financial difficulties. Unreliable backers delayed advance of credit; impatient creditors hounded the enterprise—at one point they chained the locomotives to the rails to force payment—and an angry group of laborers demanding overdue wages once threatened to lynch Demens. He averted disaster until the line was completed, but the railroad failed to generate needed revenues, and by mid-1889 Demens was forced to sell his interests to settle debts. But he had created the rail connection that made St. Petersburg possible, and either Demens or one of his associates named the new town after his Russian birthplace.

Demens’s motives for moving to western North Carolina are not explicitly known, but Asheville was booming in the wake of its own new rail connections and the excitement generated by news of George Washington Vanderbilt’s Biltmore project, and many ambitious men were moving there. At this time and later, Florida’s boom times were linked to Asheville’s. The Asheville Democrat of October 24, 1889, reported that a new planing mill, the largest of its type west of the Blue Ridge, had just opened with a capital investment of $60,000: “The plant is owned by Demens and Taylor [presumably A. M. Taylor, one of Demens’s partners in the Orange Belt Railway venture], who, just a few months since, came from Florida to Asheville upon a prospecting tour. . . . They determined to locate their mill here, and within 60 days time mill buildings, dry kilns, railway tracks, office building, etc., have been completed, and twenty thousand dollars worth of the latest improved and best woodworking machinery has been purchased, set up in perfect running order, and the entire plant ready for business.” The operation was soon called the P. A. Demens Woodworking Company; Taylor’s subsequent role in the enterprise, if any, is not known.

Demens also formed a partnership with tradesman Milton Harding to bid on government construction projects. By early May, 1890, they had won the contract for the United States Courthouse and Post Office building in Asheville, followed in June with the contract for a similar project in Statesville. In July, Demens was compelled to dissolve the partnership when Harding proved to be “an incorrigible drunkard.” As Demens wrote that month to Treasury Department officials in Washington: “he began to drink and for two weeks nobody knew where he was or what he was doing, and up to today he is not himself yet, the result of such a protracted spree.”

Demens continued alone on both projects as general contractor. The two Romanesque Revival buildings were designed by Treasury Department architects in the Washington office of Willoughby J. Edbrooke. The Statesville building survives today as the Statesville City Hall. Featuring warm red pressed brick with terra cotta and brownstone trim, it is generally considered North Carolina’s finest surviving building in the Romanesque Revival style. The Asheville building, of related design but with a tall central tower, stood downtown at the site of present-day Pritchard Park; it was demolished about 1931.

Reports filed by government inspectors on both the Statesville and Asheville projects reveal the problems encountered with subcontractors and materials suppliers for major building projects in the state. Of the Statesville building, inspector Edward Avery wrote: “In the city of Washington a building of this character could be completed in a year but here in North Carolina where there are no facilities for obtaining the materials close at hand, and where there is a great lack of skilled labor, and where there is so much time lost during the rainy season and delays by transportation, the contractors should have known better than to have bound themselves to one year.” And complaining about poor quality of the pressed brick work at Statesville, inspector Adolph Cluss wrote: “A Northern man should be brought here, and no inexperienced men be allowed to add to the mischief by new coatings and patchings.” Occasionally Demens’s personality peeks through the documents. Objecting to aspects of the masonry work on the Asheville building, Cluss wrote that it was done “according to the private practice and Imperial palace at ‘St. Petersburg, Russia’ as Mr. Demens explains to me in the presence of the Superintendent.” But inspectors consistently praised the woodwork installed by Demens’s shop.

Demens is believed to have had a more direct role in the design of his private residence in Asheville (the Demens-Rumbough-Crawley House, located at 31 Park Avenue above the French Broad River). The large 2-story brick house combines formal and decorative elements of the Eastlake, Queen Anne, and Italianate styles, but what makes it extraordinary is the heavy, four-stage layered cornice and the unusual form of the tower. These features have been called “Byzantine” by some observers, and, though their design source has not been determined, they may have precedent in 19th century Russian country house architecture. The heavily carved and paneled interior woodwork, which includes rich parquet floors, is among the most remarkable of the period in the state, and was installed to showcase the work of P. A. Demens Woodworking Company.

Perhaps disappointed with his prospects in North Carolina, Demens sold his Asheville property in February 1892 and moved to a third and even greater boom town—Los Angeles. There he did not enter the construction business, but did well in a steam laundry venture and invested his profits in citrus groves near Alta Loma. He returned to Russia briefly in 1905 and eventually became an occasional correspondent on European affairs for the Los Angeles Times. In 1916 he was associated for several months with the Russian government’s purchasing bureau in New York. After the abdication of the Tsar in February 1917, Demens was a strong supporter of the provisional Russian government headed by Prince Lvov, which Demens called “Free Russia” in his Times articles. (Lvov had visited Los Angeles and Demens about 1910 during a study tour of American agriculture.) Saddened by the Bolshevik overthrow of the short-lived republic the following October, Demens wrote no more for the Times. He died at Alta Loma on January 21, 1919.