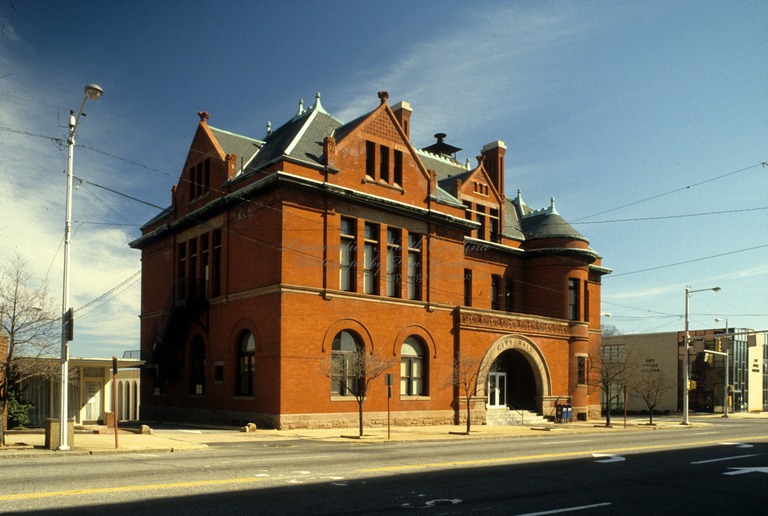 Willoughby J. Edbrooke (1843-1896), a Chicago architect, served in 1891-1893 as Supervising Architect of the Treasury and in that capacity headed the office that designed at least two imposing Federal buildings in North Carolina.

Over the years, Edbrooke had numerous commissions in the Midwest and planned the Georgia State Capitol in Atlanta. During his tenure as Supervising Architect of the Treasury, he favored the Romanesque style despite the growing popularity of neoclassical modes. Several architects and draftsmen worked in the office and likely drew up many of the plans and specifications, but it was Edbrooke’s preference for the Romanesque Revival style that defined the output of the office. Among his best known and most massive works is the Old United States Post Office in Washington, D. C. This monumental building, like many of the works Edbrooke planned, was not completed until after his death.

In North Carolina’s small cities, the substantial and elaborate brick buildings from Edbrooke’s office were often the most ambitious civic edifices in their communities, and the materials and workmanship required for their construction were often unfamiliar. Peter A. Demens was the contractor for Edbrooke’s Romanesque Revival style post offices in the state—one in Statesville and the other in Asheville. Reports filed by government inspectors on both projects reveal the problems encountered with subcontractors and materials suppliers. Of the Statesville building, inspector Edward Avery wrote: “In the city of Washington a building of this character could be completed in a year but here in North Carolina where there are no facilities for obtaining the materials close at hand, and where there is a great lack of skilled labor, and where there is so much time lost during the rainy season and delays by transportation, the contractors should have known better than to have bound themselves to one year.” Complaining about poor quality of the pressed brick work at Statesville, inspector Adolph Cluss wrote: “A Northern man should be brought here, and no inexperienced men be allowed to add to the mischief by new coatings and patchings.” In 1893, Edbrooke’s office advertised in the Reidsville Review of April 21, 1893 and other newspapers for bids to erect a post office in Reidsville, and the same newspaper reported on February 2, 1894 that the building was nearing completion but did not identify the contractors. It was a red brick building with polychrome decoration and a tower. Although the Asheville and Reidsville post offices have been lost, the Statesville edifice, converted to use as the city hall, stands as one of the state’s premier examples of the Romanesque Revival style.