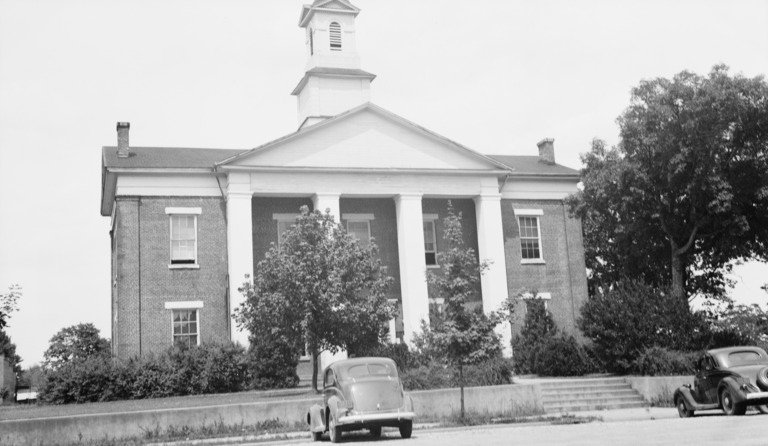 George Wesley Shackleford (November 20, 1818-February 26, 1881), a brickmason active in Asheville and much of western North Carolina, was frequently associated with leading carpenter-builder Ephraim Clayton. The two builders erected some of the region’s most stylish and substantial buildings of the mid-19th century.

Born in Tennessee, Shackleford (also spelled Shackelford) moved to Buncombe County before 1850. By that year he had $1,000 invested in a brick manufacturing establishment in Asheville in which seven employees produced 300,000 bricks a year valued at $3,000. Working with Clayton, he was involved in constructing many of the substantial brick buildings in the city and beyond, of which only a few have been identified.

Between 1853 and 1859 Shackleford and Clayton built the large, Greek Revival style Polk County Courthouse in Columbus, with the work divided by trades and each man to receive $8,000. This is the only documented building by Shackleford known to survive. Shackleford and Clayton’s agreement, located among Shackleford’s estate papers in Buncombe County records, described the brickmason’s work in detail: he was to complete “all the brick and stonework, including the cut rock, etc., to dig and wall the wall, build the pillars for the cover thereof, do the paving, kerbing, and everything that pertains to the brick and rock work, penciling and plastering, furnishing the materials at his own cost and boarding his own hands &c. “ (Penciling referred to the traditional technique of inscribing and whitening the mortar joints between the bricks to give a clean, neat appearance. The penciling on the building is still intact.) Later on, the two disagreed over the settlement of the account.

During the same period, in 1856-1857, the two men erected the original 2-story brick main building for Mars Hill College. When the college trustees failed to meet the $3,875 cost, Shackleford and Clayton seized Joe, a slave of one of the trustees, and kept him in the Buncombe County Jail until they received payment.

In Asheville, Shackleford and Clayton found work among the congregations building substantial brick sanctuaries. The Asheville News reported on August 11, 1859 on the “fine and spacious” Asheville Baptist Church, to which “Messrs. Clayton and Shackleford have the contract and are pushing it rapidly forward. When completed it will present an imposing appearance.” The Greek Revival style building measured 60 by 40 feet with a basement containing the Sunday school. Shackleford was a trustee of the congregation. In 1859 Shackleford agreed to complete the brickwork of a chapel for the Holston Conference Female College (later the Asheville Female College) in Asheville. The contract with James W. Patton and others, located in the Robert D. Gilmer Family Papers, included a spur to prompt completion: the brickmason was to receive $8.75 per thousand bricks if the work was completed by October 1, 1860, but if the deadline was not met, he would make only $7.00 per thousand bricks.

Shackleford and Clayton were evidently good friends, for Clayton named a son George Wesley Clayton. Nevertheless, in 1879, Shackleford sued Clayton for $1,402.28 he claimed was owed him on the Polk County Courthouse project. In 1880, the United States Census recorded that Shackleford was still making bricks in Asheville, with $1,000 invested in a $1,500 firm that employed seven hands to make bricks. No specific building projects have been attributed to him in the post-Civil War period. Shackleford died in 1881, leaving a small estate.