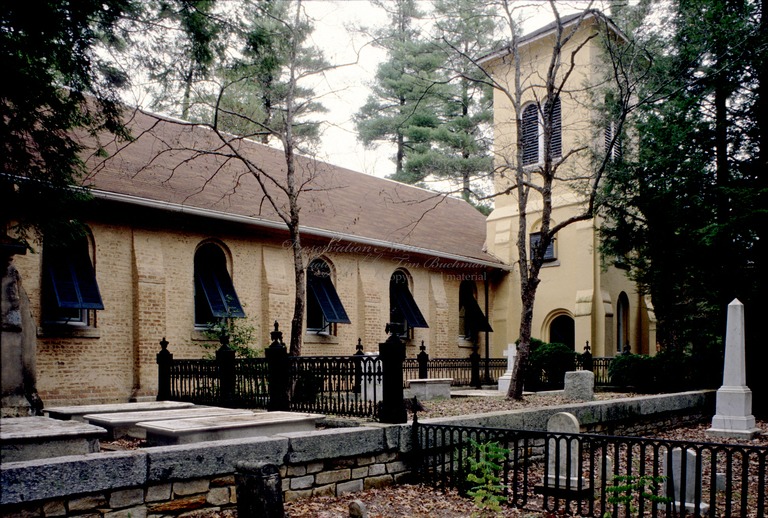 Ephraim Clayton (1804-August 9, 1892), a carpenter and builder from a prominent pioneering family in the area, developed a large contracting business that was among the most important in western North Carolina and also extended into neighboring states. His works included many of the most stylish and substantial buildings of their day in a region still dominated by simple, traditional building.

Clayton was born near the Davidson River in the southern part of old Buncombe County that forms present-day Transylvania County. He was the youngest son of Lambert and Sarah Clayton, who were both members of leading early families in western North Carolina. Lambert Clayton had moved to North Carolina from Delaware before the American Revolution and fought in the war. In 1782 Lambert married Sarah Davidson, the only surviving child of John (“One-eyed John”) and Nancy Brevard Davidson, early settlers who were killed by Cherokees in 1776. Sarah was raised by her uncle, Ephraim Brevard, for whom she named her son Ephraim. Lambert Clayton amassed large landholdings in western North Carolina and in 1792 was appointed one of the justices of the peace to organize Buncombe County. John (“Swamp John”) Clayton, Ephraim’s brother, represented Buncombe County in the state legislature for seven sessions between 1826 and 1836. Ephraim Clayton’s education and training as a carpenter are unknown.

A rare example of an antebellum builder who came from a prosperous leading family, he probably received some capital from his father to help finance his building business on such a large scale. Doubtless his parents’ stature and connections helped his business as well. By the 1830s he was receiving commissions in Georgia and South Carolina as well as much of western North Carolina. Between that time and the Civil War, he is known to have built four courthouses, four churches, one hotel, two college buildings, a large bridge, and a large number of houses—and he doubtless constructed other projects as well. He became a civic leader in Asheville and, as noted at his death, “was always foremost in any project that tended to the advancement of the city.” In the 1840s Clayton was living in Hendersonville, but by 1850 he had moved to Asheville. His obituary claimed he had brought to Asheville “the first planing machine ever used in Western North Carolina.” The United States Census of 1850 listed him in Asheville as a “house builder and carpenter” with a capital investment of $16,775 in his business. In that year he employed twenty-five men, used $9,500 worth of materials, and built twenty-five wood, brick, or stone houses valued at $25,000. Using steam power, he used 500,000 feet of lumber per year. He owned real estate worth $3,275, and seven slaves. By 1860, the “master carpenter” owned eleven slaves and had several free workmen in his household. He was operating a saw and planing mill and a sash and blind factory in Asheville. Capitalized at $7,000, his mill and factory employed steam-powered equipment and ten men to produce goods valued at $12,000 per year. With the onset of the Civil War, Clayton converted his factories to make firearms for the Confederacy.

Clayton gained widespread fame as a builder. Buncombe County historian F. A. Sondley wrote in 1922 that he “built probably more structures in North Carolina, South Carolina, and Georgia than any other two men.” Only two examples of his work outside North Carolina have been identified: the Lumpkin County Courthouse (1836-1838) in Dahlonega, Georgia, a 2-story brick structure that now houses the Dahlonega Gold Museum; and buildings at Wofford College in Spartanburg, South Carolina, including the Main Building (1851-1855) designed in Italianate style by Charleston architect Edward C. Jones. When the college buildings were completed, the Asheville News carried a story from South Carolina on January 18, 1855: “Mr. Clayton is equal to anything in the line of practical architecture. Cool and unmoved against a vast array of detail, he calmly and shrewdly adapts the means to the end, and never overlooks the conditions of success, nor fails in the attainment of the desired results. Guided by Mr. Clayton, no one need fear of contracting to build for a given sum, and having to pay a third more than he bargained for.” Clayton was also associated with Charleston architect Jones on two projects built for Charleston clients in North Carolina. In 1853 Jones provided the vestry of St. John-in-the-Wilderness Episcopal Church in Flat Rock (a summer resort community known as “the Little Charleston of the Mountains”) with an Italianate design for enlarging their church, and Clayton was awarded the contract. In 1857 Jones also designed a Gothic Revival style brick building for Calvary Episcopal Church in Fletcher, another summer resort for Charlestonians, and Clayton won the $6,000 contract. Jones and Clayton may also have collaborated on some of the many summer houses erected or remodeled in picturesque styles for Charleston families in Flat Rock and other summer resorts.

Because Clayton’s trade was as a carpenter, when he contracted for brick buildings he used other men to accomplish the brickwork. Some may have been his slaves or hired artisans. He often worked with brickmason George Wesley Shackleford, for whom Clayton named one of his sons. In 1853 Clayton and Shackleford contracted to build the Polk County Courthouse, a Greek Revival brick edifice, for $16,000. Each man was to receive $8,000, and Clayton got an extra $450 for furnishing the clock in the cupola. The agreement stated that Shackleford was to do the masonry (see George Wesley Shackleford), while Clayton was to complete “all the woodwork and everything pertaining thereto, the roofing, the painting, locks, hinges, nails, etc., all the iron for the prisons, make the cages, etc., to do all the enclosing and roofing of the well, etc., the lightning rods and to furnish and place the clock.” The building was completed in 1859. The two men also worked together on the original building for Mars Hill College in Madison County (1856-1857). When the college trustees could not pay the cost of $3,875, Clayton and Shackleford had Joe, a slave belonging to one of the trustees, seized and held in the Buncombe County Jail until they received their payment. Clayton also erected a wide range of other structures, including works in Transylvania County, Caldwell County, and Yancey County. According to Buncombe County historian F. A. Sondley, Clayton built an especially fine house in Transylvania County, now lost—evidently the house built for Charlestonian William Ward and later owned by the Lowndes and Everett families. A photograph shows a handsome 2-story dwelling with double porch richly treated with picturesque sawnwork, in a mode similar to work in Flat Rock. Clayton is also credited with building the John Wesley McElroy House, an unusually stylish example of Greek Revival architecture in Burnsville, for his brother-in-law.

It is interesting to speculate whether Clayton was involved in construction of such structures as the imposing, colonnaded Patton’s Hotel at Warm Springs, Madison County, or the remarkable series of stylish picturesque residences located near the Buncombe Turnpike in Buncombe, Henderson, and Transylvania counties (see Bishir, Southern, and Martin, A Guide to the Historic Architecture of Western North Carolina). Much of Clayton’s work concentrated in Asheville. There he built the Greek Revival style Buncombe County Courthouse in 1848 and three of the city’s main churches, all of brick: the Greek Revival style Asheville Presbyterian Church (ca. 1837-1841), later his home church; Trinity Episcopal Church (1850), a Gothic Revival building from a plan “in the pointed style” by noted New York Gothic Revivalist architect Frank Wills; and with Shackleford the Asheville Baptist Church, another Greek Revival structure, in 1859 for $4,000. With Shackleford, too, he built the Newton Academy (1857-1858), where construction was supervised by his son Thomas L. Clayton, who subsequently testified in a suit over payment. An unusual project was the War Ford Bridge across the French Broad River near Asheville, a 500-foot-long toll bridge built for businessman William Patton. The Asheville News observed on July 31, 1856, that “when fully completed . . . this will be the most handsome as well as most substantial bridge of the kind in this section of the country. Mr. Clayton is a thoroughly scientific and practical man, and undertakes nothing that he does not carry out well.”

Other (lost) Asheville buildings attributed to Clayton in his obituary and by Sondley include the Morrison House on College Street; his own house on Spruce Street; and the William Johnston Building (1840) at the corner of Church Street and Patton Avenue. There were other notable brick buildings in Asheville in which Clayton and possibly Shackleford may have been involved. The picturesque villa style Osborne House known as the Ravenscroft School has been tentatively attributed to Clayton: he had frequent dealings with Joseph Osborne, for whom it was built in the 1840s. After the Civil War, Ephraim Clayton turned his contracting business over to his sons Thomas and John. (A third son, George Wesley, named for Clayton’s business associate George Wesley Shackleford, was a West Point graduate who led the local militia in defeating a Union attack on Asheville on April 6, 1865.) Asheville business directories show that from 1867 to 1878 he was operating an iron foundry. In 1870 he was living in Transylvania County and identified as a railroad contractor. Still keen to keep up with new opportunities, as railroad construction neared Asheville in the 1870s he did contract work on the Spartanburg and Asheville Railroad and the Western North Carolina Railroad. He also served as a director for the latter company. Clayton lived in Asheville for many years in his house on Spruce Street, but died at his home near Emma, outside of town, on August 9, the day before the celebration of Buncombe County’s centennial. On August 10, 1892, the local newspaper reported his death, identifying him as “the largest contractor and builder in Western North Carolina.” On August 14, the Asheville Democrat described “Colonel Clayton” as “an old resident, and one of the best known citizens of western North Carolina. . . . . He was a native of Buncombe Co., and for years lived in Asheville, doing a profitable business as contractor and builder.” He was predeceased by his wife Nancy McElroy of Yancey County, and their four sons survived him.