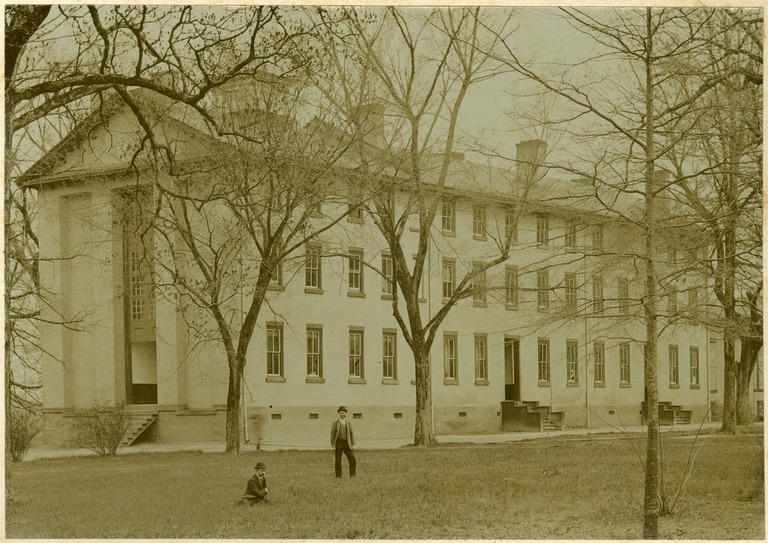 James Patterson (d. 1799) was a resident of Chatham County best known as the builder of the first university structure, now known as Old East, at the newly established University of North Carolina in Chapel Hill, Orange County. He likely constructed other buildings in the area, but none has been documented.

On July 19, 1793 Patterson contracted with the building commissioners of the recently established university to erect a brick structure to house the initial activities of the institution, which was located on an essentially undeveloped rural site. Large by standards of the time and place, it was to stand two stories tall and measure 96 feet 7 inches by 40 feet 1/2 inch. The relatively simple design—essentially that of two houses side by side—was provided by John Conroy. Bricks were made near the construction site by George Daniel and John Hogan, and lime for mortar was furnished by Thomas Rogers of Stokes County.

Patterson’s agreement, typical of the era, called for him to construct the building, including all woodwork and plastering, “in a neat, proper, faithful & workmanlike manner.” The contract also described the intended building in extensive detail and made reference to drawings. Two elevation drawings and a plan appear on the verso side of the contract (See http://docsouth.unc.edu/unc/unc02-01/unc02-01.html and Alcott, The Campus at Chapel Hill). In the contract, Patterson along with two supporters, George Lucas and Patrick St. Lawrence, provided the performance bond of 5,000 pounds guaranteeing the job. He received at intervals nearly 2,000 pounds as payment. Likely in connection with the project, Patterson bought 10 acres of land with a sawmill near Chapel Hill in the fall of 1793 as well as rights to timber on land of Hardy Morgan and Abraham Allen. Construction began promptly, the cornerstone was laid with full Masonic honors on October 12, and the building, the oldest state university building in America, was in use by students early in 1795—making the university the first state university to open its doors. The following August, Patterson was still petitioning the university treasurer for full payment for his work.

Patterson also submitted bids for other university buildings, including a frame Steward’s Hall and completion of the President’s House, but the contracts were awarded to others. He may have built for himself a house in Chapel Hill: in October 1793 he bought lots 4 and 5 in Chapel Hill for 108 pounds, and two years later he sold those two lots “with all improvements” to William Nunn for 265 pounds; that year, Nunn advertised that he was living and keeping “a house of Entertainment” at the university, where James Patterson had lately lived.

Little is known of Patterson’s building operations. His correspondence with university officials mentions his employment of enslaved workmen, whose identities are unknown. He also employed at least one white workman, as evidenced by his advertisement in 1795 in the Halifax North-Carolina Journal for one Robert Creight, a bricklayer and plasterer who had run off with tools, two horses, and other possessions. Patterson had a friendly relationship with Samuel Hopkins, the builder of the President’s House and Person Hall at the university, and he was also acquainted with Rhodham Atkins, builder of the State House in Raleigh. It is not known if Patterson himself possessed construction skills or if he, like some contractors of the day, just employed or owned workmen to execute contracts he made. At his death in 1799 at his Chatham County plantation, known as Montpelier, James Patterson left his widow, Amy, an estate valued at 3,622 pounds. He owned 9 slaves, 1,330 acres of land, and two stud horses; stud fees helped support his widow for several years afterward.