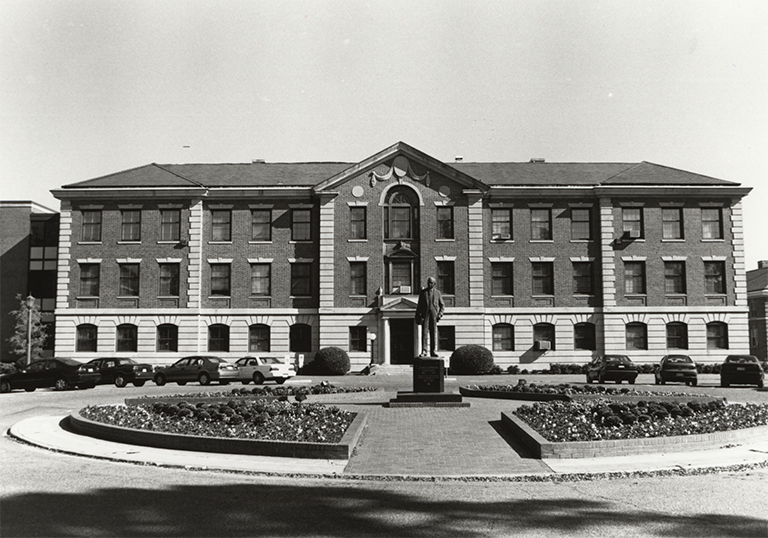 Atwood and Nash was a prolific engineering and architectural firm established in 1923 by engineer Thomas C. Atwood and architect Arthur C. Nash. Most of the firm’s work was in Chapel Hill, Durham, and Raleigh, but the partners also planned buildings in Wilmington, Asheville, and elsewhere. With differing backgrounds—Atwood in engineering and management, Nash as a Beaux-Arts trained architect—the two brought complementary skills to the partnership. Blueprints for their Alexander Sprunt House in Wilmington carry the official name of the firm in the corner, and T. C. Atwood also signed his name on a line for “engineer” and A. C. Nash signed his on a line for “architect.” More information about both men and their work appears in their individual biographical entries.

Atwood and Nash became associated in 1922, when Atwood was already the engineer in charge of the expansion of the University of North Carolina at Chapel Hill, heading up the T. C. Atwood Organization, and Nash arrived in the spring to replace H. P. Alan Montgomery as the lead architect in the organization.

At first Nash was simply identified as architect in the Atwood organization. Not long after Nash’s arrival in Chapel Hill, the Charlotte Observer of June 20, 1922 reported, the T. C. Atwood Organization was the architectural firm for the Carolina Inn, a hotel and club adjoining the campus in a private project led by John Sprunt Hill, the influential university leader. The Observer explained that a “tentative design” for the “Colonial structure” had been prepared by Arthur C. Nash, “the architect in the T. C. Atwood Organization, with the goal of having a building “distinctively Southern, impressive yet simple and friendly.”

According to university historian Louis Round Wilson, the partnership was formed in April 1922, but thus far no newspaper references to the partnership have been found from before 1923. The partnership was certainly in place by autumn of 1923. The Daily Tar Heel of March 27, 1923, identified the “architects of the T. C. Atwood Organization” as designers of the inn, and did so again on October 6, 1923. But the latter issue of the newspaper also cited Atwood and Nash, Inc., as architects for a facility for the university medical school, and the Daily Tar Heel of November 16, 1923 cited “the firm of Atwood and Nash” as “the University architects.” Thereafter, references to Atwood and Nash were frequent.

This firm also took on private and public projects beyond the university as well. These included several impressive Georgian Revival residences in Raleigh, Wilmington, and elsewhere. In addition, Atwood and Nash employed their familiar Georgian Revival vocabulary in red brick for new buildings for North Carolina Central University in Durham and for Peace College in Raleigh. The firm employed a dignified neoclassical treatment in stone for the Revenue Building in Raleigh to harmonize with the State Capitol across the street. A different spirit informed their State Fair Exhibition Buildings in Raleigh, an expansive, stuccoed structure with cheery Spanish character.

In 1929, Atwood and Nash decided to open an office in the booming mountain city of Asheville, where they had previously designed the Tudor Revival style John Sprunt Hill House in Biltmore Forest for Hill, a Durham resident and University of North Carolina leader with whom they had worked closely on university projects and the Carolina Inn. On October 22, 1929—just days before the stock market crashed and burst Asheville’s development bubble—the Asheville Citizen reported, “Atwood and Nash, Inc., architects, whose home offices are located in Chapel Hill, yesterday opened a branch office in Asheville, with Lindsey M. Gudger as local manager. The Asheville office is located in The Citizen Building, at 25 Haywood Street.” The Citizen noted that “T. C. Atwood, engineering member of the firm, was supervising engineer for the construction of the famous Yale Bowl. A. C. Nash, architectural member of the firm, is a graduate of the Beaux Arts, Paris, and has been identified with the modern architectural movement in various parts of the United States for a number of years. Since the present firm was organized six years ago, it has designed building projects whose value totals $30,000, 000.” The newspaper listed among the firm’s “major structures” the library, dormitories, and Kenan Stadium at the University of North Carolina; the Revenue Building and buildings at Peace College in Raleigh; the Masonic Orphanage in Oxford; the Goldsboro State Hospital; and university stadiums in Georgia and Alabama.

Atwood and Nash’s partnership continued until Nash’s retirement in 1930. Thereafter, Atwood formed a partnership with H. Raymond Weeks as Atwood and Weeks, with Nash serving in a consulting capacity.