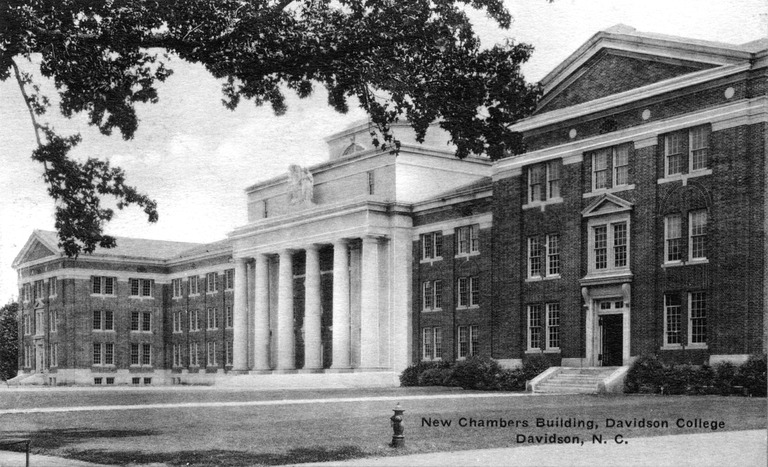 Henry Clossen Hibbs (1882-1949), a leading Tennessee architect of the early twentieth century and a specialist in collegiate architecture, is best known in North Carolina for his work at Davidson College near Charlotte.

A native of Camden, New Jersey, Hibbs studied architecture at the University of Pennsylvania from 1899 to 1904, and during summer vacations apprenticed with architect Frank Miles Day and Brother of Philadelphia. After graduation, he worked with the Philadelphia architectural firm of Cope and Stewardson and then with several New York firms: George B. Post and Sons, D. Everett Wade, Van Vleck and Goldsmith, and Ludlow and Peabody. The last named firm, headed by Charles Smith Peabody, a graduate of the Ècole des Beaux Arts, was commissioned to plan the campus and buildings for the George Peabody College for Teachers in Nashville. After completing plans for a University of Virginia-style quadrangle in 1914, the firm sent Hibbs to Nashville to supervise construction of the classically composed buildings.

The assignment proved a turning point in Hibbs’s career, for he decided to stay in Nashville. He continued to work for Ludlow and Peabody in Nashville until 1916, then established his own practice and received commissions to design several dormitories at the Peabody campus in 1917. From then on, alone and with partners, he specialized in campus planning and academic buildings throughout the South. During the 1920s Hibbs worked with associates Henry Clinton Parrent, Jr., a Nashville architect who joined his firm in 1921, and John Horace Parmelee, a Knoxville architect who joined his firm in 1928.

During the 1920s Hibbs and his associates designed numerous university buildings and campuses, chiefly in the popular Collegiate Gothic style. In Tennessee, he produced designs for Vanderbilt University, Ward-Belmont College, Scarritt College, Meharry Medical College and Fisk University at Nashville; Middle Tennessee State University at Murfreesboro; West Tennessee Insane Asylum at Bolivar; and Southwestern University (now Rhodes College) and Kennedy General Hospital at Memphis. The Scarritt and Rhodes projects earned him Gold Medal awards from the American Institute of Architects. Beyond Tennessee, his collegiate projects included Mary Baldwin College in Virginia, Hendrix College and Galloway College in Arkansas, the University of South Carolina at Columbia, and the University of Tulsa in Oklahoma.

Hibbs’s work at Davidson College resulted from his approaching the college president in 1922, the year after the school’s main building burned. Davidson College was a small liberal arts college established by Presbyterians and opened in 1837 in the town of Davidson, a few miles from Charlotte. As one of the richest private colleges in the South before the Civil War due to a bequest of more than $250,000 from Salisbury, North Carolina, merchant Maxwell Chambers, the school had completed on the eve of the war the massive Tuscan style Chambers Hall (1856-1860), designed by architect Alexander Jackson Davis of New York, as the main building and centerpiece of the campus. The endowment was lost during the war, but the school worked to recover and grow, with Chambers Hall a symbol of strength and continuity. In 1921, fire destroyed Chambers Hall, leaving only its towering columns, which stood until 1929. Assisted by funding from Rockefeller heirs, the college set out to build a suitable replacement for the central edifice.

As correspondence in the Davidson College Archives shows, Hibbs wrote to college president William J. Martin on February 22, 1922, that he had heard “through friends of mine connected with the Christian Educational movements of our Church,” that the college might be “considering the possibility of increasing its building equipment. You will probably find it necessary to employ an architect at some time to assist you in carrying out your plans.” He suggested that the college would be “best served by an architect who has had extensive Eastern training in college work and also years of experience in adapting that training to Southern conditions.” He related his extensive experience in college architecture and named several references, and he also proposed to meet with the college administrators and prepare drawings for fundraising purposes, and not to be paid for drawings of any building unless it was constructed. President Martin consulted Hibbs’s references, explaining the importance of the building to the college and that he wanted a reliable architect familiar with college architecture and the “details of the Southern Colonial type.” One reference praised Hibbs’s character and experience and commented, “I have worked with a number of the best known architects in the country and I regard Mr. Hibbs as one of the best trained and one of the most able men in the profession. I doubt if any man in the country knows and feels as keenly the true spirit of Southern Colonial architecture as Mr. Hibbs. I am sure that you and the friends of Davidson College would be very proud of a building designed by him.” After considering several architects, in autumn 1922, the college building committee selected Hibbs as architect to build the new Chambers building in a sequence of phases.

Employing a Beaux Arts “Southern Colonial” style that harmonized with other campus buildings, Hibbs designed the monumental Maxwell B. Chambers Memorial Building (1924-1929) as a symmetrical composition with a domed and porticoed central section and flanking wings. The south wing was completed first in 1925, followed by the other sections in 1928-1929. “New Chambers,” as it was called, housed a 1,200-seat auditorium, banquet hall, classrooms, and administrative offices. Evidently pleased with Hibbs, in 1940, the college commissioned Hibbs to design the neoclassical-style Martin Science Building and adjacent Hugh A. and Jane Parks Grey Memorial Library (Sloan Music Center), which were completed in 1941. In addition, Hibbs planned at least one dormitory and some fraternity houses at Davidson. He was also commissioned by Queens College in Charlotte to design a Fine Arts Building (ca. 1941), for which drawings survive in the Hibbs papers, but the project evidently did not proceed, likely because of wartime restrictions on construction.

Besides academic commissions, Hibbs planned a variety of buildings in Nashville including the American Trust Building, where he maintained his penthouse office, and Calvary Methodist Church. During the Great Depression, he designed New Deal-funded projects in Nashville and beyond. During the 1940s his firm changed names with the arrival and departure of associates and partners, and continued to concentrate on collegiate designs, often for the same institutions the firm had served previously. At the time of his death, Hibbs was working on a design for a state library and archives building adjacent to the Tennessee Supreme Court, and the project was completed by his associate Henry C. Parrent.

Hibbs was instrumental in promoting architectural professionalism in Tennessee, serving in the 1920s as secretary of the Tennessee Board of Architectural and Engineering Examiners and as first president of the reorganized Tennessee Chapter of the AIA. At the time of his death, Hibbs was one of only three architects in Tennessee honored as a Fellow of the American Institute of Architects. His papers are housed in Special Collections at the Nashville Public Library.