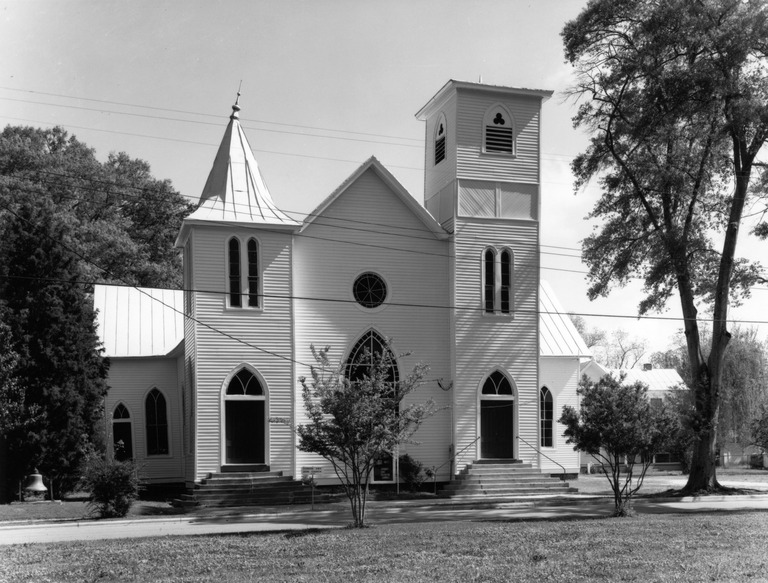 The Badham family of carpenters, among the most prominent builders in late 19th century Edenton, included at least three generations: Miles Badham I (ca. 1811-1870s), his son Hannibal Badham, Sr. (1845-1918), and Hannibal’s sons Hannibal Badham, Jr. (1879-1941), and Miles Badham II (1877-1925). Their lives and work were researched and discussed by Thomas R. Butchko in Edenton: An Architectural Portrait.

The earliest known builder of this name was Miles Badham, whose name appeared among the workmen paid by planter James Johnston during the 1815-1817 construction of his plantation house, Hayes, designed by William Nichols near Edenton. It is not clear whether this man was free or enslaved, black or white. (There were several white men named Miles Badham in Chowan County from the 18th century onward, including a Myles Badham, aged 15 and probably white, who was apprenticed to Thomas Hankins at the cabinetmaker’s and joiner’s trade in 1792.) James C. Johnston did own at least one slave named Miles Badham. In an April, 1863 letter to his heir, Edward Wood, Johnston singled out a few of his slaves for special treatment or emancipation, including Aaron, Davy Blount, Maria, the elderly Osborne, and Miles Badham. He directed Wood, “I wish you to let Myles Badham, as he is called, work for himself and his family and children, live with you if it is agreeable to you and they are willing to do so; if not set them all free and let them shift for themselves, but I know they will be better off with you if they are satisfied.” By the time Johnston died on May 9, 1865, the Civil War was over and his slaves had been freed by law. If the Miles Badham whom Johnston freed was the same who worked on Hayes in the 1810s, he would have been quite elderly by 1863. More likely, he was a younger man of the same name, the Miles Badham born about 1811 and thus aged about 52 in 1863.

By 1870, when the first census after the Civil War was taken, there were several Badham family members living in Edenton. In that year, black house carpenter, Miles Badham I,aged about 59, was head of a household that included his wife, Mary, 58, and two apprentices, Aaron and Allen Badham, as well as a girl, Susan, 16, who was in school. Although he could not read or write, Badham owned $1,000 in real estate. Miles Badham I evidently conveyed his skills as well as his property to his descendants. His son, Hannibal Badham, Sr. (1845-1918), and Hannibal’s son, Hannibal, Jr. (1879-1941), became house carpenters, while Hannibal’s son Miles II (1877-1925) became a carpenter for the railroad. The family is regarded as being among Edenton’s leading builders in the late 19th and early 20th centuries.

Their best known landmark, built by Hannibal Badham, Sr., is the imposing, towered Kadesh A. M. E. Zion Church (1897), a frame building in Gothic Revival style. It was home to an important congregation begun in 1866 from Edenton Methodist Church. Hannibal Badham, Sr., is also thought to have built other community buildings including the John R. Page Masonic Lodge (ca. 1890), named for another prominent black Edenton builder, and originally an Odd Fellows hall.

The Badhams also built residences, including their own homes. These are located on East Gale and East Church streets, some on land inherited from Miles Badham I. Most striking is the ornate Hannibal Badham, Jr. House (ca. 1900), which Hannibal Badham, Sr., built for his son in the Queen Anne style popular at the time. The elder Badham also built a house for his son Miles II, on land he gave to him. For his sister, Hellen Badham Blair, Hannibal, Sr., built in 1897 a 2-story house on a lot that was part of the land they inherited from their father, Miles. Hannibal, Sr., who married first Betsy Creecy, built his own family’s 2-story frame residence about 1880. After her death, he married in 1884 Evalina Williams Badham (1863-1935), a schoolteacher from New York who came to teach at a Freedman’s school. For her, Hannibal, Sr., erected a schoolhouse in the 1880s next to the family home. The Badham family also erected numerous other buildings in Edenton, which have not yet been identified.