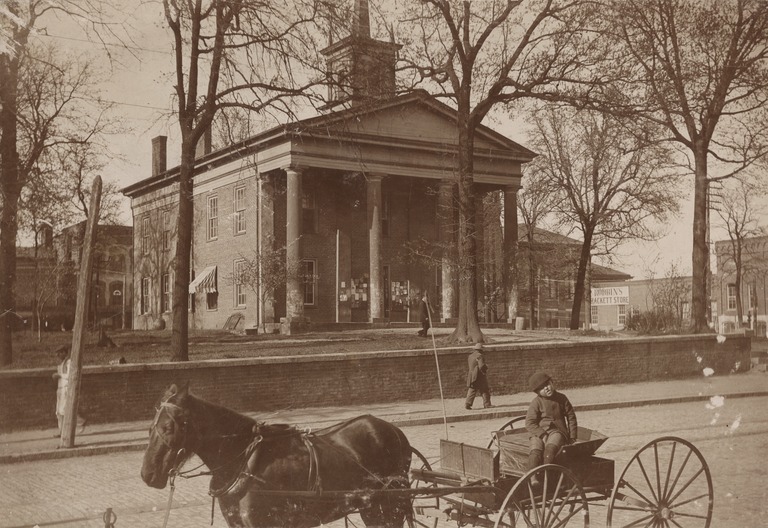 Francis Levin Fries (Oct. 17, 1812-August 1, 1863)—who preferred to be known simply as Francis Fries—was a progressive industrialist, civic leader, and builder in the Moravian community of Salem, North Carolina. Rooted in Moravian traditions yet attuned to new ideas, Fries was instrumental in transforming Salem from a congregational town into a community in the cultural and economic mainstream, and moving its industries from domestic handicrafts into the era of mass production. As a pioneer textile manufacturer, Fries visited mills in northern cities to study machinery and methods of production, and he maintained a lifelong interest in building and architecture. In addition to building factories, he took a role in the design and the construction of the Greek Revival style Forsyth County Courthouse (1850) and the Salem College Main Building (1853-1856).

Francis Fries was born in Salem, the eldest son of John Christian William Fries (known as William) and Johanna Elizabeth Fries. William Fries came to North Carolina in 1809 following an education in the Moravian school at Niesky, Germany. Francis’s parents hoped he would enter the Moravian ministry, and after preparatory school he went to Nazareth Hall in Pennsylvania for classical and theological courses. He returned to Salem and taught at the Salem Boys’ School, but he soon turned to the study of law under local attorney Emanuel Shober and was licensed to practice law in 1833. By 1836 he had become an agent for the newly formed Salem Manufacturing Company and launched a lifelong interest in machinery, building, and architecture. He traveled to Paterson, New Jersey, and other northeastern cities to study mills, and according to family records, he drew the plans and supervised the construction for Arista Mill (Salem Manufacturing Company Building).

In 1838 Fries married Lisetta Maria Vogler, daughter of Salem silversmith John Vogler. By 1839 Francis and his father William had made plans to build a woolen mill east of the Salem Manufacturing Company on New Shallowford Street (now Brookstown Avenue). On October 25, 1839, the minutes of Salem’s governing board noted that William and Francis Fries were planning to build a woolen mill, and that the board favored the idea. The Fries planned to use slave labor and teach the slaves to operate the mill machinery, a proposal that aroused concern in the Salem community. Through his stance on slavery and his quest for industrial innovations, Fries became one of the leaders in the assimilation of Wachovia’s Moravian culture into that of the larger South, and he eventually encouraged the church to release its control of business and personal lifestyles in Salem. On April 19, 1840, Fries resigned as agent for the Salem Cotton Manufacturing Company to begin construction of the Fries Woolen Mill, with backing from his father-in-law Vogler.

Fries’s diary of 1840 recorded his direct involvement in constructing the woolen mill, along with his father-in-law and some of his slaves. On April 15, 1840, he noted, “Mr. J. Vogler, Richard Napier, Henry, myself and Al lay down foundation stones till towards noon, when rain drives us in”; on April 24, “Self and hands raise inside and outside sca[ffolding]”; and so on. His diary recorded that the first wool was carded on July 17, 1840, only 88 days after construction began on the factory. On June 25, 1841, “Al [a slave] carding all day—myself and Elic [a slave] lay plank floor in lower part of addition.” On July 29, he recorded that the slaves were “rather worsted from loss of sleep so put Edward Holland to carding and let them take a nap. Run all night again. Holland up all night and the boys a half night each. Brother tends boiler and engine till twelve—myself till morning.” In 1842 he added spinning machinery, and soon after this looms for weaving. In 1846 Francis took into partnership his brother, Henry W. Fries, and the company became known as F. & H. Fries Manufacturing Company.

Francis Fries continued to make trips to northeastern cities to purchase machinery and study methods of production, and he shared his findings with his friend, textile pioneer Edwin M. Holt of Alamance County. Holt also informed Fries of innovations he discovered on his own northern trips. Holt’s house in Alamance County was designed by architect Alexander Jackson Davis, and it may have been through Holt that Fries became acquainted with the New York architect (see below). Holt and Fries also knew fellow industrialist and modernizer John Motley Morehead, whose house, Blandwood, was an important Davis design.

Like Morehead and others, Fries coupled his interest in manufacturing and building with improvements in transportation, and he supported construction of the Plank Road that led from Fayetteville to Bethania (the Moravian community only a few miles from Salem). On May 14, 1853, he recorded in his diary, “Plank Road being surveyed and located to Bethania. Some excitement.” On March 14, 1854, he wrote, “Self with eight hands . . . and four mules and two wagons set fence along plank road through father’s plantation.” Fries was also one of the original stockholders and directors of the North Carolina Railroad, of which Morehead was president.

When Forsyth County was formed from Stokes County in 1849, Fries was one of the new county commissioners selected to choose a site for a county courthouse. The town of Winston was established to serve as county seat, not far from Salem. Family and local tradition state that Fries designed as well as built the 1850 courthouse, a temple-form brick building in Greek Revival style. He noted on April 29, 1850, “Lay brick at Court House,” and on the next day, “353 brick brot from Court House to F. & H. Fries.” As described in 1898 by Francis’s granddaughter, Adelaide Fries, “The portico, 12 feet wide, stretched across the entire front, the roof being supported by four large pillars, each 30 feet high. In the vestibule, stairways on the right and left led to the second floor, which was devoted to the Court Room. The first story had a corridor running from south to north with three rooms on each side.” Whether Fries did any private projects during this period is unknown. Given his proximity and his role as a modernizer in Salem, as well as his use of Greek Revival stylistic elements, it is possible that he had some role in the design or construction of the large Belo House (1859, 1860) with its towering Corinthian columns, but no such involvement is cited by tradition or documented in known records.

On September 26, 1853, Fries noted that he had proposed to the principal of the Salem Female Academy (Robert de Schweinitz), “to build a school-house—giving it a general supervision buying the materials and then having the work done on school account at $7000, or I would give the matter supervision, but on my own account do the bricklaying, making doors shutters at what I won’t have to pay others for like work, and then take $500 for such attention.” The next day, “Mr. de Schweinitz has seen his colleagues and reports that they take the first proposition. I buy the brick [and] lumber and hire hands to do the work on school account—in same manner as I have been building for myself—Expenses of my trip north I pay myself but school pays consultation fee of architect.”

On October 29, 1853, Fries was in New York where he saw “Alex Davis architect in the morning about the school building,” and on the next day, “pd. A. J. Davis architect $25.00.” As cited by Mills B. Lane, Davis noted in his own diary (Oct. 29-31, 1853), “Design for Francis Fries, Salem, North Carolina, 2 elevations for a female Seminary, 4 stories high.” How faithfully Fries followed the Davis design is not clear; the drawings are not known to survive. W. A. Blair stated in Ashe’s Biographical History (1905) that Fries “carefully planned and with his own hands made the drawings and specifications of the Main Hall” and supervised its construction. The main body of the building follows a simple rectilinear format, with the massive portico of Doric columns lending it style and presence and a contrast with Salem traditions. Construction began in 1854 and was completed in 1856 under Fries’s supervision. His notations in his diary record stages of construction: tearing down the previous schoolhouse in June 1854; “Start corners of schoolhouse with Holder & Houser two masons,” July 18; installing tin roof on October 24; “Begin on Portico to school building” on April 30, 1855; agreement with George Hope to plaster the building and the columns, May 14, 1855; building interior partitions, Feb. 5, 1856.

In 1857 Francis Fries was elected to the North Carolina legislature from Forsyth County. After his death on August 1, 1863, his brother, Henry W., and later his sons, John William, Francis Henry, and Henry Elias, continued to operate F. & H. Fries Manufacturing Company and to play major roles in the development of Salem and Winston-Salem.