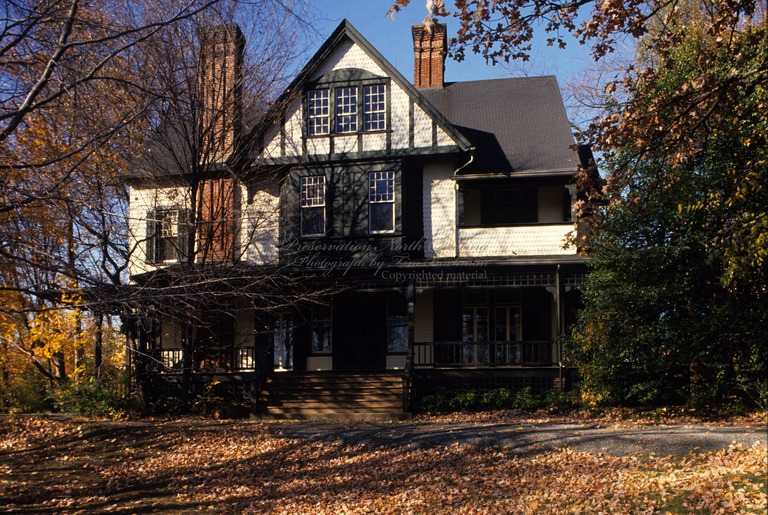 Charles A. Fogle (1850-1892) and Christian H. Fogle (1846-1898), partners in the contracting firm known as Fogle Brothers, were leading builders during an era of major industrial and urban growth in Winston and Salem (present Winston-Salem), constructing a large proportion of the factories, civic and commercial buildings, and housing for the burgeoning manufacturing towns.

Charles and Christian Fogle were sons of Salem cabinetmaker Augustus Fogle and his wife Lucinda Schneider, who like many in the community had German forebears. Augustus was a prominent citizen who served for several years as Forsyth County sheriff.

The business began in 1870, when Charles A. Fogle and a fellow Moravian woodworker, J. Gottlieb Sides, opened a small planing mill in an old brewery in Salem. The next year, Charles’s brother Christian purchased Sides’s interest in the business, and the two brothers moved their machinery to larger quarters on Belews Creek Street. Within a decade of these modest beginnings, Fogle Brothers had risen to dominate the local construction industry as tobacco manufacturing began to transform the courthouse village of Winston and the neighboring colonial Moravian town of Salem into fast-growing industrial cities. Along with the smaller and shorter-lived Miller Brothers firm, the Fogle Brothers were responsible for building practically all the massive tobacco factories, warehouses, dwellings, tenements, and commercial structures that rose from the 1870s to the end of the century. After the founders’ deaths, the firm continued under the same name into the 20th century.

Although few records survive to document the activities of the Fogle Brothers during their first decade of business, account books from the 1880s shed light on many aspects of the manufacturing and building firm. The ever-increasing demand for buildings in Winston and Salem led the brothers to expand their operations several times, as they enlarged their planning mill, added sash-and-blind machinery, and engaged a large work force of carpenters, bricklayers, and laborers. By the late 1870s the firm maintained more than thirty men in the field during the winter months, and hired additional workers for the traditional building seasons of spring and summer. Census records show many men in the building trades who identified their employers as Fogle Brothers. In the mid-1880s, the company constructed, on average, thirty-six buildings per year, which included small frame tenements, substantial Queen Anne style residences, iron-fronted commercial blocks, and tobacco factories and warehouses.

Some of the most important buildings erected by the Fogle Brothers were from designs made by outside architects. In 1884 they erected Hylehurst in Salem for manufacturer J. W. Fries from drawings prepared by New York architect H. Hudson Holly. The large Queen Anne style frame house was hailed by a local newspaper as “one of the most convenient and best dwellings in both towns and reflects credit on the builders Fogle Brothers.” Even more ambitious was the Salem residence of Dr. Nathaniel S. Siewers, designed by New York architect Max Schroff in 1893. Known as Cedarhyrst, the stone Gothic Revival residence features elaborately carved interiors of several varieties of hardwoods.

Although generally Fogle Brothers contracted with clients to construct buildings, they also erected several buildings as speculative ventures. In these cases, the client was the market. Most of these buildings showed an overlay of standard machine-made materials and ornaments applied to traditional house types, which ranged from simple two-room dwellings for laborers to 2-story houses with several rooms and projecting wings. For more pretentious houses, Fogle Brothers like builders in other cities enlivened familiar house types by adding a bay window, a porch that wrapped around two or three sides, a turret, a wing, or a mansard roof. They employed a mixture of materials and textures—weatherboards, shingles, stone, iron, and brick—to give these buildings a more “substantial” character.

From 1885 to 1887, the firm erected nearly a dozen two-room frame cottages which were rented to tobacco factory workers, who included black as well as white men and women. Supplied with lumber and other materials from the factory and employing light frame construction, the field crew could erect these “negro cabins” and “factory tenements” in a matter of a few weeks at a cost of no more than $200 per building. Whereas typically the owners of textile mills erected housing in “villages” for their workers, whether in rural or urban settings, for the most part tobacco industrialists did not create villages or supply housing for their factory workers; generally other individuals and companies erected rental housing for these workers and their families. For the merchant and managerial class, Fogle Brothers erected houses with five to eight rooms. Unlike the smaller tenement houses, they constructed the larger houses with the intention of selling them immediately.

Other speculative building projects included a brick block of apartments in Salem, built in 1886 in partnership with local industrialist Henry E. Fries. The apartments featured such amenities as electric lighting, gas heating, and running water. (Henry E. Fries, son of builder and civic leader Francis Fries, was involved in developing electricity in the city, first with a local generator and later with a pioneering hydroelectric plant on the Yadkin River, which supplied electric power to Salem.) The cost for the property, materials, and construction amounted to just over $10,000, to which each party contributed half. So successful was this venture that Fries and the Fogles embarked on a more ambitious apartment scheme five years later. They purchased a lot near the Moravian graveyard in Salem and hired Baltimore architect Charles L. Carson to design five 4-story apartment houses. The 2-story brick apartment house known as Fogle Apartments, or Fogle Flats, is also credited to the firm. In addition to these residential projects, the Fogle Brothers entered into the speculative commercial market as well. The urgent demand for tobacco warehouses and factories in the 1870s and 1880s probably led the firm to erect their own brick factory, which they leased to manufacturers in need of more space. By the end of the century they had staked a substantial interest in developing a speculative building market in the twin cities.

With connections with Winston’s and Salem’s business elite (due in part to their Moravian heritage) and a solid reputation for good craftsmanship, the Fogle Brothers developed a dominant position in the manufacture and supply of lumber and other building materials not only in town but also in the surrounding counties of the northwestern Piedmont. Contemporary newspapers and booster publications lauded their role in the increasing prosperity and importance of their community. Trained in the Moravian craft tradition, Charles and Christian Fogle were esteemed by their contemporaries not so much for their skills with hammer and saw as for their well-earned reputation as responsible and perceptive businessmen who not only knew the details of their woodworking trades but were well versed in the principles of investment and finance. Using their influence and connections with local industrialists, they created a virtual monopoly in the building trades for nearly thirty years.

After the deaths of both brothers, and despite the rising competition from new firms, the business was incorporated as Fogle Brothers Company under the direction of H. A. Pfol. Although the Great Depression forced the company to cease construction operations in 1932, Fogle Brothers continued to supply building materials from its 1883 warehouse and offices on Belews Creek Road into the late 20th century. After the firm closed, their records were given to the Moravian Archives in Winston-Salem.

Note: No systematic catalog has been made of the several hundred buildings erected by Fogle Brothers from 1871 to 1932. Most of the early buildings have been razed or destroyed by fire. In pockets of West Salem, many of the surviving dwellings from the late 19th century were probably built by Fogle Brothers as speculative housing or contract work. The brief building list here serves as a guide to the variety of work the firm executed in Winston-Salem, and further building entries may be added as information is obtained. A thorough study of their work, using their account books, local newspapers, and other sources, is needed.