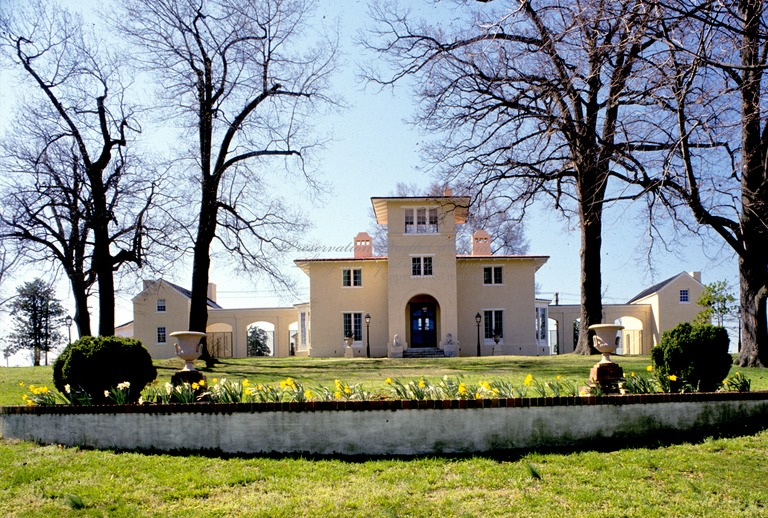 The Conrad family of builders from Davidson County, who also formed a firm called Conrad and Williams with their partner John Wilson Williams, constructed some of the most important and advanced buildings in the western North Carolina Piedmont during the antebellum period. The Conrad family possessed traditional skills as cabinetmakers and carpenters, but they developed the expertise to execute modern buildings from designs by Alexander Jackson Davis and other architects in a region where urban-trained building artisans were few and far between. The family of tradesmen also assembled a sufficient work force and management system to contract for more than one big project at a time and provide supervision at distant sites. The family included Joseph Conrad (1791-1873) and his sons, Peter (1815-1842), William (1817-1850), and John W. (1820-1878). In 1850, following the early deaths of Peter and William Conrad, the firm became Conrad and Williams with the addition of carpenter Williams. Further research is needed to learn more about the lives, roles, and relationships of the various members of the firm, the operation of their workshop, and which individuals worked on which projects.

Joseph Conrad, the patriarch of the family, began his career as a cabinetmaker in Philadelphia. According to family information, he was born on July 11, 1791, and married Mary Catherine Weaver on May 21, 1814, in the First Reformed Church in Philadelphia. He later wed Mary Nicholson on January 30, 1839, and then Elizabeth Nicholson (Mary’s sister) on October 26, 1841. He died on May 6, 1873.

Joseph and his family moved to North Carolina by 1820, when the census listed him living in Rowan County, a portion of which became Davidson County. According to an early history of Davidson County, while still in Philadelphia, “following his trade as cabinet maker,” Joseph Conrad received a large order for veneering picture frames and “put his wits to work” and produced a circular saw to complete the job, but he failed to patent it and “some other man got ahead of him . . . and made the fortune.” The same history credited Conrad with building a house in present Davidson County for W. B. Hamner, who was his son-in-law. In 1821 Joseph Conrad was appointed to serve as one of the justices of the peace to divide the eastern part of Rowan into the new county of Davidson, with Lexington as the county seat.

Joseph Conrad soon established himself in the new community of Lexington, where he purchased town lots and on August 20, 1821, advertised in the Salisbury Western Carolinian that his cabinet shop had mahogany furniture for sale. He was active in the new county’s government during the early 1820s, when the county erected the first Davidson County Courthouse from designs by William Nichols. Conrad probably made the acquaintance of the English-born architect during the project. In 1825 the county court appointed Conrad one of three commissioners to clear the yard around the new courthouse and to build a fence around the courthouse square. He also made the tables and storage presses for the new edifice. That same year he also served as a trustee for the Lexington Academy. Respected as a deeply religious man, he was responsible for building the brick First Presbyterian Church (1833) in Lexington.

He evidently prospered as a cabinetmaker, for in 1831 he opened a second shop in Salisbury—the county seat of Rowan County and an important regional political and trading center. The earliest known instance of Joseph Conrad working as a builder came in the 1830s, when he built the small, brick First Presbyterian Church in Lexington. One or more of his sons may have aided him in the construction. Joseph’s first wife was Catharine C. (1798-1837), according to Lexington city cemetery records. By 1850, Joseph Conrad of Davidson County, presumably the same man, was listed in the census as a carpenter aged 59, with property valued at $2,000. Described as a native of North Carolina (possibly he had gone to Philadelphia for training or employment?), he was head of a large household that included a younger wife—Elizabeth, aged 33—and children aged 14 down to 5 years old; his older children by his previous wife had already gone out on their own. Also in the household was Isaac Perryman, a 28-year-old cabinetmaker. By this time, Joseph Conrad’s sons were established artisans and were associated with their father on some projects.

The Conrads developed a reputation that reached beyond their local community. An important project for the family was one far from home, which drew upon the skills of the cabinetmaker’s trade. In 1841 the Conrads were employed to install the elaborate Gothic Revival fittings in the library of the newly completed, generally Greek Revival style, State Capitol in Raleigh. The woodwork had been planned by architect David Paton before he left the project in 1840. State expenditures for 1841 included $700 to “Conrad and Brothers, for putting up Stair Case, Gallery and shelves in Library Room,” and to other men for painting and plastering that room, plus “P. and W. Conrad” (Peter and William) for contract work done on the capitol. Years later, a writer to the Raleigh Star (January 24, 1849) complained that after bids were opened to finish the library and the supreme court’s courtroom at the State Capitol (the Gothic Revival rooms on the third floor) despite a bid from “old Mr. Briggs, one of the best workmen in this city” (John J. Briggs), the job had gone to “Governor Morehead’s up country carpenters”—the Conrads.

In 1842, Peter Conrad died, aged only 27, leaving an estate of numerous carpenter’s tools, a copy of a “Carpenter’s Guide,” a set of drawing tools, interest in three “coopering machines,” and part interest in a circular saw, which he co-owned with his brother, William. In 1843 Joseph and his son John W. Conrad evidently built an elaborate house for H. G. Hargrave, of a member of a prosperous local family related to the Conrads by marriage. The location of the H. G. Hargrave House is unknown, but in March 1844 the Conrads submitted an itemized bill to Hargrave of $1,293.48, which described an elaborate 2-story house with a conservatory, a front verandah with ornaments and a rear verandah with columns, sliding doors between parlors, “2 large inside arch columns and plinths,” six mantels, and 187 lights of “Gothic Sash.”

In the early 1840s, Joseph Conrad continued his connection with Governor John Motley Morehead of Greensboro. In 1843 Conrad was selected by Morehead to make a brass yard measure as part of the state’s official set of weights and measures. More important architecturally, Morehead contracted with Joseph and William Conrad to expand his house, Blandwood, from designs by architect Alexander Jackson Davis. Davis’s plan retained an older, frame house and added a front, stuccoed masonry section that transformed Blandwood into a symmetrical, towered, Italianate villa, one of the first of this popular type in America. The Conrads began work in May, 1844, and the Morehead family moved in by spring, 1846. At one point, Morehead wrote to Davis, encouraging the architect to visit Greensboro to see if the builders had constructed and finished the house as Davis had intended. For the Conrads, the successful completion of the governor’s modern residence from the designs of the leading New York architect was a major accomplishment and a feather in their cap.

Also in the spring of 1844, William and John W. Conrad submitted bids for building additions to two campus buildings, Old East and Old West, at the University of North Carolina in Chapel Hill, also from designs by Davis. Although university president David L. Swain met with the Conrads, the project went to other builders (Kendall B. Waitt and Isaac J. Collier, contractors, and Dabney Cosby, their masonry subcontractor).

From the completion of Blandwood in 1846 until January 1849, the Conrads’ activities are not yet known. Some evidence suggests that John W. and William Conrad were in Charlotte during some of this time. Meanwhile, another immense state project was in the works, and the Conrads’ patron Morehead was playing a major role in its development.

After lobbying by reformer Dorothea Dix, the state authorized construction of a large and up-to-date asylum, the North Carolina Hospital for the Insane, to be located just west of Raleigh. As chairman of the commissioners to build the asylum, Morehead encouraged architect A. J. Davis to visit the nation’s leading asylums in the North and in Virginia, and to consult with the nation’s leading expert on the subject, Philadelphia physician Thomas Story Kirkbride, before providing North Carolina with the plans for such a facility. Morehead may have influenced the choice of contractors as well, for the carpentry contract for the huge building—three stories tall and nearly 800 feet long—went to the brothers John W. and William Conrad in November 1850.

But the situation soon changed for the Conrads. Shortly after the brothers won the big hospital contract, William Conrad died late in 1850, the second of the Conrad sons to die young. After his brother William’s death, John W. Conrad engaged his father Joseph and another Davidson County builder, John Wilson Williams, as partners for the immense job. Little is known thus far of Williams, but his partnership with the Conrads continued for several years. During the 1850s the firm they formed was one of the premier contracting firms for major buildings in the central and western Piedmont. (See Conrad and Williams.)

After the mid-1850s, little is known of Joseph or John Williams. In 1857, the Greensboro Patriot reported that the stone for the new Davidson County Courthouse was being quarried on the land of Joseph Conrad north of Lexington. (The contractors for the building were William Ashley and George Dudley.) Meanwhile, John W. Conrad left North Carolina, as did many of his fellow Carolinians, for new prospects to the west. He married Demaris Jane Weatherly in Greensboro, NC, in 1856, and the couple soon moved to Tennessee and settled in Memphis, following her family’s previous move to Somerville, Tennessee. Conrad continued as a contractor and builder and was so listed in the censuses of 1860 and 1870; he owned substantial property in real estate and personal property. Among his best known works was the grandiose, towered Fayette County Courthouse (1875) in Somerville, Tennessee. During the 1878 Memphis yellow fever epidemic, John and Demaris fled Memphis, as did hundreds of others, in hopes of escaping the disease. By mid-August, they had joined other refugees in the reputedly healthful town of Somerville, where they stayed with her family. But John, along with other Memphis refugees, died in Somerville nevertheless, succumbing to the fever on October 3, not long after the September deaths of Demaris’s father and brother, William and James Weatherly.

When Joseph Conrad died in 1873, he left a large inventory of farming and carpentry tools, as well as equipment for a foundry. Among his possessions was “1 Architect” valued at 25 cents, and another “ditto,” which might have been the two-volume set of Ranlett’s book The Architect. He also owned mill shafts and other items suggesting that he and perhaps his partners were building grist or saw mills. Joseph’s heirs included his widow Elizabeth, his son John W. Conrad, Mrs. W. C. Hargrave, the heirs of Peter Conrad, the heirs of William Conrad, and Joseph Conrad, Jr., J. M. Conrad, E. H. Conrad, and Kate Hamner. Despite the relative paucity of documentation about their building operations, their role in design, or their relationships with their clients, clearly the Conrads and their associate Williams were among the most important builders working in the Piedmont in the antebellum era.