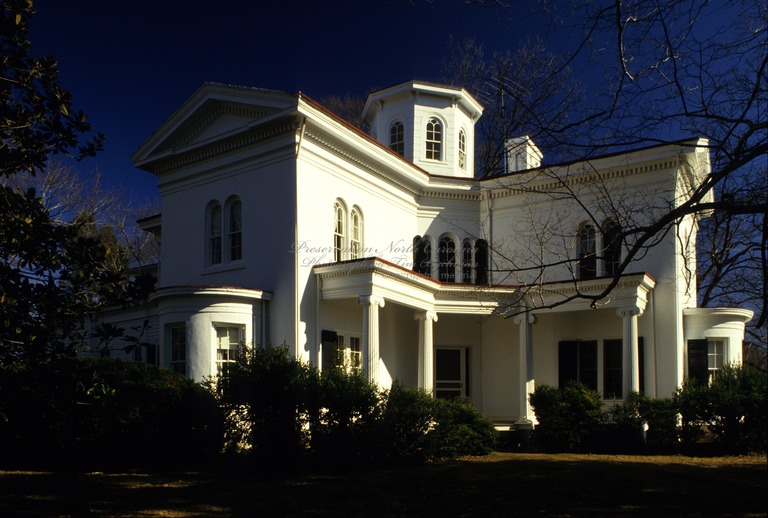 Conrad and Williams was a firm established in 1850 by John W. Conrad of the Conrad Family of builders and John Wilson Williams. It was founded to accomplish a major project and continued in business for several years. The firm, like the Conrad Family, constructed some of the most important and advanced buildings in the North Carolina Piedmont during the antebellum period.

The Conrad family included Joseph Conrad (1791-1873) and his sons, Peter (1815-1842), William (1817-1850), and John W. (1820-1878). In 1850 the Conrads, probably through their connections with Gov. John Motley Morehead on earlier projects, gained the contract to execute the carpentry work at the North Carolina Hospital for the Insane in Raleigh. But William died unexpectedly in 1850, and John W. Conrad took as partners to complete the immense project his father, Joseph, and John Wilson Williams, another Davidson County builder. The new firm was known as Conrad and Williams. Little is known of Williams. John W. Conrad and John Wilson Williams continued a productive partnership, perhaps sometimes including the father, Joseph, for several years.

The Conrads and Williams worked on the asylum job until its completion in 1856, supervising the installation of the windows, the flooring, the woodwork, and the large lantern on the roof of the central pavilion. John W. Conrad visited New York in September 1852 to consult with the hospital’s designer, Alexander Jackson Davis, about certain features, and Davis sent Conrad extra working drawings in March 1853.

With the asylum job under way, Conrad and Williams also took on other projects. Because the schedule of carpentry work depended on the progress of the masonry work, the carpenters were not on the job for the entire six years of construction on the asylum. In 1853, Governor William A. Graham was considering plans to expand his house, Montrose, near Hillsborough. Probably encouraged by his friend John Motley Morehead, Graham had negotiated with architect A. J. Davis, who had offered plans to transform the existing house into a romantic English mansion or an Italian villa.

But, as shown by John V. Allcott in his study of “Architectural Developments at ‘Montrose,’” Graham eventually decided otherwise. As recorded in an uncompleted and probably unsent letter to Davis, Graham had “submitted your plans to Mr. Conrad . . . . and Mr. Williams.” He found that Williams “seems at a loss as to the mode of joining the roof of the new to that of the old house on your plan, and both seemed desirous to have working drawings.” Conrad and Williams also estimated that the Davis design would be expensive to build. Graham gave up the stylish Davis proposals, explaining that he had decided on a simpler building more in keeping with the “exceeding plainness of the buildings of this town.” He contracted with Conrad to build additional rooms and verandahs; Conrad and Williams subcontracted with S. L. McKnight, a plasterer and mason who was also working on the asylum. The project proceeded slowly and payments to Conrad and Williams continued into 1855.

In the fall of 1853, Conrad and Williams also undertook one of their best known projects, construction of the large plantation villa in Davie County known as Cooleemee Plantation House. Built for planter Peter W. Hairston on a dramatic hilltop site overlooking the Yadkin River, Cooleemee followed a design for an “Anglo Grecian Villa” by architect William Ranlett, which was published in Ranlett’s book, The Architect (Vol. 1, 1849) and in Godey’s Lady’s Book in 1850. The stuccoed masonry house follows a cruciform plan, with wings radiating from a central hall that features a grand, curved stair and is lit by an octagonal lantern. Peter Hairston’s accounts show that the contract price with Conrad and Williams was $9,000, and that there were additional costs before the project was completed in November 1855. Williams is thought to have supervised the work, and much of the labor was done by Hairston slaves. One Hairston slave, Isam, worked on the project and gained training as a carpenter during the process. Interior woodwork was reportedly fashioned in Philadelphia.

More major projects followed during the 1850s, a period of ambitious construction in the Piedmont and elsewhere, concurrent with the work on the State Asylum in Raleigh. In the fall of 1854, John W. Conrad and John Wilson Williams, operating as Conrad and Williams, contracted to build an immense edifice designed by South Carolina architect Jacob Graves for the Concord Presbyterian Female College (now Mitchell College) in Statesville, for $25,000. The cornerstone for what is now the Mitchell College Main Building was laid on October 24, 1854, and by June 1855 the walls of the four-story building were nearly complete. On the night of June 9, 1855, a great windstorm blew down the walls. Conrad and Williams agreed to rebuild it for $19,000, but to only three stories and with a simpler design that substituted a Doric order for the original Corinthian order of the portico.

During the same decade, county seats in the western Piedmont vied for the finest new courthouses, all to be classical “temples of justice” and articles in local newspapers encouraged the competition. In Salisbury, Conrad and Williams built the new Rowan County Courthouse in the form of a temple in a massive Doric order. It may have been the builders’ own design, for the Salisbury Carolina Watchman reported on August 23, 1855, that “Messrs. Conrad and Williams of Raleigh, the contractors for the building of the courthouse, are erecting a magnificent structure which when completed will be another monument of their artistic skill and ingenuity as builders.”

Little else is known of Joseph Conrad or their partner John Wilson Williams. In 1857, as the courthouse building competition continued, the Greensboro Patriot reported that the stone for the new Davidson County Courthouse was being quarried on the land of Joseph Conrad north of Lexington. (The contractors for the building were William Ashley and George Dudley.) Joseph Conrad died in 1873. Meanwhile, John W. Conrad married Demaris Weatherly in Greensboro and moved with her to Memphis, where he continued his trade as a builder and contractor. He died in a yellow fever epidemic in 1878 (see Conrad Family).

John Wilson Williams’s death date is not yet known. Williams’s two sons, John Wilson Williams (known as Wilson Williams) and Ransom Williams, were also builders; Ransom Williams moved before 1860 to Alabama, where he designed and built educational buildings. Despite the relative paucity of documentation about their building operations, their role in design, or their relationships with their clients, clearly the Conrads and their associate Williams were among the most important builders working in the Piedmont in the antebellum era.