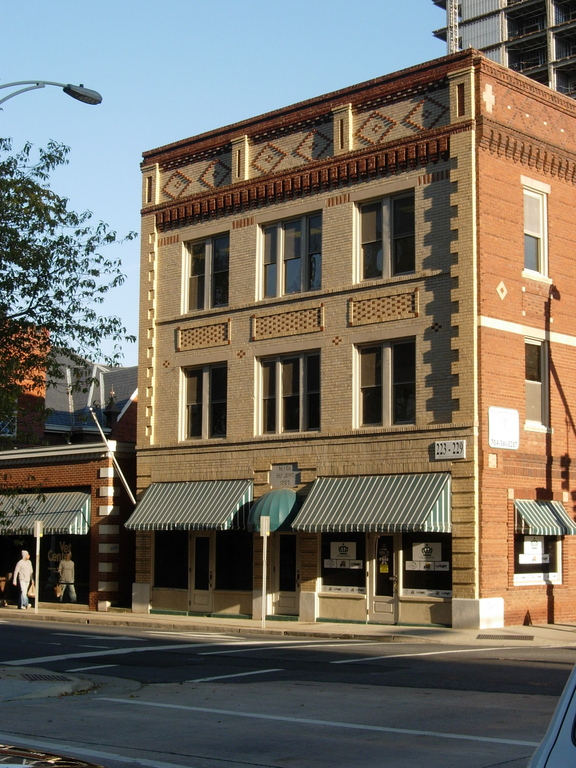 William W. Smith (1862-May 23, 1937) was a black brickmason and contractor who played a vital role in “Charlotte’s Negro business renaissance” of the early 20th century and is regarded as Charlotte’s first black architect. His known works concentrated in Charlotte’s black business and cultural center on South Brevard Street and at the A. M. E. Zion-sponsored Livingstone College in Salisbury.

William W. Smith was born in Mecklenburg County, the son of Robert C. Smith (1831-May 21, 1878?), and his obituary indicated that he resided in the county all of his life. He apprenticed with William H. Houser, an African American brickmason, builder, political leader, and owner of a brickmaking operation in Charlotte’s Second Ward.

By the turn of the 20th century, Smith had emerged as an active brickmason, contractor, and designer of buildings in Charlotte and the region around it and was regarded as a pioneer in the development of black businesses in the city. In 1900, he was listed in Charlotte in the U.S. census as W. W. Smith, a brick contractor, married for 23 years to Keziah Smith, a native of South Carolina, and he appeared regularly in the censuses thereafter.

Smith’s earliest known works as a builder date from the decade of the 1900s. He constructed the boldly composed Grace A. M. E. Zion Church (1900-1902), for which the prolific Charlotte firm of Hayden, Wheeler, and Schwend served as the architects. Smith and his wife Keziah E. Eggleston Smith (October 25, 1860-July 21, 1925) were founding members of the congregation. Grace A. M. E. Zion was established as a temperance congregation and counted among its members many of the wealthiest and most respected members of Charlotte’s predominantly black Brooklyn neighborhood. Just down the street from the church, Smith did the masonry work for North Carolina’s first public library founded for black citizens, the Brevard Street Branch of the Charlotte Public Library (1905; demolished).

Smith’s association with the African Methodist Episcopal Zion denomination, an important institution for the rising black middle class of the Carolinas, led to more commissions. The denomination’s Livingstone College, founded 1879 in Salisbury, North Carolina, was developing a handsome campus. The 1907-1908 Salisbury city directory listed Smith as “instructor of brickwork, Industrial Dept, Livingstone College,” an association that continued at least into the 1920s. He probably served as brickmason for Hood Theological Building (1906-1910). In 1911 he designed and built the 3-story, brick A. M. E. Zion Publishing House on Brevard Street in Charlotte, a key institution in the denomination and a centerpiece of the city’s economic life. In 1917 Smith provided plans for the massive Goler Hall dormitory at Livingstone College, where the cornerstone reads, “W. W. Smith, Designer and Builder.”

Smith’s designs also included commercial structures. He probably built the Afro-American Insurance Company buildings in Charlotte and Rock Hill, South Carolina, circa 1909, which display his characteristic polychrome brickwork. Smith’s last known design was the Mecklenburg Investment Company Building (1922), also on Brevard Street in Charlotte. Cooperatively funded by a group of black professionals, the 3-story brick building housed lodge rooms on the third floor, offices on the second, and storefronts on the first floor. It stands near Grace A. M. E. Zion Church. These two buildings survive as reminders of Charlotte’s important Brooklyn community and the African American main street that flourished at its heart along Brevard Street.

William W. Smith’s architectural vocabulary and enterprises evidently grew out of his early career as a brickmason, a frequent pattern among white and black builder-architects of the period. Characterizing his known work is his skillfully executed, elaborate, and vivid brickwork, featuring corbelling and often polychromy, highlighting the brickmason’s art. He especially liked mixing red and yellow brick, and plain and textured brick, to produce lively ornamental effects, which enriched his typically straightforward, rectilinear buildings. (The complex massing of Grace Church is an exception, possibly owing to the involvement of architect Wheeler and examples of other churches.) The interiors of Smith’s buildings typically featured windows finished with coved plaster surrounds rather than frames or sills, reflecting an emphasis on the work of the plasterer rather than the carpenter. He typically identified himself in the census as either a brickmason or a contractor, though some accounts describe him as an architect because of his role in designing buildings.

Smith died in 1937, a 75-year-old brickmason who had resided at 409 South Caldwell Street, and was buried in the family mausoleum in Charlotte’s Pinewood Cemetery, along with his father, his first wife, Keziah, and his sister, Mayme J. Smith Hargrove (1864-1927). The brick mausoleum, which he had built, takes the shape of a classical temple and presents a virtuoso display of Smith’s brickwork techniques. It features red and yellow brick, plain and textured brick, glazed white brick, marble, and locally produced cast-iron columns. Smith had no children. He was survived by his second wife, Mary, and his stepson Arthur Anderson, a longtime resident of Charlotte.

At William W. Smith’s death, Charlotte’s leading (white-owned) newspapers published brief acknowledgements of the passing of “a well-known negro citizen . . . a retired contractor and trustee of Grace Church.” The Star of Zion, the journal of the A. M. E. Zion denomination (published in the building Smith erected in Charlotte), carried a longer eulogy on May 27, 1937: “Mr. W. W. Smith is no more! He passed away Sunday, May 23rd at his home [at 409] South Caldwell Street. He was a great character, a useful member of the church and choir at Grace Church. He was in the first days of Charlotte’s Negro business renaissance, and with many other successful men opened up business to Charlotte Negroes in the last of the 19th century and the first of the 20th century. We shall miss him.”