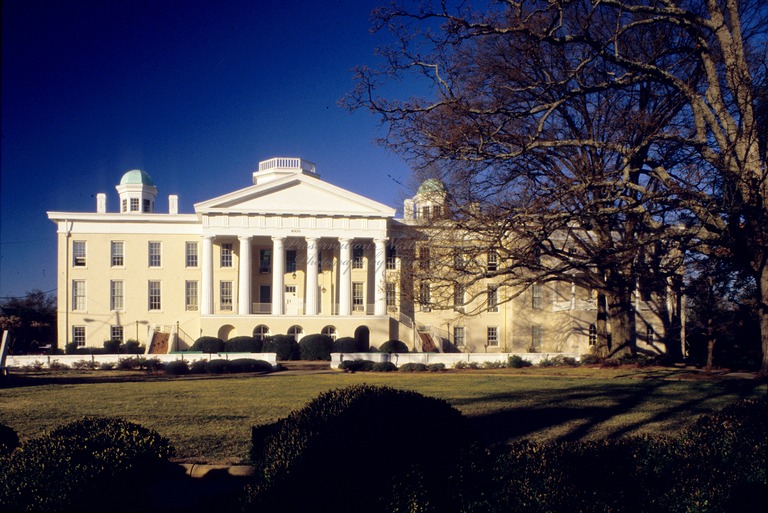 Jacob Graves (ca. 1808-1856) was an architect in Columbia, South Carolina, who planned at least two major antebellum college buildings in western North Carolina—Davenport College in Lenoir and Concord Female College (Mitchell College) in Statesville, during a period when many small denominational colleges were erecting large and stylish main buildings.

Little is known of Graves’s background or training. He is probably the Jacob Graves listed in the U.S. census in Lexington, South Carolina, as a civil engineer aged 42 and a native of New Hampshire. His wife, Susan, and their oldest son were also born in New Hampshire, but their younger children aged 10 to 5, were born in Massachusetts, indicating where the family had lived before coming to South Carolina. Graves evidently arrived in Columbia about 1850, and before his death (given by Mills B. Lane as 1856) he designed several buildings at the South Carolina College, now the University of South Carolina, including the monumental College Hall (now Longstreet Theater). By 1860, his widow Susan Graves and her children had moved back north to Massachusetts, where she was employed as a housekeeper.

Graves’s chief work in North Carolina is the main building of Concord Female College (now the Mitchell College Main Building). The saga of its construction has been traced by William C. Moose, based on trustees’ minutes and other records held by the college. The school was founded by the Presbyterians in 1853 to provide education for young women in western North Carolina as a complement to Davidson College (near Charlotte) for young men. A building committee was appointed, and decided to “ask for information in regard for building from Mr. Graves of South Carolina.” Graves went to Statesville in September, 1853, to present his plans to the trustees, and on January 25, 1854, according to the trustees’ minutes, the “drawings and specifications for a College Building by Mr. Graves” were “unanimously adopted.” A daguerreotype of a drawing of the “Female College, Statesville, N. C.” shows an imposing edifice, four stories tall with central Corinthian portico, and the roof topped by a large central cupola flanked by two smaller cupolas. The building committee advertised for bidders for construction, but only two proposals were received, both estimating the cost at $25,000, which was more than anticipated.

The contract went to John W. Conrad, of the noted regional building firm of Conrad and Williams. The cornerstone was laid on October 24, 1854, and by June 1855 the walls were nearly complete. On the night of June 9, 1855, however, the “magnificent structure” was “leveled to the ground by a violent gust of wind.” The college decided to persist, and on June 28 Conrad and Williams agreed to rebuild it for $19,000 with some amendments to the original design: the building was to be only three stories and to substitute a Doric order for the original Corinthian order of the portico. Although up to that time Graves had been serving as superintendent, the college decided (probably for economy) to dispense with his services and use J. W. Conrad in that role. This may have been a false economy, for in 1857, the building committee and Conrad came into conflict, when the committee held back payment, claiming that the workmanship of the building did not live up to the stated specifications. Conrad sued for his pay, and the case dragged on. In 1860 an arbitrator was chosen: William Murdoch, the respected Salisbury contractor and stonemason (and a Presbyterian). In 1861, the trustees authorized a final payment to Conrad. Meanwhile, in 1857, the college opened in the main building, which remains an imposing Greek Revival landmark of Statesville to the present.

Concurrently with the Statesville project, Graves traveled to the small county seat community of Lenoir to plan the main building for Davenport College Main Building for the Methodist-sponsored school for young women in western North Carolina. Similar to the Statesville building but smaller, the 2-story, brick edifice featured a portico of Corinthian columns and was topped by a large octagonal cupola. The contractors were local builders Azor Shell and Uriah Cloyd (see Shell and Cloyd). The diary of James Clarence Harper, a prominent local man involved in the building committee, tracked the events of its construction. On April 2, 1855, Harper went to Lenoir and reported that the building committee of the college had met “Mr. Graves, the architect” and made arrangements to obtain plans. That June 10, he reported that the storm had blown down the college building at Statesville. On July 27, 1855, Harper went to Lenoir again and met the building committee for the college and “gave Uriah Cloyd the contract of building at $9,350.” Davenport opened in the new building in 1858. The building burned in 1877, was rebuilt within the old walls, and subsequently altered over the years before being demolished.