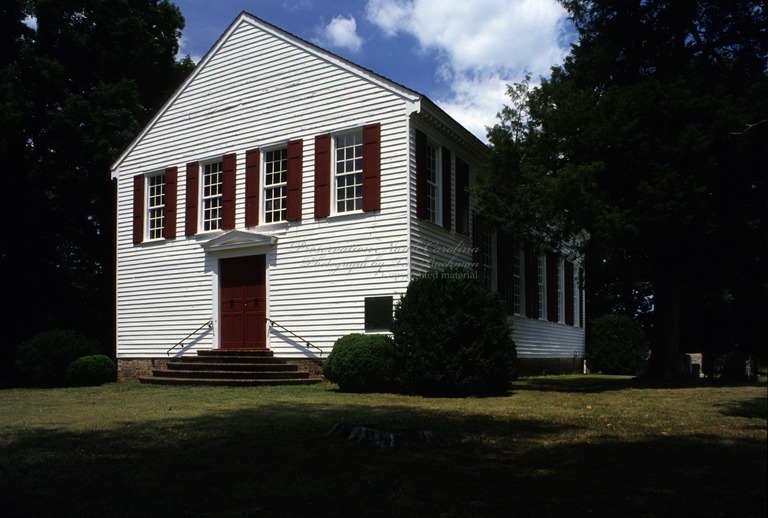 John Lynch (fl. 1760s-1800) was a carpenter in Virginia and North Carolina, known in North Carolina as the builder of St. John’s Episcopal Church (1771-1774) in present Vance County, the only surviving colonial church in the North Carolina Piedmont.

A resident of Mecklenburg County, Virginia, and later Surry County, North Carolina (both adjoining the line between the two colonies), Lynch may have been a native of Canterbury, England. In the 1760s and 1770s he took a number of apprentices to the carpenter’s trade in Mecklenburg County, where he maintained a house and a joiner’s shop. He built the county jail in 1765, and was licensed to keep an ordinary in 1774. He is cited in Susan Bracey’s history of Mecklenburg County as its best-known early carpenter.

In 1771, John Lynch contracted with the vestry of Granville Parish in North Carolina to build a framed church in the Nutbush section of Granville County, which lay only a few miles south of Lynch’s home in Mecklenburg County. (This part of Granville County later became Vance County.) The cost was to be £767, 13 shillings, 11 pence, proclamation money.

The agreement called for John “Linch” of Mecklenburg County to build a church “at or near saint Peters Church at Nutbush” on a specified site. Lynch was to receive staged payments in August of 1772, 1773, and 1774. The building was supposed to be completed by December 1773, and it was probably nearing completion when Lynch marked his name and the date August 28, 1773, in the mortar of the brick foundation

The contract’s specifications are among the most detailed for a colonial building in North Carolina and show that whoever prepared them was well acquainted with construction methods. Some writers have speculated that the church might have been designed by John Hawks, architect of Tryon Palace, who evidently planned the colonial St. Matthew’s Church in Hillsborough, but there is no evidence of Hawks’s role.

The specifications described each component of the frame structure, which was to measure 60 by 34 feet, with an 18-foot pitch. It was to have a modillion cornice and “elegant and convenient” doors and windows. Inside, the single large room was to have a curved ceiling, paneled pews, and “elegant” turned posts upholding the rear gallery. The specifications spelled out such items as the size of the timbers, the framing members of the roof to follow the “Rules of Architecture in framing a Cove Arch or Concave roof”, the size and type of glass and nails, the size and shape of the wooden shingles, and the finishing of the weatherboards and door and window frames. (The weatherboards were to be “featheredged plank well lapt plained & struck with a 1/4 round,” and the door and window “shall be worked out of the Sollid with good Nose sills.”) The document also specified the design of the pews, the pulpit, and the “sound” (sounding board) above the pulpit, and the paint colors to be used inside (white washed plaster walls, cream color woodwork) and out (stone color walls, Spanish brown roof). In every respect, the wording describes the characteristics of first-rate handcrafted carpentry of the time and place.

Other work by Lynch has yet to be identified, but the quality of craftsmanship at the church indicates that he was capable of excellent building. In 1775 he was paid for work on an unspecified building from the estate of Philip Taylor of Granville County.

On the eve of the American Revolution, Lynch became a property owner in northern North Carolina. In 1775, he was living in Surry County, North Carolina, where he acquired over 1,000 acres of land not far south of Virginia. A tax list of 1777 showed him as one of the largest landowners in the county, with property valued at £888. In May of 1781, he obtained permission to erect a water-powered grist and saw mill on his land by Stewart’s Creek. In 1786 he obtained a license to operate a tavern. He married Patience Glen in 1788; he had evidently been married before, for his son John Lynch, Jr., was also living in the county. The couple gained a license to operate a tavern “at his new Dwelling house” in 1789. In 1798, Lynch gave his friend Robert Williams, Jr., power of attorney to sell or lease his property in Canterbury, “in the county of Kent in the Kingdom of England.” Two years later, in his will of May 11, 1800, Lynch bequeathed to his wife a 2-acre tract at the fork of the road to Bethany (Bethania?) and Salem, probably his tavern site, identified as being 3 miles from where he was living. At his estate sale the following September, his widow purchased most of his small estate of household items valued at less than five pounds.