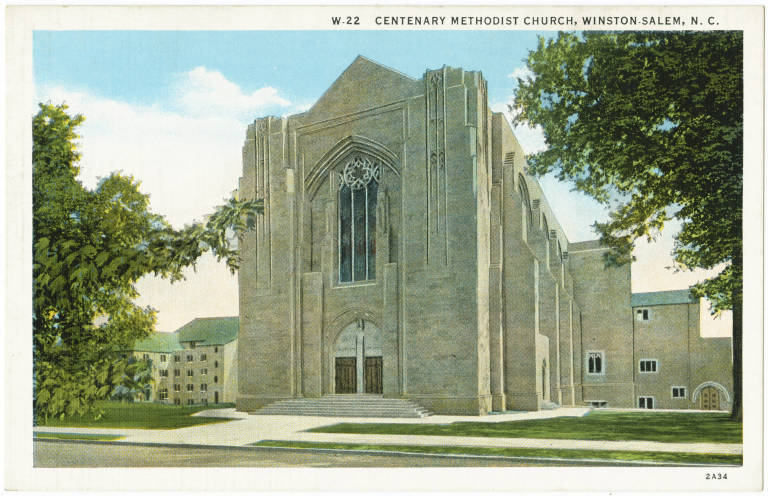 Mayers Murray and Phillip, a major architectural firm in New York City in the early to mid-20th century, designed several prestigious projects in New York, Chicago, and elsewhere, including the 1929 Church of the Heavenly Rest in Manhattan. The principals were Francis L. Mayers, O. H. Murray, and Hardie Phillip, who had been senior members in the architectural firm of Bertram Grosvenor Goodhue, Associates. After Goodhue’s death in 1924, they reorganized the firm but continued the name until 1931 when they changed it to their own. The firm dissolved in 1940. In many of their works they were influenced by Goodhue’s sophisticated Gothic Revival and English-influenced style. The firm designed two major buildings in Winston-Salem, N. C., both planned shortly before the Great Depression but completed during its early years: Centenary United Methodist Church (1928-1931) and the James R. and Diana M. Dyer House (1929-1931). The two projects spanned the transition in the firm’s name. The latter name, used when the buildings were completed, is employed herein. Hardie Phillip is believed to have been the lead architect for these projects.

During the 1910s and 1920s, the wealth generated by Winston-Salem’s tobacco and textile industries made the city the richest in the state and supported a remarkable collection of ambitious architecture, including works designed by nationally active architects. The most dramatic such commission was the R. J. Reynolds Building (1927-1929), a ziggurat form Art Deco skyscraper by Shreve and Lambof New York, who would go on to design the Empire State Building. St. Paul’s Episcopal Church (1928-1929) designed by Ralph Adams Cram, a former associate of Bernard Goodhue, was completed on the eve of the Depression.

Although Winston-Salem like other cities suffered from the Crash of 1929 and the Great Depression, in contrast to many communities where projects were halted, the Twin Cities’ leaders’ fortunes and especially the highly profitable cigarette industry enabled some planned projects to continue (see Northup and O’Brien and Luther Lashmit’s Graylyn, built for Bowman Gray, president of the R. J. Reynolds Tobacco Company and his wife Natalie in 1927-1932).

Centenary United Methodist Church, said to have cost $1.25 million, was erected downtown for a newly conjoined congregation of two earlier Methodist congregations. Many of the leading business and industrial families in the city were Methodists. An article in a 1928 newspaper reported that the congregation had selected the firm, which was then operating as Bertram Grosvenor Goodhue Associates, to design the new church. The land was donated by the Gray family, and the church was completed in 1931 with financial assistance from the Hanes textile family and other donors. A massive and stylized Gothic Revival edifice of Indiana limestone with a stunning, soaring nave, it has been compared with the firm’s Church of the Heavenly Rest in New York.

The Dyer House in the Reynolda Park suburb near the Reynoldses’ Reynolda Estate (see Charles Barton Keen) employs rich-hued variegated stone in a residence inspired by English manor houses, one of several Anglophilic residences in Winston-Salem’s leading suburbs. It was designed for James Ballard and Diana Mauzy Dyer, natives of Virginia who had moved to Winston-Salem years before, where James had a long career with the R. J. Reynolds Tobacco Company. The Dyers selected the New York architectural firm, then still operating under the Goodhue name, which was already known in Winston-Salem for the design of Centenary Methodist Church; several of the Dyers’ friends were members of that congregation. The firm began designing the house before James Dyer’s death in August, 1929, and his widow completed their plans to build the house for herself and their children. The final book of specifications (1931) had the firm’s name as Mayers, Murray and Phillip. The house was completed in December 1931, as indicated by a ledgerfrom Fogle Brothers, the town’s leading contractors for many years.