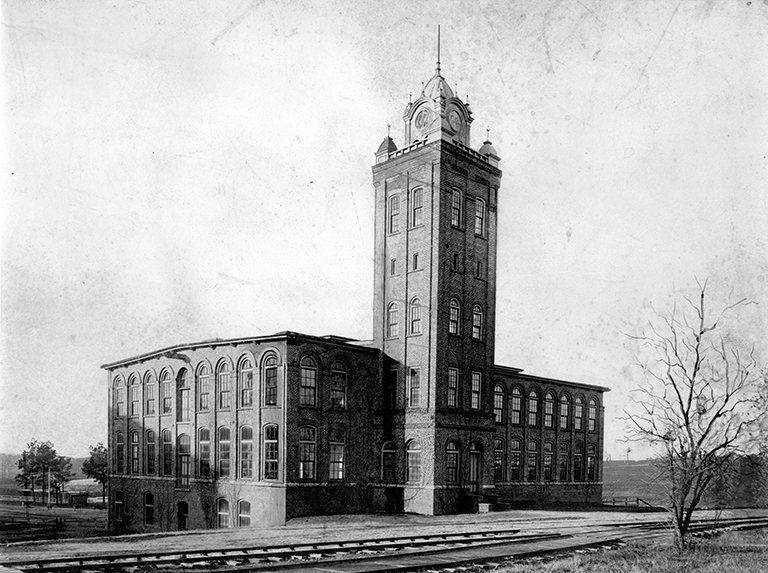 Daniel Augustus Tompkins (1851-1914), born on a plantation in Edgefield County, South Carolina, epitomized the energetic men who began their lives in the Old South and transformed their careers and their region as New South entrepreneurs. As a designer, builder, and promoter of textile mills headquartered in Charlotte, North Carolina, Tompkins had a broad and profound impact on the industrial and economic development of the Upper South and especially the Piedmont Carolinas. Like many other southern industrialists, he gained expertise in the North and abroad and put it to work in his native South. He planned or developed scores of textile mills and related structures, many of which survive. The building list here represents only a sampling of his works.

Daniel Augustus Tompkins was born in Edgefield County, SC, to DeWitt Clinton and Hannah Virginia Smyly Tompkins. As related by Brenda Mark Eagles in the Dictionary of North Carolina Biography, he studied at Edgefield Academy, entered the University of South Carolina in 1867, and in 1869 transferred to the Rensselaer Polytechnic Institute in Troy, N.Y., where he earned a degree in civil engineering in 1873. He gained valuable experience by working for New York steel manufacturers and for the Bethlehem Iron Works in Pennsylvania. After Tompkins had worked for John Fritz at Bethlehem Iron Works for five years and become a master machinist, Fritz arranged for him to work in Germany at the Schwerte Iron Works. After returning to the United States in 1879, Tompkins was employed again at Bethlehem Iron Works, and then as a master machinist for the Crystal Plate Glass Company in Crystal City, Missouri.

In 1883, the widely experienced and ambitious engineer went to Charlotte, which he made his permanent home, joining a city then rapidly developing into a mecca for New South entrepreneurs who hoped to capitalize on its multiple rail connections and opportunities for ambitious and hardworking individuals. He began as an agent for the Westinghouse Machine Company to install steam engines in the Carolinas, including one for Fred Oliver’s cottonseed oil mill. Early on, he saw the potential for production of oil from cotton seeds—long considered a nuisance in the cotton business—and did much to develop that industry. Within a short time, Tompkins and Oliver founded their own company.

Initially an agent for out-of-state machinery manufacturers, Tompkins identified himself variously as an engineer, machinist, and contractor. By the late 1880s the D. A. Tompkins Company had expanded operations to the construction of various types of manufacturing and power plants. Among the first mills his company erected in Charlotte were the Alpha (Alpha-Orient Mill), Ada, and Victor mills in 1888-1889, which were the city’s second, third, and fourth mills. By 1910 the organization had developed 250 cotton oil mills, 150 electric plants, and 100 cotton plants. Among his best-known surviving projects are those in Charlotte and environs.

His company also planned and built mill villages and various types of mill workers’ houses. Providing housing for textile mill workers was necessary to attract and maintain a work force at the often remote water-powered mill sites, as well as serving the paternalistic system to control the workers and their families. Mill villages developed at both water-powered rural sites and, in time, near the steam-powered mills that stood alongside rail lines and in urban settings including the area around Charlotte, which became the heart of the piedmont Carolinas’ textile mill region.

Rapidly becoming a leader in his field, Tompkins served on the U. S. Industrial Commission, was a member of the Board of Trustees at what became North Carolina State University, and led in the development of the college’s textile school. He planned the building now known as Tompkins Hall as a functioning mill to enable students to learn the textile business first hand. (The original building is pictured here.)

Endlessly promoting industrial development Tompkins wrote many articles in the Manufacturers’ Record and wrote several books on the textile industry and local history. An energetic writer and publisher, Tompkins obtained controlling interest in local newspapers including the Charlotte Observer in order to promote his industrial policies. It was during this period that the center of textile manufacturing shifted from New England to the South, with its abundance of cheap labor and proximity to the cotton fields as well as the network of railroads. Sharing the views of many of his contemporaries in the textile and other industries who sought to maximize profits and retain cheap labor, he used these and other outlets to oppose compulsory public schooling, child labor legislation, and wage regulation. In 1911, as Eagles relates, Clark Howell of the Atlanta Constitution wrote of Tompkins, “He perhaps has done more to stimulate the cotton mill development of the South than any other man.”

Especially influential was his book, Cotton Mill: Commercial Features of 1899 (http://docsouth.unc.edu/nc/tompkins/tompkins.html), which described and illustrated with plans and photographs mill workers’ house types then in common use. Tompkins stated in that publication, based on his experience in both rural and urban settings, “The whole matter of providing attractive and comfortable habitations for cotton operatives [is] summarized in the statement that they are essentially a rural people. . . .While their condition is in most cases decidedly bettered by going to the factory, the old instincts cling to them.” Most of the workers’ dwellings he illustrated were one-story frame structures with 3 to 5 rooms, depending on the number of family members working at the mill. He also recommended providing open space and room for a garden. Examples of the house types Tompkins promoted appear in various mill villages. These include several in and near Charlotte, such as those in the Mecklenburg Mill village on Warp and Card Streets; and others in Burlington and the village of Haw River, both in Alamance County.

Tompkins retired in 1910 and died on October 18, 1914. He never married after the death of his fiancée in 1884 and left no children. He is buried at Elmwood Cemetery in Charlotte. Collections of his extensive papers are held by the Southern Historical Collection (UNC, Chapel Hill), Duke University Library, and the Charlotte-Mecklenburg Public Library. Further research is needed on his involvement in specific manufacturing plants and to determine their locations and current status. Information documenting additional factories and other plants as his work is sought.