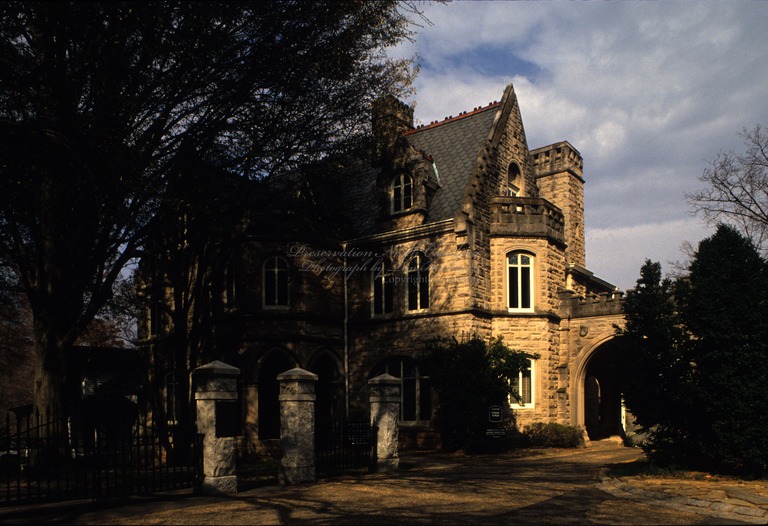 Max Schroff (ca. 1845-1922), a German-born architect active in late 19th century New York City, designed one notable building in North Carolina—the unique stone residence called Cedarhyrst in the old Moravian town of Salem. It is one of the few surviving examples of the grand residences of late 19th century Winston and Salem (joined as Winston-Salem in 1913), when prosperous clients employed a variety of urban architects to design their ornate and substantial homes, of which many were constructed by the local contractors, Fogle Brothers. It is also locally exceptional in its references to medieval Germanic architecture.

Dr. Nathaniel Siewers, a Moravian and native of Salem, had studied medicine in Germany and was attracted to German romantic nationalism including architecture. Returning to Salem to practice medicine, he added another layer of Germanic culture to the community with its Germanic roots by commissioning New York architect Schroff to design his stone mansion with medieval castellated motifs, plus inspiring mottoes in German script such as “Strongly built, trusting in God” on the outer stone wall, and “make us well” in stained glass over his doctor’s office.

The New York World of May 30, 1893, reported that “Max Schroff, of this city, is the architect of a handsome manor house, which Dr. N. S. Sreivers [sic] will build in Salem Winston [sic], N. C. It will be in Rhenish mediaeval style and elaborate in detail. It is to be four stories high and 60 by 80 feet. The interior will be finished in yellow oak throughout.” Providing jobs during a national financial crisis, the project attracted local attention: the Western Sentinel of November 16, 1893 opined, “Few towns can boast, especially during a dull year, the building of such a beautiful and costly residence as that of Dr. N. S. Sieweres in Salem. It will be one of the handsomest dwellings in the South.” The same newspaper listed on November 23, 1893, the largest building projects of the year, placing that of Dr. N. S. Siewers, which cost $40,000, near the top of the list, after the city hall, a factory, and a hotel, and far exceeding any other residences.

How Dr. Siewers selected Schroff is not known, but he found an architect well suited to achieve his romantic vision. Years earlier, an article in American Architect and Architecture, Vol. 9, p. 30 (1881) described an illustration of the Castle Lichtenstein drawn by Max Schroff, Architect, New York. The castle had been designed for a royal client by a “renowned professor of architecture, Charles Hedeloff, one of the preservers of round and pointed Gothic (the old German style).”

Max Schroff appeared in New York directories from the late 1870s onward, and for many years resided in Brooklyn. In 1892, the New York state census added his age, 44, and his place of birth, Germany. The United States Census of 1900 gave his birth date as August 1846 and stated that he had immigrated in 1849. His wife, Louisa, was a native of New York born to German-born parents. Schroff was active in New York for several years, and a number of substantial and ornate buildings are credited to him. Whether he planned any others with such a distinctive German character is not known. The Germanic mansion he planned in the old town of Salem stands as a beloved landmark that extends the story of Germanic architecture in the community.