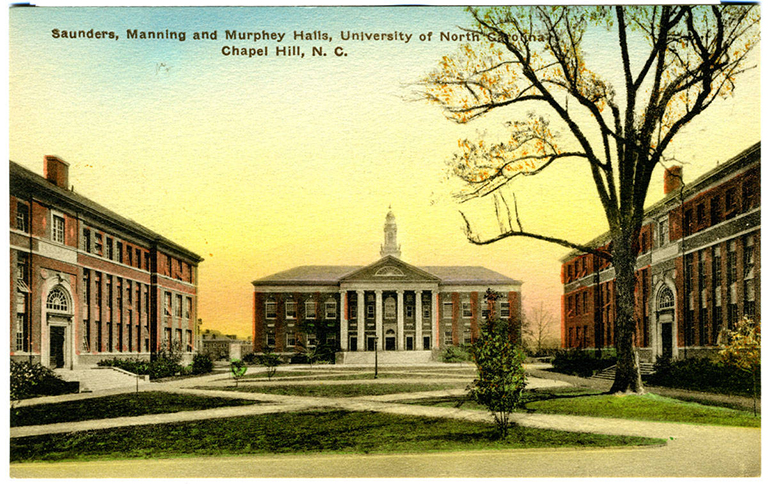 H. P. (Hardman Philips) Alan Montgomery (Aug. 26, 1873-July 6, 1936) of New York was an architect briefly affiliated with the T. C. Atwood Organization (see Thomas C. Atwood) during the early 1920s phase of expansion of the University of North Carolina at Chapel Hill under the auspices of consulting architects McKim, Mead and White of New York.

According to his obituary in the Millbrook, New York Millbrook Round Table, July 10, 1936, Montgomery was born in Rhinebeck, New York, the son of Rev. Dr. Henry E. Montgomery, an Episcopal minister, and Margaret Augusta Lynch Montgomery. He was educated at the Tivoli Military Academy, Columbia University, and the General Theological Seminary as well as studying in Europe. For several years he practiced as an architect. He served as a first lieutenant in the infantry during World War I. In 1918, following in his father’s footsteps, he was ordained to the Episcopal priesthood.

It was probably through McKim, Mead and White’s New York connections that Montgomery was employed as architect by the T. C. Atwood Organization for the expansion of the University of North Carolina. The large, multi-year construction project involved several actors including the university building committee, which employed the Atwood organization to oversee the project on its behalf. The Atwood organization in turn in turn affiliated with individual architects (likely recommended by McKim, Mead and White) who became part of the Atwood organization. On May 9, 1921, as reported in the Charlotte News that day, university president H. W. Chase announced, “the architectural work on the $1,490,000 building program will be under the direction of H. P. Alan Montgomery, of New York.” Montgomery had arrived in Chapel Hill and planned to be there “continually until the work is finished. He becomes part of the organization of Thomas C. Atwood, supervising engineer and executive agent of the building committee.” Offices for both Atwood and Montgomery were located in the Alumni Building.

The university Alumni Review of June, 1921 noted that a contract for $1.1 million in construction had been let to T. C. Thompson and Company of Charlotte; a large force of state convict laborers was building a railroad track to the campus; extensive building materials had been acquired; and Montgomery, “full-time architect and member of the Atwood organization,” was in Chapel Hill “with a force of draughtsmen” and had plans for the buildings “well advanced.” He was cited as having had “wide experience in and around New York” and a “reputation for beautiful and satisfactory work.”

According to Archibald Henderson’s The Campus of the First State University. Montgomery was involved in designing Ruffin, Mangum, Manly, and Grimes dormitories and Saunders, Murphey, Manning, and Bingham halls. (For Manning Hall of 1923, Henderson cites both Montgomery and Nash as architects.) All of these display restrained and functional versions of the red brick “Colonial” style that had been adopted as the best architectural mode to assure that the new areas of the campus harmonized with the older ones. T. C. Thompson served as contractor for these and other campus buildings of the period.

In April 1922, Arthur C. Nash, also of New York, replaced Montgomery as architect for the T. C. Atwood Organization. The reasons for the transition from Montgomery to Nash are not established. In any case, by autumn, Montgomery was back in New York, following his calling as an Episcopal priest. He served at St. Ann’s in Brooklyn in the 1920s and for many years as rector of Grace Emanuel Protestant Church in New York City. He died at the home of his sister, Mrs. Woodbury G. Langdon, in Rhinebeck and was buried in the Rhinebeck Cemetery. His residence was at 14 Sutton Place, South and he left a widow, Helen Montgomery.