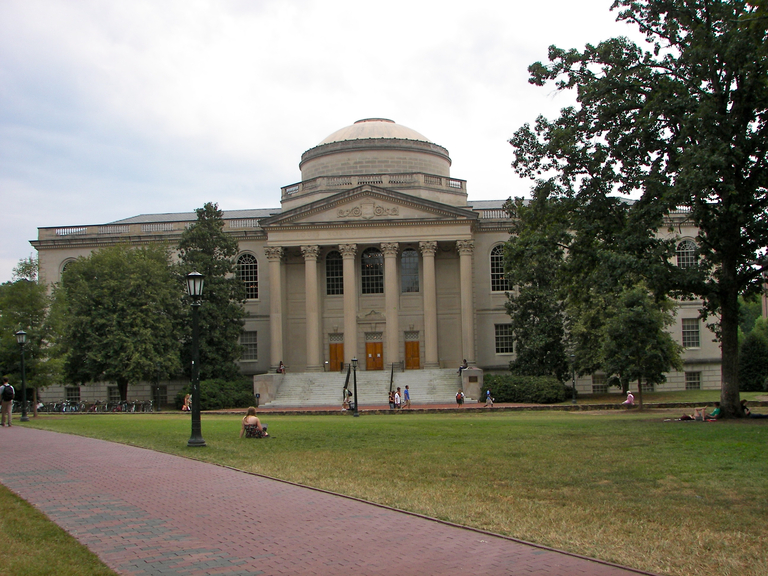 The nationally renowned New York architectural firm of McKim, Mead and White had an influential role in North Carolina both directly and indirectly. Most notably, as consulting architects for the University of North Carolina the firm employed Beaux-Arts classical principles in defining the early twentieth century campus expansion with their on-site architects being William Kendall, H. P. Alan Montgomery and Arthur C. Nash. Earlier on, Stanford White, one of the original partners in the firm, provided plans for industrial development at Roanoke Rapids. As well, these and other architects active in the state such as Henry Bacon, Jr., and Charles C. Hartmann gained experience and expertise while working for the firm which they carried forward in their careers.

The firm was founded in 1879 by partners Charles Follen McKim (1847-1909), William Rutherford Mead (1846-1929), and Stanford White (1853-1906). Expert in the principles of Beaux Arts architecture and planning, they took a major role in directing American taste away from the exuberant eclecticism of the post-Civil War era toward a more ordered, formal, and hierarchical approach to both city planning and architecture as defined the Ecole des Beaux Arts in Paris. They were well known nationally for their shingled country house and resort architecture and for such monumental works as the Boston Public Library, Madison Square Garden, and Columbia University. Especially influential was their role in planning the Beaux Arts “White City” visited by millions at the Chicago World’s Fair of 1893, which spurred the popular acceptance of the City Beautiful movement and the renewal of classical architecture. The firm, which included numerous architects, continued under the same name after the deaths of the founding principals. A little-known and early project in the state involved the creation of the industrial town of Roanoke Rapids in northeastern North Carolina. It was one of three industrial towns planned by the firm in the late 1800s, the others being at Niagara Falls, New York, and Naugatuck, Connecticut. The story is told that one of the investors in the mill development to exploit the mighty water power of the Roanoke River—an eccentric man and heir to the Astor estate named John Armstrong Chanler (Chaloner)—commissioned his friend Stanford White of McKim, Mead and White, to design a knitting mill and possibly another manufacturing plant, a church, a hotel, and about 50 houses. Evidently local builders executed the drawings without supervision from the New York firm. Most of the buildings are long gone. Portions of the mill are said to survive within a paper mill that stands by the river, and local tradition asserts that a few small houses with a gambrel roof shape locally called “turtle-back” houses date from the Stanford White era, but this is not documented.

Far better known and more important is the firm’s central role in defining the expansion of the University of North Carolina after World War I. In 1920, the University of North Carolina embarked a multi-million dollar expansion program based generally on a plan proposed in 1917 by urban planner John Nolen, to extend the campus by creating a second quad southward beyond South Building. Under the leadership of President Harry Chase, the university hired McKim, Mead and White as consulting architects to develop Nolen’s plan more fully. (See also James A. Salter.)

The resulting multi-year project was a vast and complex enterprise that involved an immense work force, many technical challenges, and numerous architects. By this time, two of the founding principals at McKim, Mead and White had died, and other architects were operating the firm. The Aberthaw engineering firm of Atlanta was employed to advise as well. The T. C. Atwood Organization, engineers, of North Carolina was commissioned to design specific buildings with McKim, Mead and White as consulting architects. Key figures in the multi-year project were architects H. P. Alan Montgomery; Arthur C. Nash (who formed an association with Atwood in 1922); and William Kendall of McKim, Mead and White. According to Henderson, The Campus of the First University), during McKim, Mead and White’s “regime as ‘consulting architects,’: the official architects for T.C. Atwood, engineer, were H. P. Alan Montgomery (for Ruffin, Mangum, Manly, and Grimes dormitories, and Saunders, Murphey, Manning, and Bingham halls) and Arthur C. Nash for Venable Hall, Aycock, Graham, Everett, Lewis, and Stacy dormitories, Spencer Hall (women’s dormitory), Graham Memorial, and the Library. Additional buildings were planned in similar spirit by these and other architects.

To create the south quadrangle as a grand and inviting Beaux-Arts ensemble, the architects added a monumental portico to the south face of South Building and framed the south quadrangle and its cross-axial secondary quadrangles with red brick edifices in a “colonial” style they saw as complementing the older buildings on campus. At the south end of the new quadrangle they designed the monumental, neoclassical Louis Round Wilson Library (1929)—planned by Arthur Nash and William Kendall of the McKim, Mead and White office—as a contrasting domed edifice in pale Indiana limestone that echoes McKim, Mead and White’s celebrated Low Library at Columbia University in New York. The firm’s last project at the university before a hiatus in construction during the Great Depression was the Venetian-inspired campanile, the Morehead-Patterson Bell Tower (1930-1931), built on axis south of the library with a donation from benefactors John Motley Morehead III and Rufus Lenoir Patterson. . The Beaux-Arts classical tradition prominently modeled by McKim, Mead and White flourished in the state, including numerous buildings designed by Arthur Nash alone and by Atwood and Nash, as well as by Henry Bacon, Charles C. Hartmann, and others influenced by the firm.