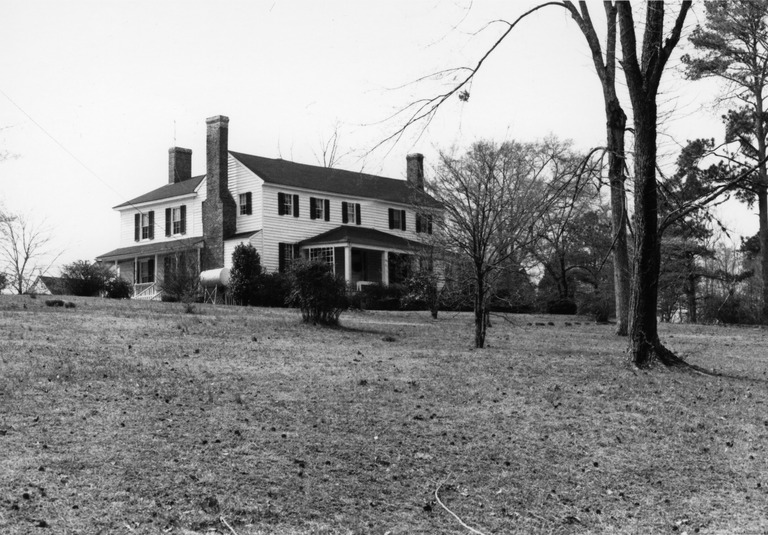 Gilbert Leigh (d. 1792 or 1793), house carpenter and joiner, was one of the leading local artisans in a period of high quality building in Edenton and environs. He is one of the few North Carolina house carpenters of his generation for whom specific buildings have been documented or attributed.

A native of Perquimans County, Leigh moved to Edenton by 1756. He bought two town lots (120 and 126 West Queen Street) in that year, and by 1759 he had built a small, neatly finished house on each lot—the Leigh-Hathaway House and the Leigh-Bush House. Like his fellow Edenton craftsman John Green, Leigh took on several minor public construction projects: work on a public warehouse in 1757; renovation of the Council Chamber (apparently a separate building from the courthouse) in 1758; and various repairs to the county jail and the old Chowan County Courthouse, which was in bad condition by the 1760s.

Local tradition has linked Leigh’s name (see Frances Benjamin Johnston and Thomas Tileston Waterman, The Early Architecture of North Carolina [1941]) with construction of the Georgian-style Chowan County Courthouse in the late 1760s, but there is no documentation of his role—or anyone else’s. An advertisement in the Virginia Gazette of June 4, 1767, sought bids for building “a brick Court-House 68 ft. by 45,” for which the trustees already had a plan in hand. Despite record searches by Marc Brodsky and Elizabeth Vann Moore, no documentation of the builders of the courthouse has been found; attribution of its design to John Hawks, architect of Tryon Palace, is based only on stylistic and circumstantial evidence.

Gilbert Leigh was paid for some tasks related to the courthouse, which were likely outside the scope of the main contract. In June 1768 the court ordered that “benches be made by Mr. Gilbert Leigh near the Court House Table for the Conveniency of the Attorneys and Grand and Petit Jurors,” to be paid for by the county sheriff. In 1770 carpenters Leigh and John Green submitted a bill for the substantial sum of £15 5 shillings 1 pence for work on the clerk’s office; it included £8 for a bookpress (bookcase) for the clerk’s office, £3 for another corner bookpress, and smaller sums for planks and hardware. Leigh also did additional work on cupboards, bookcases, etc., in 1770 and 1771. It is a matter of speculation as to whether these items point to his involvement in the principal construction.

Leigh’s best documented project is a plantation house built in 1786 for Stevens Gray, a member of a long established planter family. The small frame house is part of the enlarged residence now called Rosefield which stands near Windsor, a few miles west of Edenton. Family papers provide unusually full information for construction of a dwelling of its time and place. On May 1, 1786, Gray and Leigh signed an agreement for

a house 28 by 18 the Bording to be plan’d, With 6 Windows [of] 8 Lights, 8 Do [ditto] 15 Do, 5 Doors, the floors to be Toung & Grove, the windows & Doors frames with out to be Single Archives [architraves] & with in the Lower Room to be Double with Scirten [skirting?] & Cheer Boards Round the Rooms, a Box Cornice outside, 1 pair Stares, the above articles to be done in a good work man like manner what belongs to a Carpenter & Joiner. The above sd House Mr. Gilbert Leigh is to build for Stevens Gray and the sd Gray is to pay him one hundred & fifteen pounds and if the said money should grow worse to make it as good as Dollars at 10/ & five Gallons West Indian Rum. (Gray Family Papers, Southern Historical Collection)

The description indicates that the house was of frame, neatly but not elaborately finished, and 1 1/2 or 2 stories tall (requiring a “pair” of stairs, meaning one staircase), possibly with a side-passage plan akin to Leigh’s Edenton house. Five doors may imply a front door, a back door, two doors from the passage into adjoining rooms, and a door between two upstairs rooms. Tongue and groove floors made the rooms tight. The interior walls were to be nicely finished with skirting and chair boards (baseboards and chair rails today). Molded architraves surrounded the doors and windows, with the status of the main room distinguished by a double molding. The 8-light sash (4 panes over 4) probably lighted the upstairs rooms, and the larger ones, probably containing 9 panes over 6, lit the main story. The reference to the money growing worse reflects the fact that at this time, the value of currency in North Carolina was unstable and inflated. Leigh also signed a receipt dated April 28, 1786, acknowledging that Gray had paid him “the sum of Eighteen pounds in part pay for a House that I am to build for him.” Typical of the era, Leigh’s contract was for his workmanship only: Gray acquired most if not all of the building materials separately, paying other men for a bill of timber that included framing components, plank, and lath and for oyster shells (for mortar or plaster or both). Gray would also have employed other artisans to do any plastering and brickwork.

In the 1780s Gilbert Leigh returned to his native Perquimans County, where he wrote his will in 1791 and died in late in 1792 or early in 1793. (The payment for his funeral expenses was dated January 2, 1793.) The first item in his estate inventory of January 20, 1793, was “2 Chests of Carpenter Tools”; in addition to his tools, household furnishings, and domestic and agricultural equipment, Leigh owned “12 Books 1 Architecters Book.” He left his land and slaves to his wife, Elizabeth, for her widowhood and then to be divided among his sons, Francis, Richard, Thomas, James, and Benjamin. James Leigh, also a builder, became a prominent and wealthy planter who is credited with constructing his own imposing, brick plantation house, known as Land’s End, in Perquimans County, probably in the 1830s.