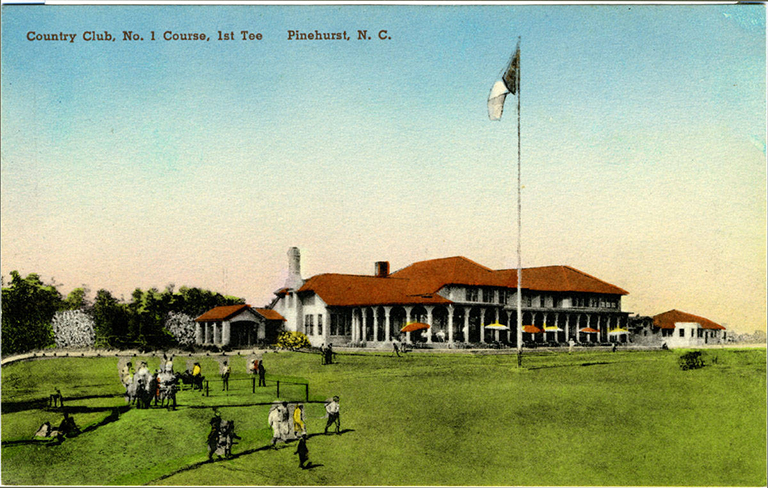 Lyman F. Sise (1862-1943), a native of Massachusetts educated at MIT, practiced architecture in Boston and vicinity and was associated with the firms of Burr and Sise and Haven and Hoyt. Much of these firms’ work was in Boston and vicinity, but they also planned key buildings in the Sand Hills resort community of Pinehurst. Sise and his associates were among a number of Boston architects employed by Pinehurst founder James W. Tufts of Medford and Boston to design the new community’s architecture (see Bertrand E. Taylor). The Pinehurst Outlook of August 1, 1907, recalled that soon after Pinehurst founder Tufts purchased the initial 1,000 acres for Pinehurst in June, 1895, “the work of clearing and building beg[a]n immediately; the original plans for The Holly Inn and many other buildings, being drawn by Mr. Lyman F. Sise, the Medford, Mass., architect.” It was apparently Sise who was most directly involved in the Sand Hills projects for his firms. Sise’s association with Pinehurst was strengthened by his personal connection with Pinehurst founder Tufts and his family: in 1895, at the outset of the development of Pinehurst, James W. Tufts’ only son, Leonard, married Lyman Sise’s sister, Gertrude Ware Sise (1870-1940). Lyman, Gertrude, and their brother Lincoln were the children of the wealthy and socially prominent Albert Fleetwood Sise and Edith Ware of Massachusetts. In 1890, Lyman Sise had married Ann Mason Fowler of an old New England family, and the couple had four children. He died in West Medford, Massachusetts. James W. Tufts had also resided in Medford.

Sise’s first major project in Pinehurst, as noted, was the picturesque, frame Holly Inn (1895 and later), built for Tufts as the community’s first hotel. At that time Sise was part of the firm of Burr and Sise with architect Horace F. Burr (1844-1900), a native of Maine and a Union veteran who practiced architecture in Boston for many years. Burr had worked in the renowned office of Peabody and Stearns before forming a partnership with Sise. Besides the hotel, Sise also planned a number of cottages in Pinehurst.

After James W. Tufts’ sudden death in 1902, Pinehurst continued to grow under the leadership of Leonard Tufts, and included Sise’s additions to the existing Carolina Hotel designed by Bertrand E. Taylor. Sise’s commissions in the area demonstrate the range of romantic and eclectic styles popular at the time. Best known is the famed Pinehurst Country Club (1922), designed in a Mediterranean spirit during his association with the Boston firm of Haven and Hoyt. The principals in this firm were Parker B. Haven (1858-1943) and Edward A. Hoyt (1868-1936). Beginning in the 1880s, Parker B. Haven had practiced for several years with Edmund L. Wheelwright as a partner in the firm of Wheelwright and Haven. Edward A. Hoyt, a native of New Hampshire trained in the offices of Peabody and Stearns, worked as a draftsman and architect with Wheelwright and Haven, and after Wheelwright’s death in 1912, Hoyt joined Haven in a partnership that continued for more than twenty years. Lyman Sise worked with the firm for several years. A final major project in the Pinehurst area is credited to Sise alone—the towering, Jacobean or Tudor Revival style Pine Needles Inn (1927) in Knollwood Heights. The Tufts Archives in Pinehurst includes a large collection of architectural records for buildings by Lyman Sise, Haven and Hoyt, and other architects active in the community, from which additional citations and information may be obtained.