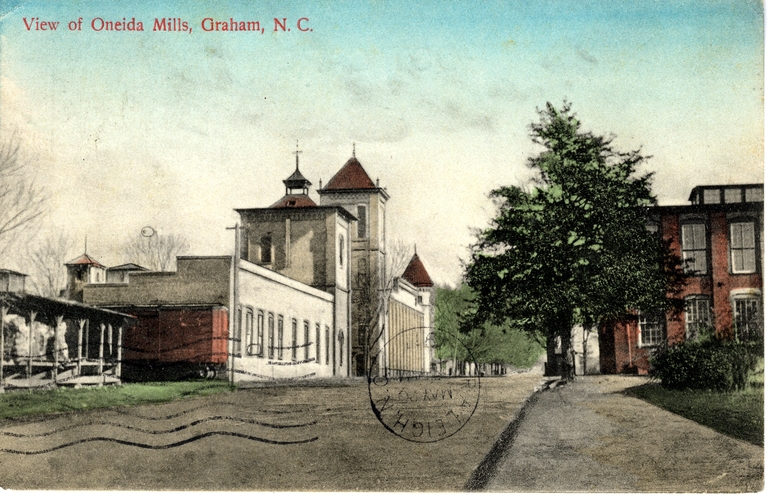 William Carter Bain (January 8, 1839- July 8, 1920) was a prolific and adaptable contractor who epitomized the energetic entrepreneurship of the post-Civil War well into the 20th century. Bain began as a small-town artisan, served in the Confederate army, and became a regional builder and manufacturer. Adapting successfully to changing times during a long working life, he operated a large construction firm in Greensboro that erected many notable buildings throughout Piedmont North Carolina. Because many of his buildings have been lost, and because his work ranged across many towns, counties, and periods, his contribution to the building up of the state has often been overlooked.

Bain was born in the Liberty community of Guilford County, the son of Jonathan Bain (Bane), a cooper, and Lydia Carter Bain. After his father died in the 1850s, young William moved with his mother, brother, and sister to adjoining Randolph County. In 1858 he went to work as a “mechanic” for his brother J. C. Bain in his wagon and carriage making factory. In 1862, after marrying Mary A. Lane of Randolph County, William Bain joined the Confederate army (Company G, 46th N.C. Regiment, Cook’s Brigade), and served until the war’s end. Like many veterans, he made his way in a changed world. He returned home in 1865, rejoined his brother as a wagon-maker, and began a family. After six to ten years (accounts vary), he “went into the building business in a small way.” He left his home territory for a period, for reasons unknown. In 1880 he was listed as a merchant in or near Selma in Johnston County, where he and his family lived near John A. Waddell of the construction company Wilson and Waddell, suggesting a possible association.

During the 1880s, Bain returned to the central Piedmont, where he expanded his operations and formed productive relationships throughout the industrializing region. Like others of the day, he combined contracting with the manufacture of building materials. In 1889 Bain joined with Moses Hammond, L. J. Steed, and others to organize the Hammond Manufacturing Company, a “general wood-working business” located in Archdale, Randolph County, a few miles west of Bain’s family home in Liberty. That firm had begun in 1866 as W. Petty & Company, manufacturing building materials and contracting; however, after founder Petty’s death, his brother-in-law Moses Hammond reorganized the company. The Moses Hammond House in Archdale presents a full sampling of the firm’s output (see Whatley, Randolph County).

After living and working briefly in the tobacco boom town of Durham, by 1890 Bain settled in Greensboro, where he operated the Cape Fear Manufacturing Company (formerly the Greensboro Sash, Door, and Blind Factory). A Greensboro Chamber of Commerce notice ca. 1893 described Bain’s firm as having “operations that are very large… extend beyond the borders of the state, and have won enviable reputation for their integrity and excellent character in their output.” In 1895 Bain merged his business with the Central Carolina Construction Company, which became one of the largest building firms in the Piedmont.

According to a contemporary, Bain was “the builder of some of the principal public and private edifices in the South.” His projects from the 1880s through the early 1900s encompassed a range of building types from banks and civic buildings to resort hotels and residences. He worked in a full spectrum of popular styles, including the Italianate, Romanesque, Queen Anne, and early Colonial Revival modes. Like many contractors, Bain sometimes executed architects’ designs, and sometimes used published designs or his own ideas. Progressive Greensboro of 1903 emphasized that he “undertakes the construction of buildings of any description from architects’ plans, and is prepared to submit estimates at short notice, and to faithfully and efficiently carry out all contracts.” He evidently struck up a relationship with Raleigh architect Charles W. Barrett and constructed two Colonial Revival houses that Barrett published in his Colonial Southern Homes (1903). Later he was contractor for a Greensboro church addition by Charlotte architects Hook and Sawyer, and advertised his services in that firm’s promotional publication.

Bain’s clients included leading industrialists of the day. For L. Banks Holt of the Alamance County textile dynasty, he expanded the Oneida Cotton Mill in Graham and was described as the architect as well as builder of the L. Banks Holt House, a “palatial estate” with a “mansion” lavishly adorned with brackets and millwork. In nearby Burlington, Bain expanded another Holt mill and built the grand James H. Holt House in the Queen Anne style. He probably built other Italianate and Queen Anne style Holt family residences as well. Bain was cited as a builder of tobacco magnate Julian S. Carr’s mansion in Durham, a spectacular $125,000 Queen Anne style residence called Somerset Villa (1887-1888), designed by New York architect John B. Halcott, though Bain’s role among the many contractors and suppliers is uncertain.

Bain took a strong role in developing Greensboro in the 1890s and early 1900s, and he became known for undertaking the “big jobs.” Because of the rebuilding of the city in subsequent years, much of his work has been destroyed and often forgotten. He built the City Hall [City Hall and Opera House] and the Carnegie Library (both of which, now lost, featured arched openings, bold brickwork, and free classical detailing). Among the city’s surviving buildings, he produced the woodwork for the magnificent West Market Street Methodist Church (1893-1894), and built the stone-faced, 6-story “skyscraper” known as the 1904 Dixie Building.

Contemporary accounts indicate that Bain built “a large number of residences,” but his residential work remains largely unidentified. A few examples may indicate the character of others. In Oxford, the Thomas White, Jr. House (1889) displays a lavish Eastlake-Queen Anne style, a house for which the $3,819 contract with Bain specified every item. His own William C. Bain House (ca. 1889) in Greensboro features a simpler Queen Anne style with turned and geometric millwork. In Reidsville, Bain was identified as “the popular contractor from Greensboro” when he was “looking after the conclusion of the work” on the eclectic Main Street Methodist Church in 1893. Reidsville has several ornate Italianate houses that show a kinship in form and detail with some in Greensboro and Alamance County, possibly indicating Bain’s role as contractor or supplier, but no documentation has come to light.

A major opportunity for Bain came with development of the resort community of Pinehurst, laid out by Frederick Law Olmsted in 1895 in the Sandhills. There Bain took the contract for the Carolina Hotel (1899-1900), a grand $100,000 Colonial Revival style building designed by noted Boston architects Kendall, Taylor and Stevens. He also constructed the Harvard Hotel (lost) and probably other buildings in the resort community.

Bain flourished in his business into the early 20th century and continued to take on big projects. He was contractor in 1904-1907 for two college edifices, the Agriculture Building [Patterson Hall] at present North Carolina State University in Raleigh and Spencer Hall at present University of North Carolina at Greensboro. Probably typical of his arrangements for such jobs was the April 15, 1904 contract between W. C. Bain, contractor, and the State Normal and Industrial College of Greensboro, for the “New Dormitory,” which was contracted at $63,975.30 and to be completed by September 15, 1904. (The contract survives at the University of North Carolina at Greensboro.) Bain agreed to “make, erect, build and finish” the structure and to “furnish all materials and labor of every description, also all cartage, tools, scaffolding, etc, etc., for the full completion of the work, in strict accordance with the drawings and the specifications prepared by Hook and Sawyer, Architects, Charlotte, which said drawings and specifications are, and are to be taken and deemed to be a part of this contract by both parties hereto, and where the quality of the workmanship and material is not otherwise specified or shown, the best is specifically implied throughout.” (The contract excluded the heating and plumbing systems.) Payments were to be staged upon satisfactory completion of phases of the work.

In 1906, at an age to retire, Bain had “recently become interested in the manufacture of concrete and artificial stone with good prospects of business in that line” and was president of the Greensboro Fiber Plaster Company, which produced that increasingly popular type of material. The William B. Vaught House, ca. 1906, illustrated in Brown, Greensboro, displays an early use of artificial stone, possibly Bain’s.

In 1917, the 78-year-old Bain was described not only as reliable and experienced but as “a man of advanced ideas” who “keeps fully abreast of the times and is quick to take on all the new ideas and embrace them in his work… Call him up over ‘phone No. 119.” He was a director and stockholder in the City National Bank and the North State Fire Insurance Company in Greensboro and a trustee of Grace Methodist Church in Greensboro. Late in life he had a model farm on the outskirts of Greensboro. His son Edward also went into the local lumber and building materials business.

William Carter Bain’s stature in his day was affirmed by sketches of his career in Greensboro publications and Samuel Ashe’s Biographical History of North Carolina. Yet despite his prominence and the large output of his firm, Bain seldom gained mention in local histories. Many of his principal works—the civic buildings of Greensboro, the showplace residences of industrial leaders—have been lost along with others of their era, supplanted by subsequent generations in fast-growing towns. It is likely, however, that many more buildings may be identified as his work.